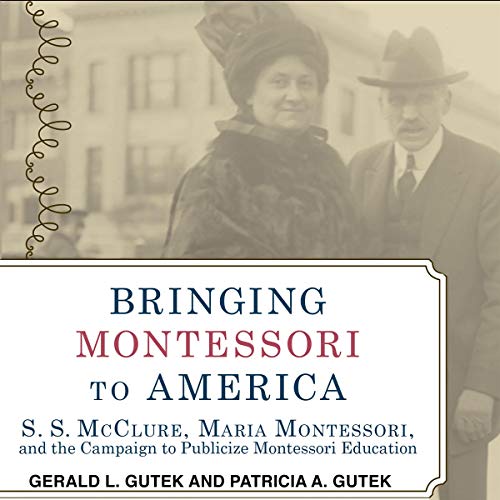 By: Gerald L. Gutek,Patricia A. Gutek
Narrated by: Kevin Murphy

Bringing Montessori to America traces in engrossing detail one of the most fascinating partnerships in the history of American education - that between Maria Montessori and S. S. McClure, from their first meeting in 1910 until their final acrimonious dispute in 1915.

Born on the Adriatic, Montessori first entered the world stage in 1906 as the innovator of a revolutionary teaching method that creates an environment where children learn at their own pace and initiate skills like reading and writing in a spontaneous way.

McClure was an Irish-born media baron of America’s Gilded Age, best known as the founder and publisher of McClure’s Magazine. After meeting in 1910, McClure and Montessori embarked on a five-year collaboration to introduce Montessori’s innovative teaching style in the United States.

The American entrepreneurial spirit, along with a desire to disseminate the Montessori method quickly, led to major conflicts between the Italian educator and American business people, particularly McClure.

The audiobook is published by University Press Audiobooks.

“This engaging book will appeal to a wide range of readers.” (Martha May Tevis, University of Texas-Pan American)

“This study should be a staple and case study for communications departments across the United States.” (Karen L. Riley, author of Schools Behind Barbed Wire)

Really enjoyed hearing about the history of the lady herself and those around her which promoted the method.
It does also have some great little tip bits in here too for those who are interested in actually using the method which should help keep you on track with the true theory, rather than those watered down or corrupted (eg. faith based) versions I've read out there.
Even as a British person which can often dislike the american accents in audio books, this narrator was very good indeed and didn't grate at all - most impressed!
Well done to all those involved here.

This book takes more than 11 hours to listen to. I tried to listen chronologically but as an audiobook, there’s too much unnecessary detail delivered in a wooden manner, I began to get sleepy in chapter 1. So I began to search for when the story explains what happened in the fallout ... it was on chapter 11! It’s horrifying to think how many hours I would have wasted on this book. Having said so, it might be better read rather than listened to. Hats off to the wall-researched detail, but overall it was simply too much detail to tell a story well.