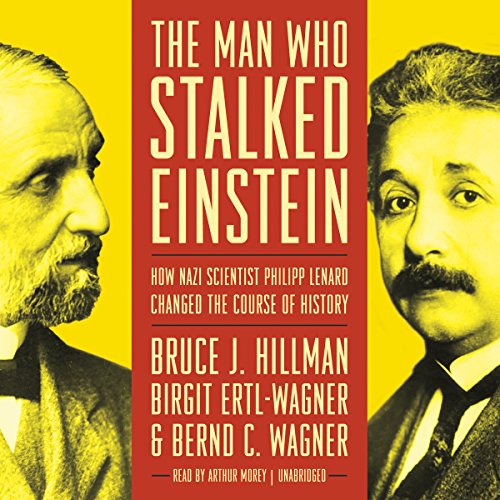 The Man Who Stalked Einstein

By the end of World War I, Albert Einstein had become the face of the new science of theoretical physics and had made some powerful enemies. One of those enemies, Nobel Prize winner Philipp Lenard, spent a career trying to discredit him.

Their story of conflict, pitting Germany's most widely celebrated Jew against the Nazi scientist who was to become Hitler's chief advisor on physics, had an impact far exceeding what the scientific community felt at the time. Indeed, their mutual antagonism affected the direction of science long after 1933, when Einstein took flight to America and changed the history of two nations.

The Man Who Stalked Einstein details the tense relationship between Einstein and Lenard, their ideas and actions, during the eventful period between World War I and World War II.

What listeners say about The Man Who Stalked Einstein

Bruce J. Hillman, M.D. is Professor of Radiology at the University of Virginia School of Medicine, and a well known medical researcher. Dr. Hillman tells the little known story of the antagonistic relationship between Albert Einstein and German physicist Philipp Lenard. Both were brilliant German born scientist, both received the Nobel Prize in Physics, Lenard in 1905 and Einstein in 1921. Einstein was a Jew and Lenard an anti-Semite. Their ideals were diametrically opposed to one another as was their scientific viewpoints. Lenard was an experimentalist and developed some of the early instruments for producing x-ray. Einstein was a theorist who specialized in time and space. Lenard hated and publicly mocked Einstein and went on to join the Nazis. Einstein left German for the United States. Hillman makes this story a conflict between a German Jew and a Nazi.

Hillman is a good story teller. The story takes place in the 1920s and 1930s; the time period between World War One and World War Two. With all the similar turmoil in the world today, it is interesting to learn how the world turmoil then resulted in the rise of the Nazis. I think I am going to read John Cornwell’s “Hitler’s Scientist” published in 2003. I understand Cornwell also covers the Lenard-Einstein conflict. For those readers interested in physics and the history of science under the Nazis, this is a great book to read. If you are not interested in science, the reader will be bored as Hillman goes into depth about physics. Arthur Morey does a good job narrating the book.