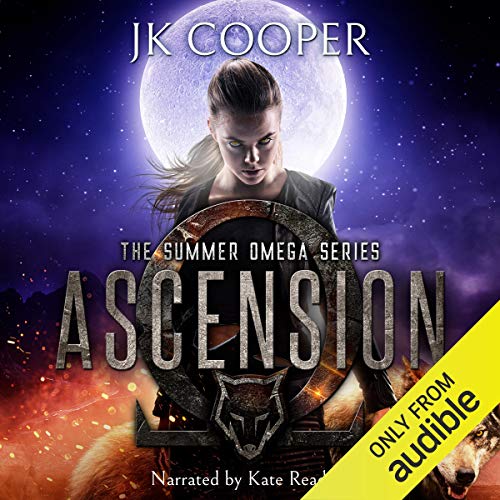 Shelby Brooks is the Summer Omega of whom werewolf Mystics have long prophesied. She and her bonded mate, Kale Copeland, have awakened and discovered who they truly were - and who they must become. Their former world of Alsvoira suffered the wrath of Mareus, the Alpha Prime, and his failed attempt to bring about the Advent through Ascension. Now on Earth, Mareus, and his daughter, Athena, are determined to succeed in ushering in the Advent.

Shelby must race against Athena to unlock the keys of Ascension before the Advent destroys all she loves. Her unique bond with Kale may give her an edge as she fights to save her pack and Earth, but Athena has plans for their intensifying relationship. All bonds, even those forged by prophecy and eternal love, can be shattered.

What listeners say about Ascension

Just as good as the first!

Wow, the world of the summer omega just got a whole lot bigger. So much more depth. And the romance between Kale and Shelby deepens despite growing threats. I LOVE THE ENDING SCENES. So much revealed, and so much...well, I'd give away too many awesome spoilers. It's awesome awesome awesome!

OMG OMG OMG I didn't leave a review for the first book holy #%$^@&# this book is awesome! Summer omega series is one fo the best paranormal romances out there right now. YA or adult, this books bridges a lot of ages. You got the hot, navy seal dad, the hot boyfriend who is learning to become the Alpha, the hilarious Bubba and Swearing Sadie...just drives me "bat feculence crazy" to wait for the next book.

Un-cussing-believable that I have to wait for book 3. The injustice of it all. Alas, we mortals must wait upon the godlike authors, like JK Cooper, to have mercy upon us and release more awesomeness. Shelby is such an awesome character. Moody, caring, firm--and lots of hypocritical behavior. Flawed, just like all of us. Except she's a werewolf. So there's that, I suppose. Wish this book had more Bubba and Sadie! BUT learning about some new characters was really fun too. I love the bandrui lady or however you spell it. Seems this series is more complex than simply a regular PNR.

This book is so much more...

The school year is getting underway and we're looking forward to more teenage angst... and werewolves. In Ascension, we run headlong into a prophetic legend as it starts to unfold A legend of the Summer Omega, her Ascension, and with it, the burning of the earth, and afterwards, the Tears of Redemption... All of a sudden the trivial concerns of school no longer matter! This book is so much more than a mere coming-of-age, shifter story! With corrupt and greedy forces determined to subvert the true prophecy, it's time to choose sides, but which one, with hunters, werewolves and wiccans joining ranks to fight?   You'll have to get the book to find out how it all shakes out! Once again, Kate Reading gives a stellar narration performance. The woman is simply amazing!