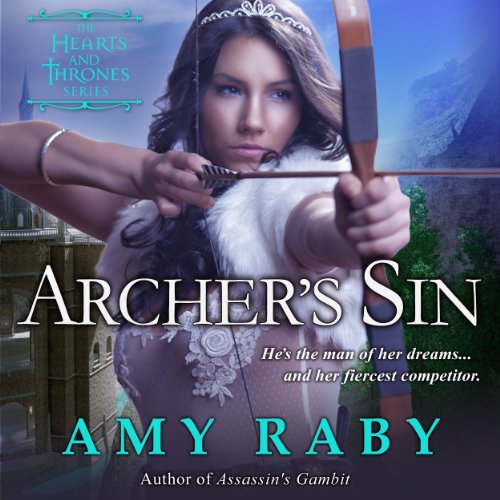 Until she meets one of her fellow competitors, and he sends an arrow straight into her heart.

Justien Polini is the man she's always dreamed of. Like Nalica herself, he's from the rough country in the eastern highlands. He's big and strong and handsome, and he's nearly as good an archer as she is. Best of all, in a country where most men look askance at women warriors, Justien admires Nalica's talent and strength.

But Nalica can't let her personal feelings get in the way of her ambitions. The tournament must come first...and there will be only one winner.

This novella of approximately 100 pages is a companion to the Hearts and Thrones series, featuring two characters who play a supporting role in other books. It is a standalone story, but readers of the series will recognize some of the characters.

What listeners say about Archer's Sin

Where does Archer's Sin rank among all the audiobooks you’ve listened to so far?

I would rate it the best of all the audiobooks that I have listened to. All around there are no real weaknesses. The story is a wonderful addition to the series introducing new characters that pop up again in later books (but would still be enjoyable as a stand alone introduction to the series). The narrator Lauren Sweet does a really nice job that does justice to this gem of a story. Unlike a lot of narrators she doesn't go too far out there with her voices, yet still does a good job of defining each character's voice. It was very pleasant and relaxing to listen to. I would definitely look for more from this author and narrator.

What made the experience of listening to Archer's Sin the most enjoyable?

I love reliving books I've already read on Audible. This was a relatively short read and I was able to relive a great book while exercising.

My favorite character is by far the lead, Nalica. She's a fantastic archer, war mage, and badass!

Would you be willing to try another one of Lauren Sweet’s performances?

Probably not. I think her voice is better suited for female lead characters who are much more girly. This leads me to think of historical romances or contemporary romances for her. I don't like to listen to those types of books, so most likely won't be interested in her readings.

Yes but I can't describe it without sharing some serious spoilers.

For the Book:Luckily for me, I was able to Beta Read this for Amy Raby. (That in and of itself was pretty exciting for me!)Anyways, first of all, as an archer myself, the fact that this book was completely about an archery tournament really had me pumped up for the story. I was not disappointed! As for the characters, Nalica has become my favorite female thus far in the Hearts and Thrones Series. She's strong and confident in herself, but not in an annoying way. She also shows her feminine side, too. I found this to be so awesome because even the toughest of women have their weak points. Justien, was every bit the great guy we all fall for. He's strong and confident, too (however, at the beginning maybe a little too confident, but he grows from that and it proves to be pretty funny.) He also does what's right, even though it may take him a little bit of thought to determine what he feels is right.As far as the story line, it wasn't solely about the archery tournament, which I was happy to discover as well. I always like being surprised by a book.This is a great short story, and I would suggest that if anyone was interested in trying out Amy Raby, this would be a good place to see if you like her writing style. However, this novella does come between the first and third books chronologically. It would be a spoiler for Assassin's Gambit. However, it really doesn't spoil anything from the second book. So if you're crazy about reading things in order, start with Spy's Honor, then read Assassin's Gambit, then Archer's Sin, then Prince's Fire. I will be buying the final version, because I want to support this fantastic author, and just because that's what would be right.

Did Lauren Sweet do a good job differentiating all the characters? How?

Character voices were decent, but Sweet has an odd, repetitive cadence in her narration I found very distracting at first.