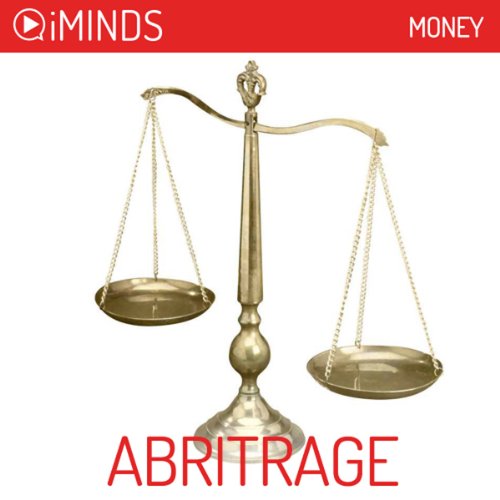 By: iMinds
Narrated by: Emily Sophie Knapp
Try for £0.00

This is a clear explanation of the risks and potential rewards of arbitrage, with an emphasis on the many ways the practice can go wrong. Performer Emily Sophie Knapp narrates in clean, if somewhat flat, tones as she describes both the academic theory of arbitrage (in which such transactions are risk-free) and the real-world complexities that make the attempt to profit through arbitrage transactions so perilous for all but the most lightning-quick. A recommended listen for those who need a quick, concise, and targeted explanation of the concept.

Arbitrage is defined as attempting to profit by exploiting price differences of identical or similar financial instruments between two or more markets. The difference between the two market prices is the profit or spread. The term is usually used to describe transaction involving financial instruments such as stock, bonds, commodities, currencies and derivatives. A person or institution that practices arbitrage is known as an arbitrageur.

When used academically, arbitrage refers to transactions in which there is no negative cash flow at any stage, and at least one state where there is a positive cash flow. Put simply, it is the prospect of making a profit without any risk or cost for the investor. However, when the term is used in real world situations, it may refer to the expected profit, as there is always some risk and execution time involved in arbitrage transactions. While the concept is risk free in theory, the complexity and volatility of real world markets make the process more perilous than it initially sounds.

iMinds will hone your financial knowledge with its insightful series looking at topics related to Money, Investment and Finance.. whether an amateur or specialist in the field, iMinds targeted fast knowledge series will whet your mental appetite and broaden your mind.iMinds unique fast-learning modules as seen in the Financial Times, Wired, Vogue, Robb Report, Sky News, LA Times, Mashable and many others.. the future of general knowledge acquisition.

What listeners say about Arbitrage

Very short but interesting enough to give it a listen if you need to kill time and are interested in the topic.