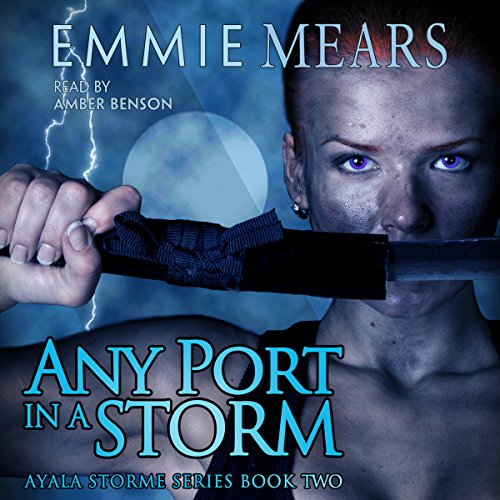 Any Port in a Storm

By: Emmie Mears
Narrated by: Amber Benson
Try for £0.00

After months of training a budding army of human/demon hybrids, Ayala and Carrick have worked out most of their differences. Who gets to use the bathroom first in the morning. Who'll feed the bunny before they go out to make mayhem. Who gets to keep the jeeling claw they found in Forest Hills. You know, the important stuff.

But when Gregor sends them out with their battalion of shades and the mission quickly lands on the wrong side of Ayala's "don't kill norms" moral line, she quickly discovers that maybe morality wasn't the motivator behind Gregor's pet project - or at least not when money's involved. And when a trio of shades starts murdering the populace in Nashville again and targeting places and people significant to Ayala, her desire to help her own comrade shades stay on the good side of the Mediators will place her at their mercy again. With the Summit fracturing and demons closing in on the city, saving the shades and herself may cost Ayala everything.

What listeners say about Any Port in a Storm

While it took me a bit to warm up to Storm in a Teacup, it didn’t take any time at all for me to enjoy Any Port in a Storm. I’m more familiar with the rules of Ayala’s world and am accustomed to Amber Benson’s voice as Ayala.

The world building in this series does come slowly, but it’s there. I know some readers, like me, enjoy the world building and want a lot of it up front. Others want to jump into the action and learn what’s needed when it’s needed. It can be “a rock and a hard place” for an author.

In Any Port, Ayala is learning to let others in despite her childhood with the Summit and the dangerous nature of her life–first the Shades she wants to protect, then other mediators who are on her side. Opening her heart means being more vulnerable, but it also means help and company and love.

The main thrust of the story is deciding who can be trusted. Someone in the Summit isn’t who they claim to be, and Ayala has to solve the mystery before everyone she loves dies. I think this mystery, and its very personal nature, really pulled me into the story. I’m so glad I finally tried this series. I’m now an Ayala fan.

Copy provided by Audible Studios in exchange for an honest review. Review courtesy of onebooktwo | one book, two reviews.

Love these books. Who would think that a story of gouls and devil hoards could be set around the "Grand Old Opry"? I believe this set has caught me. I've go to to get the next in the series! PS, the reader is Great!!

I liked this book, better than the first one of the series, but the narration was really bad. The cadence was strange, and when the narrator reads other characters' voices - particularly male ones - she sounds like a woman trying unsuccessfully to sound like a man. And Ayala's boss sounds like Minnie Mouse!

a wonderful urban fantasy.i love the characters and the story plot. the ending is a surprising twist. i really am looking forward to the next story in this series.

Ayala is fighting for herself and loved ones

I’m surprised at the depth this audio gave me. The first book in the series I had to get “used” to, but this second book really moved the marker up a few notches.

Ayala’s world is somewhat complicated. She is still snarky and swears a lot, but I’d do that too if I had had to deal with hordes of demons. Besides the Hellkin that are flooding the place, someone in the Summit is just wrong. She needs to protect the Shades and the Shades are learning humanity as quickly as they can (reading romances for goodness sake!), but they are also disappearing. Ayala doesn’t know who she can trust to cover her back and while she’s fighting the good fight, she still has the mystery of who is betraying her to figure out.

This second book is amazing and I found it perhaps better than the first. Great character development, excellent pacing, awesome story.

A solid entry in a series with a lot of promise

I went into the first book in this series with sub-basement level expectations and was delightfully suprised.

This book continues with all the things which impressed me about the first book, Ayala continues to be an interesting and flawed character who is just trying to do the right thing (while coping with a society trying to convince her she is in the wrong).

I love the fact that these books emphasize friendship and human relationships so much more strongly than romance. It has a lot of the things I love about urban fantasy ( the magic, the non-humans and interesting world-building) while avoiding a lot of the tropes I hate (the alpha males who are in charge of everything, the focus on sex over trying to save the world, the hero who resolutely goes it alone while carrying the idiot-ball)

I love the shades and their burgeoning non-human society.

The only reason I'm not giving this book five stars is that it felt a little scattered, I would still very much recommend this series.