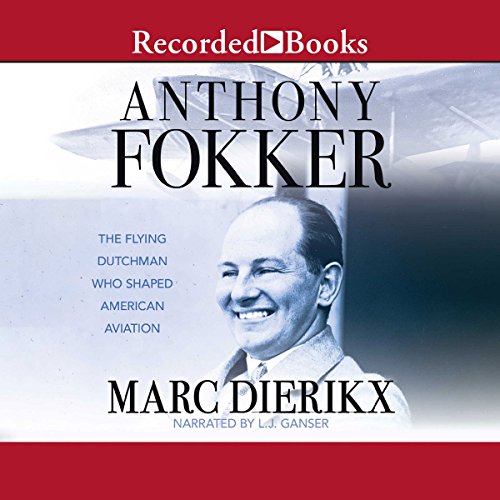 Anthony Fokker: The Flying Dutchman Who Shaped American Aviation tells the larger-than-life true story of maverick pilot and aircraft manufacturer Anthony Fokker. Fokker came from an affluent Dutch family and developed a gift for tinkering with mechanics. Despite not receiving a traditional education, he stumbled his way into aviation as a young stunt pilot in Germany in 1910. He survived a series of spectacular airplane crashes and rose to fame within a few years. A combination of industrial espionage, luck, and deception then propelled him to become Germany's leading aircraft manufacturer during World War I, making him a multimillionaire by his mid-20s.

When the German Revolution swept the country in 1918 and 1919, Fokker made a spectacular escape to the United States. He set up business in New York and New Jersey in 1921, and shortly thereafter became the world's largest aircraft manufacturer. The US Army and Navy acquired his machines, and his factories equipped legendary carriers such as Pan American and TWA at the dawn of commercial air transport.

Yet despite his astounding success, his empire collapsed in the late 1920s after a series of ill-conceived business decisions and deeply upsetting personal dramas. In 1927, aviator Richard Byrd solicited a Fokker three-engine plane to be the first to fly non-stop across the Atlantic. The plane was damaged on a test flight and Charles Lindbergh beat him to it. Lindbergh's solo adventure in the Spirit of St. Louis earned him - and cost Fokker - a lasting place in the history books.

What listeners say about Anthony Fokker