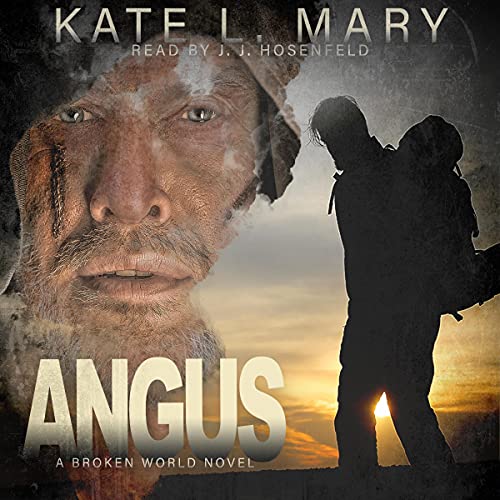 Angus James has played many roles in his life, but none have prepared him for the one he now finds himself in. Alone for too long, traveling the wastelands of what was once the United States, he’s all but given up hope of ever seeing another living person.

Then, he finds her.

Naya is a tough and resilient kid, but she’s alone in a world full of creatures intent on wiping out what’s left of the human race, and Angus knows it’s up to him to keep her safe. And for once in his life, he’s determined to get something right.

Battling nightmarish creatures, feral animals, harsh conditions, and even their own demons, Angus and Naya must work together if they want to survive. But being with another person after years on his own brings up painful memories Angus had thought were long forgotten, making the journey as heartbreaking as it is treacherous. It gives him something else as well, though. Hope. And that’s something he never thought he’d have again.

What listeners say about Angus

I have thoroughly enjoyed the story of Angus, remembering the past and his loved ones. I feel invested in the rest of his life and would love to hear another adventure about him or Nia!

I absolutely loved this book, Angus's story has to have been the most moving of them all, I could see him coming to life the more he was around Nya, although heartbreaking at times as he relived his memories. This was the best book in a fantastic series with excellent narration, and totally deserves 5 stars across the board, I can't recomend it highly enough. I received this book in exchange for my honest review.

I received this audiobook via a promo code and this is my voluntary review.

The Zombies are dead but the horror isnt over, new hybrid monsters have arisen from Stars experiments to take their place, the ultimate killer like the creatures in the 2018 Movie Hostile. if you aren't very good with picturing a visual... those are exactly what you are looking for, right down to the milky eyes, hairless & pale complexions and hatred of sunlight. This book definitely has The Last Of Us/I Am Legend vibes as Angus travels across his broken world to get Naya to safety.

I have followed Angus from Broken World right through to Twisted Fate. I cheered when he finally killed Star and got his family back and I cried when he lost Jane. This is his swan song but I guess I just hoped for a happier ending for Megan&Donaghue, Vivian&Axl, Lily&Al etc and their kids.

I enjoyed the book overall.
Narration is great.

Oh and for anyone who needs to play catchup with the series, the Oaklahoma Wasteland and Twisted World Series were recently released as boxsets :)

This was a highly enjoyable book I have listened to the other books in the series and that I'm sure helped. Only downside I would say is that there are too many sad moments.

Death galore in this book; any semblance of a happily ever after for the characters from the Broken World and Twisted series is destroyed. The experiments on Angus have caused him to be long living, so he’s outlived all his family and friends; things have not been rosy for the characters from these connecting series. Angus thinks he’s all alone, but runs into a young girl and her mother; the mother is dying and asks Angus to protect her daughter. Angus and the girl set out in hopes of finding a new settlement they can be part of; it’s rough going through the zombie lands. They are dealing with some hybrid zombies; a more aggressive and faster type of zombie. The story goes back and forth between Angus’ present day and memories from his past.

The writing is good and there are some interesting parts, but pretty much the only storyline is Angus remembering the past; some details about his life before the outbreak, his love for Parvati, but mainly about how the people in his life died. His memories jump around in time a lot too, so it felt disjointed at times, but I did enjoy learning a bit more about those characters. Just too bad they weren’t many happy moments for Angus and the rest.

Overall, I think I’d have been fine not reading this; probably better off because I could’ve kept imagining that the characters from this series some how found a way to live long, happy lives in this crazy world they found themselves in. That’s not this series though; this series goes for a more doomsday/possibly more realistic way of ending things. I’m going to go with a 3 rating. Good writing, good bones, but just not how I want the stories I read to go.

Angus had been plodding across the countryside for decades, south in the winter, north in the summer. He had met survivor after survivor, appreciating the company until each of them passed away, and he moved on. As an immune long-term survivor, medical science {CDC} apprehended him, experimenting on him for twenty years until his escape. The CDC, through their experimentation, had physically changed Angus. The most noticeable change was that his wounds healed very quickly; there may be other effects. Now, he had not seen another living soul for years. Angus was lonely and depressed with many regrets. There was nothing else for him to do but move on; one more day. Until Naya, a young, dark-haired girl of fourteen standing before him. Much of the story detailed the background of Angus, highlighting his brother Axel and wife Viviann, his ex-wife Parv, and his daughter Glitter. Angus recounted many, many flashbacks, some for his introspection, some for Naya. The friendship with Naya became a relationship and they depended upon each other. It’s a beautiful story about change, understanding, self-examination, and sadness; so much sadness. It’s a bit slow at times but I just kept listening while thinking about how certain things related to my life. The past is full of memories, lost family, friends, and lovers. All that’s missing for me are new friends and lovers. Thanks for the tale, Kate. I was given this free review copy audiobook at my request and have voluntarily left this review.

Angus James has lived a long life, got up close and personal with death many a time, and managed to survive. Alone for years now, Angus has lost hope. Further, he finds himself struggling with being in the company of a young girl named Naya. Naya lost her mother to a zombie bite and now Angus is responsible for her and her for him. Together they seek safety, but Angus is not sure he will survive being in the presence of another living human as Naya’s presence is dredging up memories he had buried long ago, memories of his wives, his daughter, friends, and more. For Angus, he’s not sure if a zombie or his memories will kill him first!

Kate Mary, the author, has created a life and a world for Angus to inhabit, and while this is book eight, it can be read as a stand-alone. She carefully fills in enough detail of Angus’ backstory that the memories tormenting Angus are complete and understandable. We can not only understand his grief and angst but feel it as well. We are shown his humanity and ability to hope which Angus does not even realize exists within him. I enjoyed this story about Angus and will most likely check out the rest of the series. Mary is a creative storyteller weaving details and emotions throughout this book.

The narrator, J J Hosenfeld gives Angus a strong yet weary unique voice that helps keep the listener hooked. His other voices are well-done for Naya and others, but it is the voice of Angus that is mesmerizing allowing the listener to feel his tiredness, his experiences, and his age.

This is a reflective book with zombies that is a must listen!

There were no issues with the quality or production of this audiobook, it was clear and well produced.

Disclaimer: This Audiobook was provided free of charge by the author, narrator, and/or publisher in exchange for a non-bias, honest review.

I am so glad to learn about Angus and the rest of the groups' future. So many characters that I cared about, I now have learned their fates. Angus is such a s.o.b. in the beginning of the series, but he grows on you til you wind up liking him best of all. I enjoyed this audiobook so much, I immediately listened to it for a second time.

I loved this audiobook!!! 💜 💜 💜 💜 I have listened to all of Kate L Mary books and this definitely outdoes the others in the series. It definitely connects all of them together. It is a bitter sweet story that is also heart wrenching. She has a wild imagination that will Capture your attention and you have to listen to all the books To get the whole picture. She has a fascinating way of creating world what are unique and sometimes horrifying. If you haven’t listen to it you need to it’s definitely a must.
The narrator does a fantastic job with the characters and the voices of each character making it easy to distinguish between the characters. ( Which in books is a must).
He lets is voice have the right amount of emotion to bring the characters to life. I definitely recommend this audiobook!! 💜 💜 💜 💜

I absolutely love the story but was. disappointed in narrator's voice of the characters, that was very hard to listen to. Kate L Mary did not disappoint as usual.