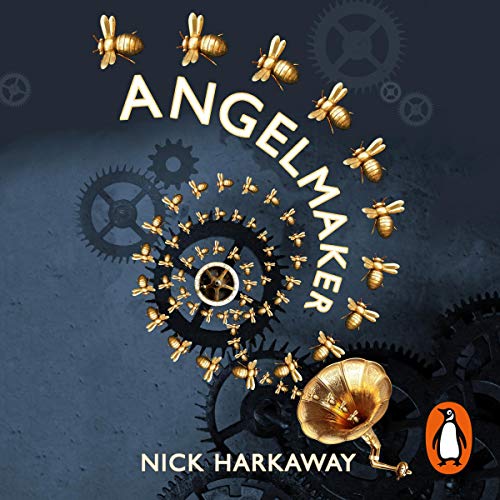 By: Nick Harkaway
Narrated by: Daniel Weyman
Try for £0.00

From the acclaimed author of The Gone-Away World - a new riveting action spy thriller, blistering gangster noir, and howling absurdist comedy: a propulsively entertaining tale about a mobster's son and a retired secret agent who are forced to team up to save the world.

All Joe Spork wants is a quiet life. He repairs clockwork and lives above his shop in a wet, unknown bit of London. The bills don't always get paid and he's single and has no prospects of improving his lot, but at least he's not trying to compete with the reputation of Mathew "Tommy Gun" Spork, his infamous criminal dad.

Edie Banister lives quietly and wishes she didn't. She's nearly ninety and remembers when she wasn't. She's a former superspy and now she's... well... old. Worse yet, the things she fought to save don't seem to exist anymore, and she's beginning to wonder if they ever did.

When Joe fixes one particularly unusual device, his life is suddenly upended.

The client is one Edie Banister. And the device? It's a 1950s doomsday machine. And having triggered it, Joe now faces the wrath of both the government and a diabolical South Asian dictator, Edie's old arch-nemesis. With Joe's once-quiet world now populated with mad monks, psychopathic serial killers, scientific geniuses and threats to the future of conscious life in the universe, he realises that the only way to survive is to muster the courage to fight, help Edie complete a mission she gave up years ago, and pick up his father's old gun....

"Angelmaker is one of the most enjoyable books I’ve read in ages...a joyful display of reckless, delightful invention, on a par with the rocket-powered novels of Neal Stephenson.... Ideas come zinging in from all corners, and do so with linguistic verve and tremendous humour. ... It’s brilliantly entertaining, and the last hundred pages are pure, unhinged delight. What a splendid ride." (Patrick Ness, Guardian)

"It hangs together so brilliantly…It’s an ambitious, crowded, restless caper, cleverly told and utterly immune to precis…From its frantic oscillation between plausibility and fantasy emerges an odd, unique composite that deserves its own moniker. ...Angelmaker turns out to be a solid work of modern fantasy fiction, coupling credit-crunch anxiety with an understandable nostalgia for the mythical days of “good, wholesome, old-fashioned British crime." (James Purdon, Observer Guardian)

“Angelmaker is an intricate and brilliant piece of escapism, tipping its hat to the twisting plots of John Buchan and H Rider Haggard, the goggles-and-gauntlets Victoriana of the steampunk movement and the labyrinthine secret London’s of Peter Ackroyd and Iain Sinclair, while maintaining an originality, humour and verve all its author’s own… Angelmaker must have been huge fun to write, and it is huge fun to read.” (Daily Telegraph, five stars)

What listeners say about Angelmaker

Now that is a great book. just so clever. you will

want more. This is what I hoped Rivers of London would have been like. It is a world war drama mixed with fantasy and mad ideas. a perfect mix and great characters. Witty, nasty and all round good. It is a book I will listen to again. Thank you for this one. well written very well read

This is a hugely imaginative story populated by unusual and eccentric characters and conferred around a doomesday machine powered by bees and clockwork. The story takes the hero on a journey of self discovery during which he suffers many trials and uncovers many old family secrets finally realising that there comes a time to turn nasty to win through.

The narrator is superb giving each character their own distinct personality, even the semi-blind one toothed pug

Overall an excellent listen masse all the more enjoyable by the skill of the narrator.

Took me a little while to work out the tone of this book - comic supernatural thriller, spy story, gritty crime drama? (It's all of these). However, I very quickly got hooked and thoroughly enjoyed this, particularly the adventures of Edie Bannister. The author writes very well, with a light touch that made me laugh out loud at times, but also describing some pretty gruesome episodes unflinchingly. The narrator is excellent at capturing the voices of the different characters and getting the right tone. The fights are really exciting! I shall be looking out for more from this writer in the future.

I do not ever remember enjoying a book more. The story is delightfully daft, but even if you hated the story, the prose is just glorious. Within minutes I was hooked and in love with this book. I have walked around London smiling, laughing and occasionally crying as I listened. I mourn its end.

This title was a lucky find, both author and narrator unknown to me, but neither disappointed. The tale started small but the original ideas and detail of the writing drew me rapidly, building a sympathetic relationship with the characters, the twists and turns of the plot un-telegraphed and followed through to a pleasing finale. Daniel Weyman's reading was thoroughly enjoyable and I highly recommend this.

So good I had to do it twice

Brilliant story of secret service and crime in a steam punk style. Superb characters. I listened to this last year and just had to do it again. and second time round it was like a new story. no doubt I will do again next year!

What made the experience of listening to Angelmaker the most enjoyable?

After the first few pages, this book is addictive.

Edith Bannister and her wondrous life

Which character – as performed by Daniel Weyman – was your favourite?

The interrogation of Mr Cummerbund

Listen to it NOW

I read the book and liked it a lot, but the reading really makes this sparkle. Enjoyed every second!

This is a brilliant book, beautifully delivered by Daniel Weyman whose ability to switch between voices if quite extraordinary. A cleverly constructed book, it was a little bit too gruesome in a couple of places - the repeated torture of the bishop was too much for me - but it was a very enjoyable "read". Some of the detailed explorations of topics /themes are gorgeous.

Nick Harkaway is an author I will be keeping my eye on for the future and I am anxiously waiting for another of his books to be available on Audible. This was one of the first Audible books I downloaded and it certainly got me hooked. My drives to and from school are now considerably more bearable.

One of the strangest listens in a long time

This was a strange, but most impressive - listen. Very few books I have come across are as well-written as this one, ever on its toes with lightly humourous, occasionally flippant, details interspersed with scenes of cruelty and amazingly imaginative twists.

I dare any reader to forecast what happens next. I did not even try, and I wouldn't have had a chance. If comparable to any other books in its stunningly original style, numerous twists it must be to those of Haruki Murakami. Yet Harkaway is no copycat, but has a style very much his own.

The book is as far from Dan Brown as anything, but fascinates in so many other ways. It toys with its readers, and Daniel Weyman is absolute supreme in his narration.

Great book and brilliant performance by the reader.

One of the greatest joys in life is discovering an author that paints masterpieces in your mind.

Not believable in the slightest, but that’s the point. A fun and adventurous story with the most delightful characters.

Just a bit too silly.

This is the first book I've listened to by Nick Harkaway and I didn't really know what to expect. The story is so ridiculous that I'm having trouble para-phrasing it. It's the story of a watch/clockwork maker (Joe) who gets embroiled in events that his crazy genius grandmother began when she embarked on a personal mission to make the world a better place through some kind of never really explained soundwaves (?) that mechanical bee's make when released into the world.

Joe gets thrown into a lot of different situations while being hunted down by various authorities and organisations and there is also a lot of background story about Joe's grandmother's lesbian lover (Edie) who happens to be a secret agent of some kind. This is to give the history of the mechanical devices and some background history of the characters. However the main problem I have with the story is that Joe is really hard to emphathise with. He's not an interesting character even though a lot of stuff happens to him. So I ended up not really caring whether he lived or died. And bizarrely his character changes with about a quarter to the book to go and he transforms into a gun waving gangster boss that his deceased father used to be. This shift doesn't endear him to me in any way nor did it's abruptness seem all that plausible.

I also found the writing style to be a bit awkward. It didn't seem to flow as well as some writers do. I am quite fond of Terry Pratchett books and I like fantasy and fiction. I think that Angelmaker could have been quite good if the way his characters reacted to events were a bit more believable and the listener could empathise with them more.

The performance of the book was really good and probably the main reason why I finished listening to it.

What would have made Angelmaker better?

Angelmaker would have been better if it had never been published. It was too far from any reality I have ever experienced or imagined. I must be getting too old and crotchety. But this really was bizarre and was not enjoyable. Perhaps those who immerse themselves in bizarre fantasy might have a different view. I kept hoping it would get better but now I wish I had cut my losses and given up part way through the book. Or better that I hadn't bothered with this book at all - but I let myself be persuaded by a recent newspaper review by Australian writer James Bradley.

My next listen will NOT be anything by Nick Harkaway (or James Bradley for that matter). In fact I'll probably never read, or listen to, anything by either of them again. Now I'll look for something related to the world that I know or at least a world that I can imagine or relate to.

Have you listened to any of Daniel Weyman’s other performances before? How does this one compare?

I do not recall listening to this narrator previously. His performance was reasonable, given tne material he had to read from.

This book evoked disappointment that I had wasted money buying this audiobook and then wasted time listening to it. I was also annoyed with myself for letting myself be swayed by a dud book review in a newspaper.