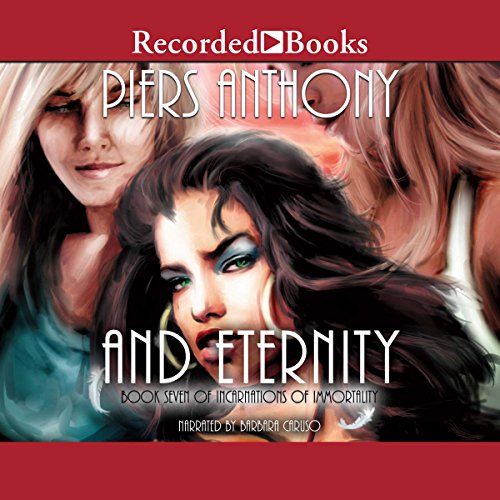 By: Piers Anthony
Narrated by: Barbara Caruso
Try for £0.00

In the triumphant finale to the Incarnations of Immortality series, the Incarnation of Good dominates. Orlene has died and we follow her into the afterlife. Joining forces with two women--Jolie, Satan's consort and Vita, a troubled mortal--they will test the limits of morality.
©1999 Piers Anthony Jacob (P)2002 Recorded Books, LLC
Epic
Show More Show Less

What listeners say about And Eternity

What an excellent read, or perhaps listen!

I am totally enthralled by this series. It has made me seriously rethink my approach to my life.

A great series that intertwines the stories and characters expertly, and you are pulled into the world of the Incarnations of Immortality.

It's like being with friends, and being part of their world. Don't we all at some point want to be that important person... generally not realising that we already are.

A great end (sort of an end) to the series.

Came across these books stashed away during a Remodel from Hell (no pun intended) and after a bit of a re-read was pleased to see that Audible had the entire unabridged series available for purchase. A good use for those pesky monthly credits.. Bio, Incarnations, and next will be the Adept series.

A bit of trivia for fans of this series, I learned a few years back that the author had written another book to round out the series - "Under a Velvet Cloak", based on Nox, the Incarnation of Night, and featuring Jolie the Ghost. Reviews of the book are mixed, but certainly worth reading for fans of the series. Unfortunately it appears that Book 8 did not get the Audio Book Treatment, so books 1-7 are all there will ever be here at Audible.com.

Very good wrap-up to the series!

Great story, I found myself nor able to stop listening. Loved the twists and turns. Overall I would recommend the entire series!

After multiple instances where the main character defended the ideas of rape and pedophilia, I just could not finish this book. This was a serious disappointment from a series with an otherwise intriguing premise.

A supposedly "good man" encouraged a woman to infidelity. My enjoyment ended then. Hard pass.

This book takes a different tack from the prior ones. THis time we step into the shoes of Jolie, who since the events of For Love of Evil has been the companion of Gaea, the Incarnation of nature. During an assignment to survey various mortal men as possible candidates to become Incarnations, Jolie learns of the death of a friend she's guarded since childhood. That friend turns out to be Orlene, the ill-fated lover of Norton from Bearing an Hourglass. Arriving too late to save her friend, Jolie vows to help the grieving mother find her baby's spirit so the two of them can be together in the afterlife. THat quest quickly turns into something much bigger as the two find themselves taking charge of Vita, a drug-addicted young whore who ran away from home after an assault. Though initially none too thrilled with her uninvited guests, Vita quickly warms up to the two spirits and becomes a willing participant in their quest, which just might settle the eons-old struggle between good and evil once and for all.
As before, Barbara Caruso delivers a very worthy narration. To be fair she does slip up a bit initially with her portrayal of Nox, the enigmatic Incarnation of night, but she soon rediscovers her footing there. All in all a worthy listen and a worthy conclusion to the series.

Masterful conclusion to the series.

An excellent read/listen. Piers Anthony is perhaps my favourite author with an excellent world view.

Who edited these books?

chapters don't line up with the books. lost my spot due to app glitch and now it's very difficult to find the mark I was at. Also, sound volume goes up and down driving me to turn volume up and down constantly.

great book!
I love anything by this author . he is such a great writer if like sci fi and fantacy. heakrs it feel like you are right there.

Book is great, reader is only average.

pronunciation is off from proper on some things, and is incongruous to others in the series on other things.

Great book though. Love it and have read and listened to it many times!

Great end to an interesting series

This was a great end to an interesting and thought inducing series. Narrator was great.