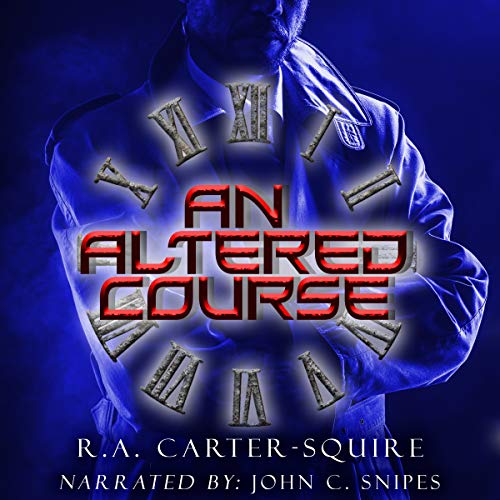 When a friend is in trouble, no barrier is too great; not even decades.

Driven to unravel his best friend’s disappearance, Michael Eldridge is on the verge of a discovery that will enable him to finally solve the mystery; time travel. He has worked out the equation, and is testing his theory, ready to leap into the past to find the missing link.

While in the process of ensuring a safe and successful trip, Michael’s life explodes around him. A competing company will stop at nothing to get their hands on his technology, and his father’s health is deteriorating rapidly. When the woman of his dreams suddenly announces she’s interested in a relationship, he realizes this could be the worst timing ever; things are coming to a head faster than he can cope with them.

Will he find the truth, get the girl, and save his father, or will he be swept away on An Altered Course….

What listeners say about An Altered Course

I loved this book - but at moment do not have the time to go into a more in-depth review but just wanted to let you all know this book is one for you if you love time travel, sci-fi and mysteries.

I will be back and be looking at authors other works if there are any, not checked yet.

The narrator was perfect for the story.

It's a Wonderful Life.

What a strange book, much more like a graphic comic book whose author can't draw pictures than a text novel. It is quite fun with a good storyline in the background, but...
Thirty years before, in 1957, three seven years old boys, close friends, after school go to explore a new drainage system still under construction; but when one of them, Joe, runs off to get flashlights so they can explore the tunnel, the other two don't wait for him to come back. They go home. Joe is never seen again. One of the boys who abandoned him grows up crippled by guilt and the need to know what happened that day and devotes the next thirty years to developing a means to bend time so he can go back to find out. In his researching, Michael becomes a celebrated software designer, famous world wide and owner of a large computing business in Silicon Valley, contracted by NASA. Billy, the third member of the original group of three schoolboys, is his partner.

The story is developed in little story blocks - Mike's relationship with his father, a whirlwind romance, etc, and filled with his angst and introspection over his lost friend, his own aloneness, the possibilities of time travel (how the past affects the future) and, when she's around, his lusting after one of his employees of six years who suddenly sets out to seduce him, having apparently had a crush on him since she was a child. There is a lot of techie information, computer code, an AI, some killings and all sorts of nefarious business, combined with the ongoing obsession to return to the place where he had last seen Joe, to once again find (his only?) friend. Ho hum.

Yes, it would make for an exciting comic book.
And, to be honest, it is quite an exciting book once the initial hour or so has passed, so stick with it. But with such two dimensional characters, it does require an enormous suspension of disbelief. Fortunately, John C Snipes is there to breath some life into them. His fairly deep voice reads at a brisk rate with good intonation and all of his protagonists, male and female, are given distinctive and individual voices, even if an English agent does have an accent which alternates between a Bond character and Michael Caine. His overall performance is good. The production quality not so much, with sound levels varying, just slightly but sufficient to be subtly intrusive. However, it was Mr.Snipes performance which carried this reader to the end.

I was fortunate in being freely gifted a complimentary copy of An Altered Course, at my request, by the rights owner, via Audiobook Boom. Thank you. It was an intriguing premise and a somewhat bizarre experience. As previously mentioned, it would make an excellent graphic novel series, or even a film (there is plenty of action of one sort or another). But as a book I found it lacking in substance. Or have I missed the point - was it supposed to be funny?

Travel through Space and Time

An interesting and fun adventure with a good story and characters you care about.

With a good Narrator transport yourself through the Space-Time Continuum and enjoy the magic of a good
Audio Book.

Light on time travel but a good adventure

This was an adventure story with somewhat light time travel elements. I still rather enjoyed the book and felt it had plenty going on to keep the story moving. The narration is pretty good and kept me engaged in the story throughout.

The book has an interesting premise, time travel and alternate realities, I was always fascinated by the idea. A bit slow at the beginning but as the layers start to fall away, it gets really interesting, the ending is a happy one. It could have done without the one x-rated scene, seemed out of place and not very convincing. The GF was annoying as hell, but love is love I guess :)
Overall enjoyed listening to Mr. Snipes voices, animated and varied. A few places the transition from one scene to another the pause was noticeable and the voice changed, but that is minor.

I was given this free review copy audiobook at my request and this review is voluntary.

I loved this book. It was provided to me as a free copy but I was not Obligated to leave a review.

Main character is an engineer in California. Just a normal guy nothing crazy and that’s what makes his story endearing.

I enjoyed listening to this book. The narration was sound and kept the story flowing along. I do have to say that some of the foreign accents seemed forced. They weren't bad, just forced.
I did request this book in exchange for my review.
The storlines, at times seemed a little simplistic, especially the naivety of some of the characters when travelling abroad, considering how well known the main character is.
These are the reasons for my rating.

Time travel takes a back seat to adventure

This is an interesting story that does very little in time travel. It takes place mostly in a present time with some flashbacks for back story that helps with why we are here.

There is one trip taken with a specific purpose and another that is eventually discovered but that is all in time travel.

The story grabbed my attention and held it throughout. There is some X rated stuff but it is reasonably brief although it is spread throughout the story.

Overall I thought this was a good story and worth the read once I got used to the reader. I found the voice a bit odd but he did the characters fairly well.
Time travel takes a back seat to adventure/intrigue in this one.

I loved it. It was a fun read.

Time travel is one of my favourite genres. I did enjoy this story and it had a lot of promise, but I felt like I wanted more when it came to the characters getting out of trouble. I also wanted more time travel. In a sense, it was too easy and I wanted more "trickery" to a certain extent. The characters were well developed and I tended to care about their well being. I enjoyed the wit and back stories of the main characters as well. The story flowed well and I was able to get into a good listening routine but I just wanted more problems or urgency for the main characters. The majority of this story is about the creation and harnessing of time travel rather than time travel itself. Be warned there are some mature scenes in this one and some language sprinkled throughout but did not include nothing I minded. The performance was great. There was clear distinction between character's voices and the tone used really added to the story. ** I received a copy of this audiobook in exchange for an honest review from Audiobook Boom. This in no way affected my opinion of this work. **

Michael Eldrige is a renowned scientist with an obsession with time-travel. One of his main goals in life is traveling to the past, when at 7 years old, his friend Joe disappeared.

The premises of this story were interesting, and the intrigue wanting to know what happened to Joe kept me interested until the end, but there were many moments in the book that made me roll my eyes. The characters are simple drafts without personality, and the secondary characters blend into each other. There is just one female character, which is both secretary and lover to Michael. The only things she does are being insatiable in bed, being a good cook, worry about Michael, and complaining about the risk of the experiment. I hate when writers nowadays create uninteresting female characters, c&rsquo;mon, life has changed a lot since the &rsquo;50s. There is also a sudden friendship born from a Deux ex Machina event that was not believable at all. The story in itself was okay, and there were plenty of twists and turns that got me entertained, but many of the events and character&rsquo;s reactions and dialogs were unrealistic. There was also a lot of information delivered as monologues by Michael, which didn&rsquo;t seem the most elegant way of doing this. I think I also have troubles when main characters are stinking rich, smart, and successful, to the point that they don&rsquo;t seem to be real people anymore.

John C. Snipes did a good job in differentiating characters with voices and styles, but I had issues with his reading rhythm, introducing some pauses where they should not have been any. The audio production could have been better too. There were noticeable audio edits, changes in volume, audible breathing, and mouth noises. I found those distracting, even though I got used to them after a while.

It was an okay book, interesting if you are into time travel and are not too demanding about plot twists and character development.