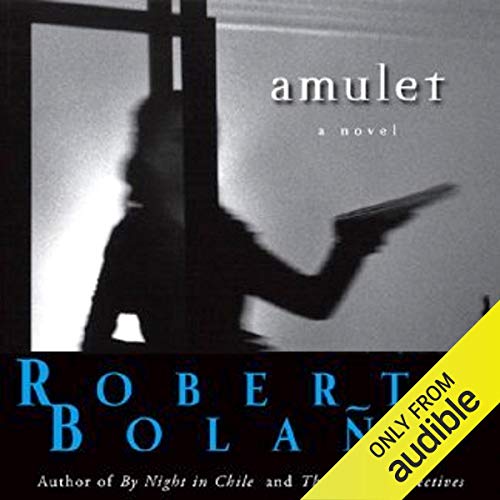 A tour de force, Amulet is a highly charged first-person, semi-hallucinatory novel that embodies in one woman's voice the melancholy and violent recent history of Latin America.

Amulet is a monologue, like Bolaño's acclaimed debut in English, By Night in Chile. The speaker is Auxilio Lacouture, a Uruguayan woman who moved to Mexico in the 1960s, becoming the "Mother of Mexican Poetry", hanging out with the young poets in the cafés and bars of the University. She's tall, thin, and blonde, and her favorite young poet in the 1970s is none other than Arturo Belano (Bolaño's fictional stand-in throughout his books). As well as her young poets, Auxilio recalls three remarkable women: the melancholic young philosopher Elena; the exiled Catalan painter Remedios Varo; and Lilian Serpas, a poet who once slept with Che Guevara. And in the course of her imaginary visit to the house of Remedios Varo, Auxilio sees an uncanny landscape, a kind of chasm. This chasm reappears in a vision at the end of the book: An army of children is marching toward it, singing as they go. The children are the idealistic young Latin Americans who came to maturity in the '70s, and the last words of the novel are: "And that song is our amulet."

What listeners say about Amulet

Would you listen to Amulet again? Why?

I really enjoyed the narrator's reading. She was very believable and authentic. It was especially interesting to hear Bolano write in the voice of a female in that world he had created in The Savage Detectives. And to hear her opine on those men, boys really, including Arturo Belano, the Bolano figure who is really only a teen here.

Would you recommend Amulet to your friends? Why or why not?

Only for Bolano fans who have already read and enjoyed The Savage Detectives - and if they have enjoyed it, then Amulet is really a must.

She was very authentic. Really seemed to have a vivid picture of the characters she was talking about and how she felt about them. Also how she felt about her own character - Auxilio and the uncertain place she inhabited in that world even as she is "the mother of Mexican poetry." That humility and awe for the poets is touching.

The scene in which she meets Lilian Serpas's young son Carlos seems to haunt her with unspoken maybe not even fully understood feelings. I really want to go and consult the written text to get a better read between the lines here.

I was a little worried, after I was disappointed in Antwerp, that these smaller Bolano publications would all prove disappointing, but Amulet reassured me that while they all may not be hits, it's worth weeding through to experience the winners.

I enjoyed this. The tale of a woman wbo touches upon many lives and left an impression on me.