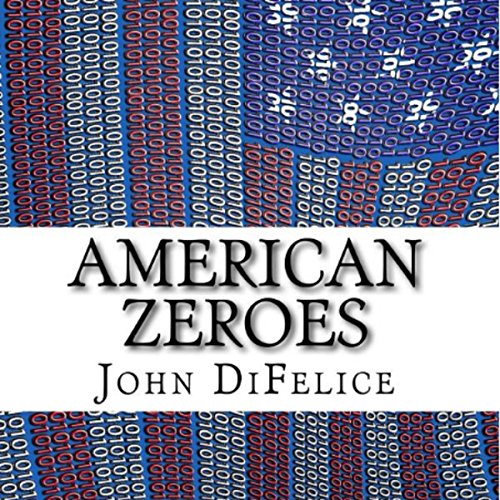 Jeremiah Stumpf is certain of two things: he loves his country, and his next door neighbors are terrorists. Between counting and recounting his cache of gold and silver coins, cleaning his assault weapons, and emailing Paul Ronsen, his Libertarian superhero, Jeremiah devises a plan to deal with his neighbors in a way that is uniquely American. Unfortunately, his neighbors are not what he thinks they are. They are something much worse, something beyond his comprehension.

This book pulled me back in

American Zeroes. First and foremost allow me to set up my listening environment. It was November 9th 2016, the day after... Being though I was about to swear off a lifetime of interest America's politics as well as worldwide political issues for the next 4 years.
This is the book that pulled me back in.

The character's thoughts and actions shared a creative microcosm of truth about us all. We may not speak outside of our immediate circles of our political or even religious vaults. We may make comments even prejudge. I say we, because we are not Jeremiah Stumpf. This character has the type of crazy honesty that oddly is relatable. I know this guys. Sadly, I know this guys. I've seen him on social media, seen him walking through Walmart, I've seen this guy on the news. This guy is an American fixture. Be it good or bad it make us America. I would love to see this played out as As far the performance of the audiobook, I salute you, Joe Quirk. You gave a cool performance, of John DiFelice's words. I'm going to most definitely give it a few more listens. I look forward to future titles from John Difelice.

A man with just enjoy knowledge to be dangerous

American Zeroes is a fun, amusing satire full of the sort of people you would hate to be stuck in a room with. These are not likable people - you have been warned.

The main character, Jeremiah Stumpf, is 100% sure that the way he sees the world is completely right, he is never at fault, and that everyone loves him. He's an over the top version of the worst stereotypes of post-9/11 Americans you can imagine - arrogant, jingoistic, xenophobic and sure that USA can do no wrong. Oh, and all Arab looking people must be terrorists. He's a smart guy, clearly reads a lot and quotes stuff, but he just has no wisdom to go with that knowledge, and no ability to see outside his very tiny, tunnel vision view of things.
Many of the side characters - mostly Stumpf's friends - are not much better.

John DiFelice write well, giving us both characters that are easy to dislike, but also in a way that allows for the reader to want to keep going. He put's his character into positions (accidental drug stupors, for one) that provide strange but entertaining outcomes. The satire is good, and the story never gets bogged down.

It is over the top, and in some ways using extreme stereotypes, but despite that is still seems (from an outsiders POV) to be a reasonably accurate description of the worst of the post-9/11 state of America.

Narration by Joe quirk is top-notch. Different voices (and accents) for characters. Inflection and timing is great. Easy to follow along are enjoyable to listen to. I look forward to more of his stuff.

Would you listen to American Zeroes again? Why?

I would, because it was entertaining and I enjoyed it.

What does Joe Quirk bring to the story that you wouldn’t experience if you just read the book?

The performance was excellent, and the different accents were very well done. The one thing about the performance that I'd say wasn't perfect was the speed of it. The delivery seemed slower and more drawn out than most others. I would suggest starting this book at at least 1.5 or 2 times the normal speed.

It definitely made me laugh. It's certainly unsettling and makes you think, but there's nothing to make anyone cry.

Just about everyone knows someone like the main character, who is a paranoid, over-the-top, right-wing conspiracy theorist. It's a little unsettling to be inside the head of someone like this, but the books still manages to be hilarious.

A very good satire of America. Good job by the narrator.
A book that makes you both laugh and think.

Definitely an interesting but weird read.

At times I felt that the author overdone it with the protagonist, with his extreme views and all that. But going forward, I realized that he was spot on.

John DiFelice is a brilliant writer. At first, I really thought that he was a far right Republican, bashing our current administration, but then I understand the satire in "American Zeroes" with his main character going on a drug trip and getting ready for a fictional doomsday. There is a lot of Ayn rand's reference, which I don't standby at all, but understand the concept for this book.

DiFelice combines pop cultures, terrorism, and his view of the United States is very humorous at times. "American Zeroes" is not a punch in your face political propaganda, but it is more like a time capsule of what has been going on since 9/11. Very well written and extremely clever. Instead of thumping us on the head with political rhetoric, John wrote his views on what is going on in our society by writing a fictional story.

What was one of the most memorable moments of American Zeroes?

Too many to count. There were a lot of interesting plot twists that showcase the author's writing skills but there is still so much to clear up that we will never know. I guess that is the beauty of the zero.

This story is the epitome of the new "alt-right", fascist movement going on in the United States after the election of Donald Trump. It's scary to see how ill informed and uneducated in the ways of the world and surrounds of the protagonist is a stereotypical loser (or zero, get it!) that deserves a deeper look and, maybe, even a second listen. His thoughts and actions are being echoed daily after the election so things have become a little too real for me to thoroughly enjoy this book.

Full disclosure: I was given a free copy of this book in return for an honest review.

I tried listening to this book, and I couldn't get into it. A few weeks later, I gave it another go. I hated the story until about the last third or so, then things started to click into place and by the end I liked it.

The protagonist is very annoying -- but that's the point. The protagonist, who is also the narrator, is highly unreliable and rather full of himself.

What made the book hard for me to listen to at first was it sounded whiney from the start, and the recording sounded...tinny? There is a sort of quiet static in the background and it sounds...tinny.

Anyway, if you like unreliable narrators, satire, and acid trips, you should check out this book.

Satire of a Paranoid Libertarian

The main character has no growth or change in his journey. I know it is satire but he is such a unlikable character that it was hard to sit threw. I would change Jeremiah in the end and at least give him some personal growth to see that he needs to change. But the Satire has a strong bias in it against many of the libertarian values.

What could John DiFelice have done to make this a more enjoyable book for you?

The book jumped around and did not follow a good linear plot due to the drug use and for me that was just really annoying. The plot devices just were not great His dislike of the values of the Right-wing were really over the top in the satire.

Have you listened to any of Joe Quirk’s other performances before? How does this one compare?

No I have not It was his performance that got me to finish this audio book.

Could you see American Zeroes being made into a movie or a TV series? Who should the stars be?

This thing would never be made into a TV show or movie not even on the SyFy channel.

"This review copy audiobook was provided by the author/narrator/publisher free of charge via Audiobook Boom."

If you could sum up American Zeroes in three words, what would they be?

not much actually, it's technically sound and definitely disturbing. These weirdos are really out there. A bunch of twisted Holden Caulfields of the alt-right.

What does Joe Quirk bring to the story that you wouldn’t experience if you just read the book?

The narrator was pretty good.

If you could take any character from American Zeroes out to dinner, who would it be and why?

Ben Franklin or the quadraplegic father of one of the characters. why? the other characters are mostly reprehensible human beings

I'm from the area where this takes place so that made it more creepy for me. I'm glad it was (relatively) short. Not a knock on the writer, he did a wonderful job crafting the novel but the subject matter is, for me, disturbing. Personally I've decided to opt out of the what's going on in this country for at least the next 4 years. I'm getting armed and laying low anticipating fools like the protagonist to come out of the woodwork now that they are feeling empowered. Hopefully something will be left when I re-emerge.