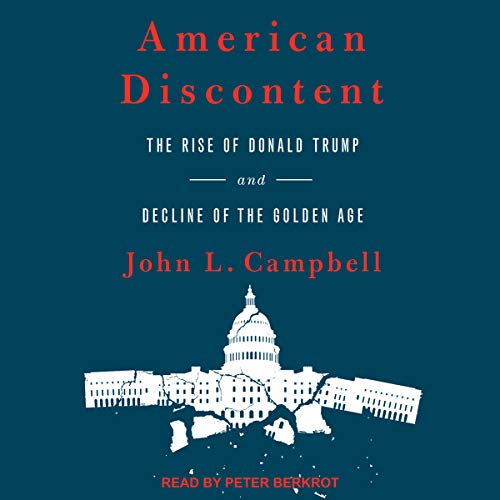 The Rise of Donald Trump and Decline of the Golden Age
By: John L. Campbell
Narrated by: Peter Berkrot
Length: 8 hrs and 5 mins
Categories: History, 21st Century
5 out of 5 stars 5.0 (1 rating)

The 2016 presidential election was unlike any other in recent memory, and Donald Trump was an entirely different kind of candidate than voters were used to seeing. He was the first true outsider to win the White House in over a century and the wealthiest populist in American history. Democrats and Republicans alike were left scratching their heads - how did this happen?

In American Discontent, John L. Campbell contextualizes Donald Trump's success by focusing on the long-developing economic, racial, ideological, and political shifts that enabled Trump to win the White House. Campbell argues that Trump's rise to power was the culmination of a half-century of deep, slow-moving change in America, beginning with the decline of the Golden Age of prosperity that followed the Second World War. The worsening economic anxieties of many Americans reached a tipping point when the 2008 financial crisis and Barack Obama's election, as the first African American president, finally precipitated the worst political gridlock in generations. Americans were fed up and Trump rode a wave of discontent all the way to the White House.

Master of the obvious, uses many words

Campbell spends a lot of time telling us what is already well known- but most irritatingly, without any new insight of understanding. That is despite his oft repeated Red Thread that was to bring it all together. It did not.
While the story was vapid, it was the narration I found so deeply irritating. The smarmy , mocking intonation and the obvious mispronunciation of too many words.
I'd ask for my money back but Audible seems to have change d their policy of late, making it more difficult.