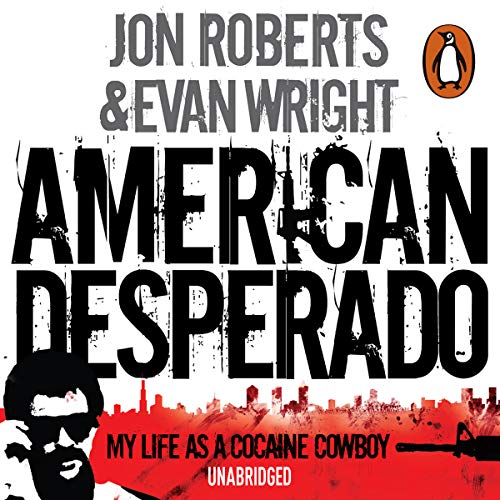 American Desperado is possibly the most jaw-dropping, event-filled, adrenaline-soaked criminal autobiography ever written. Like a real-life Scarface Jon was born into the upper levels of the Gambino crime family and witnessed his first murder at age seven. He became a one-man juvenile crime wave before joining an assassination squad in Vietnam. He returned to New York at age 20 to become one of the city's top nightclub promoters, then journeyed to Miami where he became the de facto transportation chief of the Medellin Cartel, and along with a tech-wizard partner, created some of the most sophisticated smuggling technologies ever. With a hulking 6'6" bodyguard always at his side, and a rural fortress protected by mortars, tear-gas cannons, and a gold-fanged attack dog, Roberts was brutally effective at what he did. To law enforcement, he was known as the "Bearded Gringo," a spectre they could never touch. To United States senators and CIA officials, he was "the guy who can get things done". He eventually formed a clandestine alliance with the US government and in the end found personal late-life redemption.

What listeners say about American Desperado

Was a great story which I thoroughly enjoyed listening to.

Was broadly three parts, growing up the son of someone high up in the Mafia, being a soldier in Vietnam and finally his life as a smuggler.

All were told from a different angle which made the story more interesting, for example the war veteran was not from the "look at me I'm such a macho hero", but actually told of how the U.S. Government depended on people like him who would do "dark" things to the enemy, even though as he puts it they went too far on a number of occasions.

I was captivated after the first line!

I would definitely recommend this audiobook to a friend. It was incredibly fast paced and extremely interesting. Jon Roberts was also very fun and this comes out quite a lot throughout the book.

What was one of the most memorable moments of American Desperado?

When Jon was serving as a soldier in Vietnam.

They help make the book more three dimensional. I've never listened to an audiobook with so many narrators before and it really worked well. It helped define the different characters when at points, it would have been quite easy to get them mixed up. It also made it seem like each different character was expressing their own view point on the story.

If you're looking for your next 'fix', this is definitely it. I was thoroughly gutted when it finished.

What was one of the most memorable moments of American Desperado?

Vietnam tour........ really? Airborne advanced recon death squads? I could imagine the SOC or Green berets doing it, but not joe blogs recon infantry. Hard to believe without the press who combed the countryside for stories like this during the campaign! I'm sure the VC would of loved to take a reporter to a mutilated VC or civilian body.

No it is long but interesting all the way through! `

I have a feeling of an inflated opinion of himself or more of his emotions, all the way through the book..... but with the other opinions of friends and family throughout, put a sometimes contradicting view of events into to the memory's of emotions and events. Which shows to never show weakness when dealing with cartels and hitmen, but also playing the crowd!

This is a great book, can't recommend it highly enough, at 16 hours and 40 minutes it wasn't long enough for me and I was gutted it finished. I have watched the documentary "cocaine cowboys" that features this books main subject Jon Roberts as well as others mentioned in the book, so I knew a little of the story but this just showed me what an amazing life this guy led. Dark and violent in parts it also has a large amount of dark humour which made me laugh out loud, A number of narrators are used to read the book all of which were easy to listen to and brought the different characters to life especially the main narrator who as Jon Roberts was excellent.This is by far one of the best books in its genre that audible stock. Haven't really got a bad word to say about this title. Give it a try you won't be disappointed.

Sometimes truth is more interesting than fiction, like a car crash, compelling fascinating, sometimes terrifying. Told in a an undramatic way, it smacks of truth, he's not trying to impress you, he probably doesn't care what you think of him. He doesn't pretend to be a nice guy, he led an incredible life.

Very interesting from start to finish.

Yeah very much enjoyed this book. the details of the author were splendid and I felt like I was there.

Fascinating all the way through

Was pleasantly surprised with this book.
Had not heard of it before and took a chance buying it but couldn't put it down. Highly recommend!!

This book does no gloss up crime as some good old criminal who's misunderstood and really a good bloke at heart. A true life and sometimes shocking story of what it must be like being a real gangster not a movie gangster

Very well presented, with multiple actors voicing the protagonist and other supporting players. The format is mostly in the first person as a memoir, with the occasional authors note and press 'clippings' interspersed.

Where does American Desperado rank among all the audiobooks you’ve listened to so far?

I was just in amazement at how it all worked

Incredible story, Incredible life. really good listen, I loved it. this story is no holds bar account of a serious bad boy!!