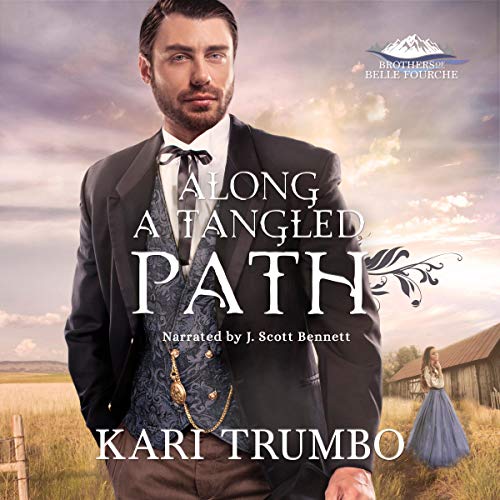 Along a Tangled Path

Along a Tangled Path

Charles Oleson is known for defending women, but this will test his limits.

It's fall roundup at the Broken Circle O, and a new crop of hands sign on for the job. When Charles is assigned a small, mute man to watch over, he despises the injustice. That is, until he realizes there's more to Will Galliger than meets the eye.

Wilhelmina "Will" Galliger will do whatever it takes to earn her own plot of land, including acting like a man. Will has pretended to be mute for three years as she's worked all over the West, just trying to earn enough money to buy her own spread. As a woman who had been treated as chattel, she works doggedly for independence.

Taking up a job on a ranch with different rules than she's used to lands her under speculation and risk of discovery. Charles and Will fight against an attraction that seems wrong until Will's secret comes to light.

Can she still have her dream of her own ranch and the man she's grown to love, or will he be unable to see past the shadow of her pretend life?

Scroll up and order this tension-filled sweet romance by best-selling Christian author Kari Trumbo. This is book six in the highly successful Brothers of Belle Fourche series.

Another great story by Kari Trumbo

I love listening to the Brothers of Belle Fourche books, and can't wait for the last book to come out as an audiobook.
Along A Tangled Path is another great story in the series weitten by Kari Trumbo and narrated by J. Scott Bennett.

Along a Tangled path is a sweet historical romance in the Brothers of Belle Fourche series by Kari Trumbo. Having listened to the other books in the collection I was anxious for this latest one and was not disappointed. The author has captured well the era of the setting (1900, South Dakota) and the emotions and actions of her characters. They are realistic and relatable and I was drawn quickly into their story and enjoyed watching the romance between Charles and Wilhelmina develop. Wilhelmina, a determined young woman, is working toward buying her own land and has quite the secret. Charles, the Broken Circle O Ranch owner's nephew has been assigned to watch over the new 'guy' but he begins to think there is something more than meets the eye with him. Will her determination to not allow a man dominate her and her desire for land keep them apart? There are a few surprises in the story which keep the reader's interest high and the author does a nice job wrapping up the romance. I wish it had been a little bit longer story to allow for more details at the end but perhaps there is another book ahead. I can only hope. Although sixth in the series, it is easily a stand-alone story but I'd recommend reading the other books in the series as well. Readers of historical romance books will not want to miss this one. I listened to a complimentary copy of the audiobook and was not required to write a review and the opinions are my own. The narrator, J. Scott Bennett, did a great job telling Charles and Will's story, which made for an enjoyable listening experience.

Great way to end the series!

One tough lady who thinks that the only way to get what she wants is to act and look like a man, one tougher man who thinks that he needs to teach the new "ranch hand" just how to do "his" job comes to blows. Both must learn that truth and secrets must be revealed in order to look to the future.

This was my favorite of all of the Brothers of Belle Fourche books! So glad I got this book!

Kari Tumbo did a great job with this series and each book can be read as a stand-alone, but they are better if read as a series. J. Scott Bennett's southern whiskey smooth accent makes this whole series come to life!

A delightful story of the lengths one will go to, for justice and survival. Will signs on as a mute farm hand, her goal has been for three years to save money for her own land. Until Charlie, and attraction along with misunderstanding come about. The authors book are always rich in detail, setting things that are unjust, and Christian based. Given arc audio also which greatly added to this delightful story.

I am really loving this series of cowboy stories. They are just the kind one can sit down with at the end of a hard day and relax and enjoy.
This one is a sweet story and throughout I keep wondering whether Will's secret would be discovered. She is a headstrong and capable young lady and I loved this strength in her even though she was living the strangest of lives.
Charles is a caring and responsible young man who has been assigned to make sure she stays out of harms way and to teach her the way the ranch is run.
Lovely characters written into a beautiful love story by Kari Trumbo and very capably narrated by J. Scott Bennett. I could listen to him all day.
I requested and listened to the audiobook version which I thoroughly enjoyed.
My voluntary and unbiased review is given freely above.

Along a Tangled Path is a fantastic addition to the Brothers of Belle Fourche series. This book is sweet and clean with a delightful and original storyline. The characters are charming and realistic and Mr. Bennett performs a wonderful narration.

This was a nice love story between a woman who claimed to be mute to be able to earn enough money for her own ranch/land. Read or listen to hear how she falls in love with Charles and how he loves her. Interesting story line. Wish there was more to the story.