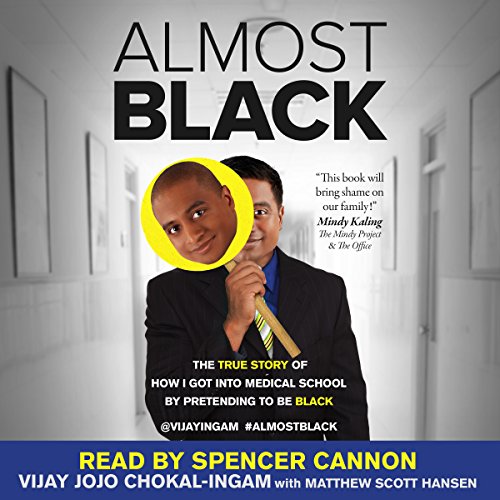 I got into medical school by saying I was black. I lied. Honestly, I am about as black as my sister Mindy Kaling.

Once upon a time, I was an ethically challenged, hard-partying Indian-American frat boy enjoying my third year of college. That is until I realized I didn't have the grades or test scores to get into medical school. Legitimately.

Still, I was determined to be a doctor and discovered that affirmative action provided a loophole that might help. The only problem? I wasn't a minority. So I became one. I shaved my head, trimmed my long Indian eyelashes, and applied as an African American. Not even my own frat brothers recognized me. I joined the Organization of Black Students and used my middle name, Jojo.

Not everything went as planned. During a med school interview, an African American doctor angrily confronted me for not being black. Cops harassed me. Store clerks accused me of shoplifting. Women were either scared of me or found my bald black dude look sexually mesmerizing. What started as a scam to get into med school turned into a twisted social experiment, teaching me lessons I would never have learned in the classroom.

"Mindy Kaling's brother is a cool prankster upsetting the status quo." (Gawker)
"This sounds like it's straight out of a sitcom!" (Perez Hilton)
"Vijay Chokal-Ingam, the brother of writer and actress Mindy Kaling, has sparked controversy with his new book." (NBC News)

What listeners say about Almost Black

I found this book so offensive, I couldn’t finish reading it. Page after page, the author uses vulgarity to express much of what he’s experiencing.
I’m no prude, I wish the author would have found a better way to tell his story.

I found the premise interesting and read the book out of curiosity. Very audacious of the author to write about his illegal scam! He is a very dislikeable character for sure. Sad state of affairs where different metrics are used for admission depending on race. This is no news, but it is interesting to read the author’s experience. I listened at 1.5 speed but wish I had not paid for this book.