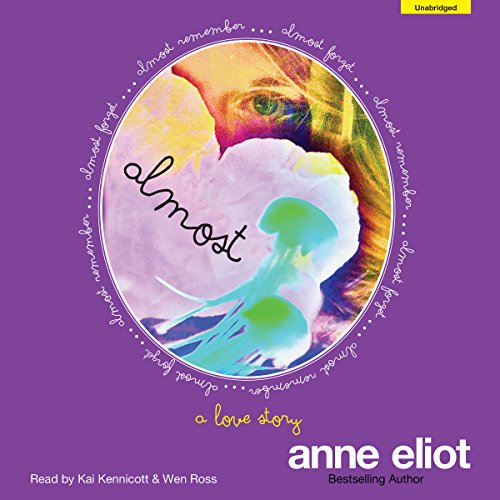 At a freshman party she doesn't remember, Jess Jordan was almost raped.

Unfortunately, until Jess proves she's back to normal activities, her parents won't discuss college. So she lands a summer internship and strikes a deal with hockey jock Gray Porter: He gets $8,000. She gets a fake boyfriend and a social life.

Jess has no idea Gray signed on for reasons other than money. She also never expects to fall in love. But Gray's beyond hot, holds her hand all the time, and makes her forget that he's simply doing his job. It's like having a real boyfriend

...Almost. Very nearly. Not quite.

Gray Porter is hiding secrets of his own. About Jess Jordan. About why he's driven to protect her, why he won't cash her checks or deny her anything she asks.

What listeners say about Almost

Good portrayal of a great story

This was one of my first ever YA reads in 2013 and I thoroughly enjoyed listening to it three years later. Firstly, as an audio interpretation I can only say how excellent it was. It was a dual POV narration but it pushed the boundaries further with the male and female narrators speaking the appropriate parts of dialogue in the alternate POV. This enhanced the listening experience massively.

As the title suggests, this tale centres around the years of fallout after an almost rape. This could sound morose and certainly the half life existence Jess is living is a grim at times. However, this is a story of hope, restoration and first love. It's quite beautiful. Grey is a young man with integrity. I admired and half fell in love with him. He was was so intertwined with Jess' life, it was a mess of lies but they navigate the lies to find a truth in their friendship. Whilst the subject matter was serious and had the potential to be excessively heavy, Anne Eliot finds a way to translate a grave message that hits home yet still delivers a great YA story that satisfies and fulfils the reader.

The narration hit the spot in terms of the characters ages, they fit the age range well in terms of voice, emotion etc.

If you've not read this book, I highly recommend as a perfect YA, coming of age love story with a punch.

This is a difficult topic to read about.

1st, this book deals with a very difficult subject and is perhaps, the darkest YA book I've ever read. Be prepared!

2nd, the narrators work wonderfully together and do a great job bringing the story to life.

3rd, the writing is powerful and intense. It's not easy to bring nightmares to life and still fit in a love angle.

Great job all around.

This was September's Boho book club read. It was also recommended to me by Lenore from Celebrity Readers, so it was already in my radar. And the author also gifted it to me (and everyone else in the book club) in exchange for an honest review. Oh, and I also bought the audio version after being gifted the ebook because of the discount. So I was totally ready to get into this book.

As someone who has been the victim of sexual abuse, I was both intrigued and worried about what I should expect in this book. I am pleased to report that I found the way it was handled in a way in which I could relate. All too often I read books with raped used as a device to weaken the female lead and turn it into some ridiculous bull shit. That's not what I found in this, and I was relieved. Survivors get enough crap and we need strong stories.

Another super mega very important epic thing to mention... this is absolutely a nerdy romance. I love those so many! And the amount of references was glorious. Although it is important to note that the romance in here is very unconventional. I don't agree with the way everything happened, but I think I'm okay with it.

I have fallen so hard for Anne Eliot's writing, and I plan on reading more of her stuff - and soon. Also I recommend you all do the same. Even if Lenore recommended her stuff and she quite obviously enjoys my suffering from all the feels involved in such things.

Where does Almost rank among all the audiobooks you’ve listened to so far?

It's in the top ten.

I liked that the author was not afraid to tackle a very sensitive topic, and did so with empathy.

Kai and Wen bring the story to life, they add emphasis without overdoing it.

I liked the story, it was a difficult trip at times, but love won out in the end.

everything I didn't expect from a teen novel

the voice acting grew on me as the book went on. the story itself was just GREAT. I loved the way that the author not only surprised me with the strength of her characters but also with the climax of the story.
a good read for sure.

The plot for this book was okay, but what really got me was the narrators! All the other audiobooks I have listened to, the narrators never switched off. If there was a line with the male voice, the female couldn't just make her voice go "manly". Rather the male narrator had to put his voice in. The switch off in this book just drove me nuts. Also, they talked really slow and in all honesty, this book got the low reviews because of the narrators. They didn't make the story alive in my opinion. I really wanted to just mark this book as finished, but the person in me kept listening to this book until it was done. Torture for me to be honest.

I really enjoyed this book it just sucked me in and I couldn't stop listening. I felt like I was actually there during her flashback dreams. I fell In love with Borg characters. The narration was slightly annoying at first especially hearing "she laughed" and then after that having a real laughing sound but after I got used to it, it didn't bother me anymore.