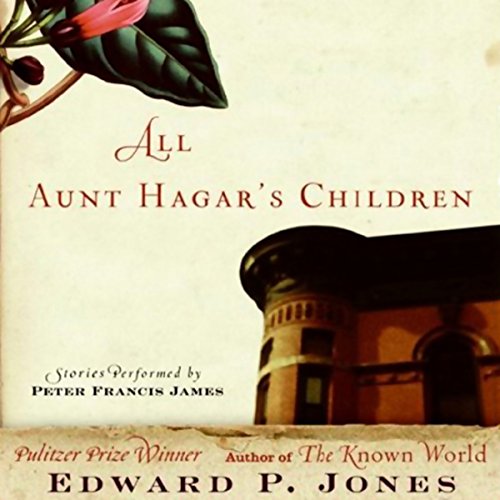 In 14 sweeping and sublime stories, five of which have been published in The New Yorker, the best-selling and Pulitzer Prize-winning author of The Known World shows that his grasp of the human condition is firmer than ever.

Returning to the city that inspired his first prize-winning book, Lost in the City, Jones has filled this new collection with people who call Washington, D.C., home. Yet it is not the city's power brokers that most concern him but rather its ordinary citizens. All Aunt Hagar's Children turns an unflinching eye to the men, women, and children caught between the old ways of the South and the temptations that await them further north, people who in Jones' masterful hands, emerge as fully human and morally complex, whether they are country folk used to getting up with the chickens or people with centuries of education behind them.

In the title story, in which Jones employs the first-person rhythms of a classic detective story, a Korean War veteran investigates the death of a family friend whose sorry destiny seems inextricable from his mother's own violent Southern childhood. In "In the Blink of God's Eye" and "Tapestry", newly married couples leave behind the familiarity of rural life to pursue lives of urban promise, only to be challenged and disappointed.

With the legacy of slavery just a stone's throw away and the future uncertain, Jones' cornucopia of characters will haunt readers for years to come.

"Jones' stories are rich in detail and emotions." (Booklist)
"A complex, sometimes somber collection....Each of its denizens comes through with his own particular ways and means for survival, often dependent on chance, and rendered with unsentimental sympathy and force." (Publishers Weekly)

What listeners say about All Aunt Hagar's Children

I JUST DON'T KNOW ABOUT THIS!

Began listening to this and realized that "Lost in the City" comes first. So I switched. Loved the narrator. Enjoyed the first few hours. And I reviewed "The Known World" and thought it was wonderful. These books are all extremely well written and well read. "Lost in the City" has left me too stunned and far down to come back to this one. I need to bail to something more uplifting.

The voice of the narrator is enchanting and the stories are small worlds unto themselves. Listening to this book while attempting to do other things is dangerous because it so completely engages one's imagination. This is Jones's follow up to his earlier collection of stories called Lost in the City, and it provides both past and future to some of the earlier characters. But you don't need to have read Lost in the City to fully enjoy this book. Jones does for Washington, D.C. what Faulkner did for Yoknapatawpha.

Characters you love to hate

This book is not to be missed. Not only are Jones's characters unforgettable (even those with a dark side), the narrator is just fantastic. Read it today!

These short stories told of how people lived during the 30ies, through the fifties. some interesting some not.

Boring book, hard to follow plot, if there is one. I stopped in the middle.

It was very hard to know who was narrating, and the characters’ relationships weren’t clear at all. You’d need a book in front of you to keep referring back, which might help.