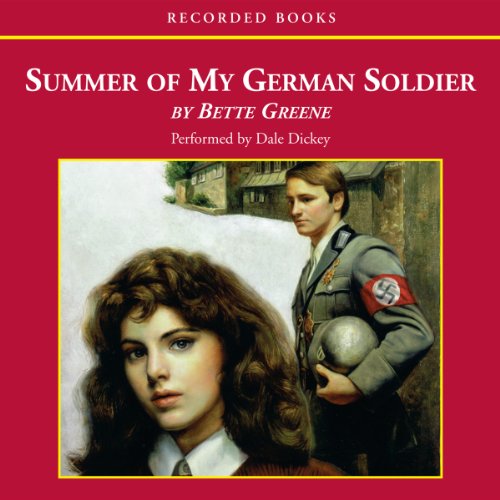 Summer of My German Soldier

Summer of My German Soldier

The summer that Patty Bergen turns twelve is a summer that will haunt her forever. When her small hometown in Arkansas becomes the site of a camp housing German prisoners during World War II, Patty learns what it means to open her heart. Even though she’s Jewish, she begins to see a prison escapee, Anton, not as a Nazi, but as a lonely, frightened young man. As their gentle friendship blossoms, Patty experiences a kind of love she never felt from her abusive father or her distant mother.

Soon Patty must weigh the cost of harboring a Nazi prisoner - the possibility of losing family, friends, and even her freedom - against the beauty of this dangerous but unforgettable friendship.

Based on the author’s own painful experiences growing up in Arkansas during World War II, this poignant novel is an ALA Notable Book, a National Book Award finalist, one of the New York Times Outstanding Books of the Year, and the winner of the Golden Kite Award.

Not a fan of the reading. Great story though. But the reader frequently makes a very irritating clicking noise in her mouth as she's reading. I found this terribly distracting.

I first read this as a teen and I just love it.

The author makes you feel like you are the main character living her life. I loved it.