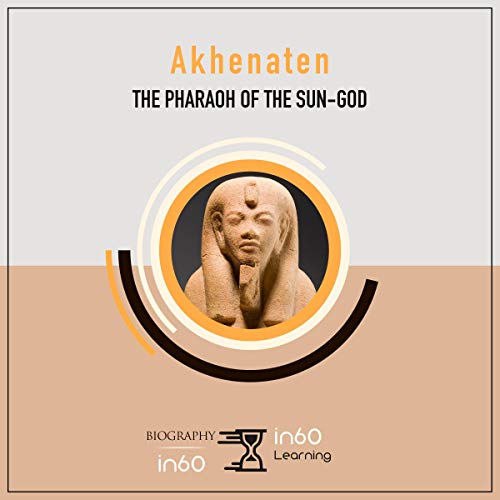 Akhenaten: The Pharaoh of the Sun-God

Get smarter in just 60 minutes with in60Learning. Concise and elegantly written nonfiction audiobooks help you learn the core subject matter in 20 percent of the time. Life is short, so explore a multitude of fascinating historical, biographical, scientific, political, and financial topics in only an hour each.

Akhenaten is one of ancient Egypt's most famous pharaohs both for fathering Tutankhaten and being the only pharaoh bold enough to discard thousands of years of religious history in favor of a new god, the Sun-Disk Aten. Akhenaten single-handedly altered Egypt more on its own than it would be changed until outside Greek influence took over. The impact his changes had on the religion of Egypt during and after his life cannot be understated, and the ways in which his predecessors worked to undo everything he had done is a remarkable act of revisionist history. The Sun-Disk Aten would live on and influence the world in surprising ways even after many believed it to have been purged from religious records.

What listeners say about Akhenaten: The Pharaoh of the Sun-God

Plenty to learn in one hour

This is the ninth book I’ve read/listened to by In60Learning and I would jump at the chance to listen to another.
Egypt, during the time of the pharaohs, has always fascinated me. Aside from what I learned in school, I did a lot of research prior to visiting the tombs in Egypt. Despite all of that, I still learned from this book. Thank you once again for providing an interesting listen.

This is the first book I’ve listened to by this narrator ( KS Redhawk ). She did an excellent job reading this content. I prefer to listen to my books at a higher speed and was able to do so without issues due to her clarity of speech.

A History of the Pharaoh Who Tried to Change Egypt

A brief history of the Pharaoh who moved the capital and changed Egypt's religion, only to have it all rolled back after his death. A bit of bonus content regarding Nefertiti and Tutankhamen because of their close relationships to Akhenaten.
Definitely worth a look if you have any interest in Egyptology ... or just to figure out what's going on in all those Mummy movies.

This is a snapshot of Akhenaten's time as pharaoh, the changes he made and how he influenced history. As usual, in60Learning is a great way to learn the highlights of history; be it people, places or events. In about an hour you get well researched information to enlighten your curiosity. If you haven't checked out in60Learning's books or audiobooks then you are missing a great way to brush up or add to your history education. The narration was well done. KS Redhawk has a pleasant voice and reads at a nice pace.

A brief history of a Pharoah

A short and concise insight into Akenatum the father of Tutenkarnun.
Very interesting.
I received a free copy of this audio book at my own request and voluntarily leave this review.