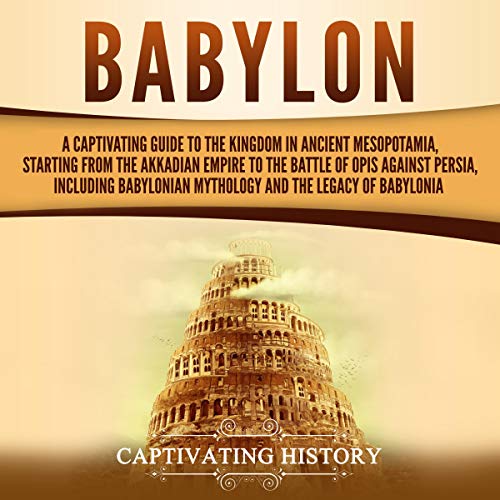 Babylon: A Captivating Guide to the Kingdom in Ancient Mesopotamia, Starting from the Akkadian Empire to the Battle of Opis Against Persia, Including Babylonian Mythology and the Legacy of Babylonia

Explore the captivating history of Babylon!

The Babylonian influence upon its successors and even modern society knows no bounds. One of the leading civilizations of Mesopotamia, the Babylonians provided the fundamentals of mathematics, agriculture, architecture, metallurgy, and other influential and necessary fields required to develop other great civilizations such as the Greeks, Romans, and even contemporary nations like China and the US. Without them, no neoteric world could exist.

In Babylon: A Captivating Guide to the Kingdom in Ancient Mesopotamia, Starting from the Akkadian Empire to the Battle of Opis Against Persia, Including Babylonian Mythology and the Legacy of Babylonia, you will discover topics such as:

So, if you want to learn more about Babylon, scroll up and click the "Buy Now" button!

What listeners say about Babylon: A Captivating Guide to the Kingdom in Ancient Mesopotamia, Starting from the Akkadian Empire to the Battle of Opis Against Persia, Including Babylonian Mythology and the Legacy of Babylonia

Well-written, absorbing history of the Sumerian cavitation, So much of what we got from Judaism, Greece, and Rome came from Sumer. The book added a lot to my understanding of development of modern civilization.

Excellently written, fascinating read. Can't speak for the validity of the text, but the writing has a way of drawing you in and making you see the way these ancient people must have lived. Sheds light on the earliest days of civilization. Definitely worth the read.

Good survey work that avoids the plodding detail of archeological pot shard dating for the most part. Makes for a good entry point into study of these fascinating cultures that reflect so many of our modern concerns in their detailed trade transactions and.

Too short, more like cliffnotes. I was very disappointed. I could get the same information from wikipedia. 6 minute chapters.

This book is an excellent resource for its subject for anyone looking to learn more about Mesopotamia and the great ebbing and flowing and rising and falling of the cultures who called it home.

it is definitely a history *story*, taking us from imaging Sadam Hussein pompously pretending to be a Babylonian to the first temple risen in Eridu, the author uses verbal imagery to paint the scene so that you feel like you are watching it all.

This has proven to be a fun read. The author takes us back to the dawning of civilization and provides many interesting insights into how the innovation of writing may have come about and what the first urban cities or towns may have been like,

The author uses major historical events to provide a kind of narrative tension, and between these he draws on many different sources to recreate detailed impressions of ancient daily life, including excerpts from the actual stories, myths, epic poems and letters preserved on steles and clay tablets.

Book was very interesting and easy to read for someone with an interest but not much knowledge of ancient Mesopotamia. There was a lot of hypothesizing about the nature of each civilization that could not easily be backed up with facts, but the discussion did create a framework to explain the history and do some compare/contrast between civilizations, which was nice for a novice.

I love history and reading but was put off this subject in school years ago due to the horrible text books, and only started reading about the period again after taking an art history course- the images drew me in.

This book shows how the distant past has much to teach us, and one thing that caught me by surprise was that the financial system was every bit as complex as ours (futures and all), and it's impressive because they did it without computers.

The history of Mesopotamia is a subject in which I've long had interest, but little education. I knew about the "Fertile Crescent" and had impressions from church and youthful Bible study. But I didn't know my Assyrians from my Amorites, my Akkadians from my Elamites.


A superb overview of Mesopotamian civilization and history. I can't recommend this book strongly enough. The author deftly weaves the political changes of the rise and fall of the various cultural subsets (Sumerian, Akkadian, Babylonian, Assyrian, Neo Babylonian, to name the most important) in a majestic and thought provoking analysis of the underlying foundations of their Weltanschauung and the subtle changes in which this civilization changed over the millenniums from 3,500 BC to 500 BC.