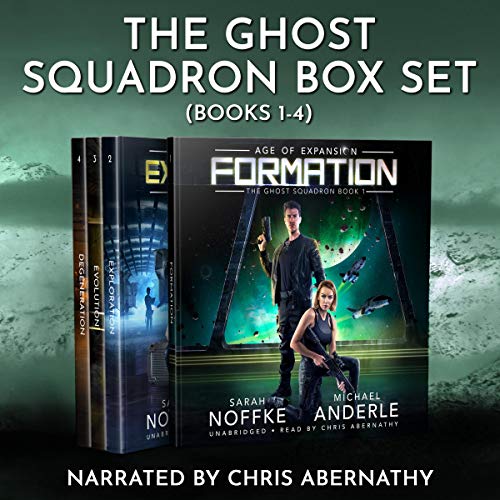 By: Sarah Noffke,Michael Anderle
Narrated by: Chris Abernathy
Try for £0.00

After 10 years of wandering the outer rim of the galaxy, Eddie Teach is a man without a purpose. He was one of the toughest pilots in the Federation, but now he's just a regular guy, getting into bar fights and making a difference wherever he can. It's not the same as flying a ship and saving colonies, but it'll have to do.

That is, until General Lance Reynolds tracks Eddie down and offers him a job. There are bad people out there, plotting terrible things, killing innocent people, and destroying entire colonies.

What listeners say about Age of Expansion: A Kurtherian Gambit Series

the story was great, however the narration was not. Although it did improve as the books went on and the characters started to retain the same voices. The performance in the first book sucked, but as I stated, it improved in later books.

you guys are great

I have been listening to these books for a while now ,and I realy do appreciate all the work you guys put into them. I use the books to keep my mind preoccupied while I work bc honestly it's boring I do alot but it's very repetitive..these books have saved my mind on many occasion lol the kurtherian universe takes up a good half of my vast audible collection...in short you guys and girls are great love yall keep it up hopefully you will see this and share bc it not just this series but all of them this is just the first time I have left a worded review socially awkward and all lmao

Spoken to as if I were a child.

This book is more for a young adult or older child. Was not worth my time, if your older then 13.

Again you have ruined the experience of stories that I would like to listen to by using a narrator who obviously is the no talent nephew of somebody's wife. I love the universe of the criterion Gambit. And to ruin the audible experience with no talent narrators is just so beyond disappointing.

So Fun to listen to.

This was definitely my kind of read. Space Federation, AI and a crew of interesting characters. I enjoy this series very much.

I received a free code for the audio box set and I am voluntarily leaving a review. So much fun to listen to the story. Now on a search for more like it.

This is fun space military entertainment.

Eddie Teach was a Federation Pilot who stepped away from the stress and has been traveling around as a - mostly – regular guy. What isn’t really regular is that he tends to pick fights with bad characters whenever he gets the chance. He is a bit surprised when General Lance Reynolds and a strong human female, Juliana, show up to offer him a spot as pilot on a special team that is secretly fighting evil.

Captain Teach and Commander Juliana Fregin begin with a refurbished craft and the aid of an E.I. (Extended Intelligence) named Pip who is connected to Juliana and ArchAngel, the ship A.I.. Their first few missions are to recruit more unique crew members. There is a many tentacled creature (a Londil) who is a genius mechanic; an unexpected addition of a Kezzin soldier; a whiz-kid hacker and a few others added to fill out what is dubbed the Ghost Squadron. Fortunately Juliana is an enhanced kick-butt leader as she and Eddie face multiple dangerous engagements before they add a true fighting force to their team.

The primary characters are well developed. The bantering dialogue and heckling relationships among the characters add a fun aspect. The story is full of dangerous action from the beginning to the end. The alien characters and world building are creative. The alien species include violent Trids – a form of hammerhead shark who carry their own mechanism to help breath out of water and the Kezzin, a species with red, scaly skin and yellow eyes. The Kezzin were once isolationists but have recently been pulled into territorial wars.

The writing is on an easily readable level and moves along well. The only drawback for me was some (though not necessarily excessive) cursing. (The blurb does include a warning which is nice.)

This collection includes Noffke’s first four books in this Kurtherian Gambit Age of Expansion side series: Formation, Exploration, Evolution and Degeneration. These four books create a consistent plot line that is mostly resolved in book four. Still, it is clear there are new adventures and missions and I may be willing to continue in Noffke’s world.

Audio Notes: Chris Abernathy does a very good job with the narration. He provides distinct voices for the characters. The delivery moves well with strong energy, including the humor and fighting. The audio enhanced my enjoyment of the story.

The narrator attempted to use various voices for the characters which were so horrible that the story was almost unlistenable.
By the last book if you stuck with it that far he did get better but by then it was too late. I seriously had a very hard time forcing myself to listen and will be returning this box set.

My 1st foray in Kurtherian world w/o Bethany Anne

I was given a credit (that didn’t work, I probably messed it up) to leave a review. After saying that I also want to say that these books were well worth the money I paid for them. It was the first four books in the Age of Expansion series and it was a great story..Hardly any cursing compared to KG, I actually wondered if Michael Anderle was part of this story line. I realized the entire solar system can not have potty mouths so Michael did contribute. The character development was well done and the plot was intriguing. I want to know more about these characters and their world. The characters did bring up Bethany Anne but only discussed that she used to be the empress nothing about how or where she was. Julianna was an associate of BA, I found it strange that more info was not supplied. We were aware of Julianna’s thoughts and no info. The narrator was good. He used a number of scratchy voices to distinguish between characters. I occasionally had to take a break, I found it a little annoying. That of course is just my opinion, you might enjoy. Give this a listen , I hope that you enjoy it as much As I did.

It took a little bit to get into this series, but it was a good read. I think I like the AI's the best.

Loved meeting new characters in the Kutherian universe. Liked that they weren't cookie cutters and had flaws. Great action and humor and I'm very much looking forward to the rest of the series. Chris did a great job bringing the world to life. I received a free copy in return for an unbiased review.