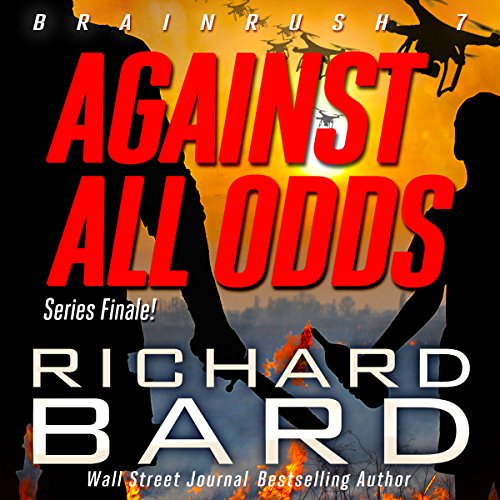 In this conclusion to Richard Bard's popular Brainrush series, Jake Bronson's family and friends face their biggest threat ever. The startling challenges revealed in No Refuge (book six) are coming to a head, and the team must wrest every resource available to them in hopes of preventing a terror-driven cataclysm unlike anything America has seen.

But the menace from within America's borders pales by comparison to the global threat revealed to eight-year-old Alex Bronson in a series of otherworldly visions. And Alex isn't the only one targeted by the mind-bending revelations.

The stakes are higher than ever. The fates of America and the world hang in the balance, and Jake Bronson's family and friends must risk everything to tip the scales against evil.

What listeners say about Against All Odds

Amazing series from start to finish a real rollercoaster of an adventure! impeccable performance by Bray as always.

I purchased the entire series after listening to books 1-3. The characters got under my skin, the pace and plot twists were fun, the use of tech was believable. Great performance by R.C. Bray - who was worryingly believable as all the characters both male and female.

An Must Read! Excellent! Series.

What did you like most about Against All Odds?

What does R. C. Bray bring to the story that you wouldn’t experience if you had only read the book?

R. C. Bray, Brings A brilliant novel, in a Brilliant series to Life, as he does, with everything, I've heard by this Amazing Narrator.

Lack of sleep, as I couldn't put this book Down!

I will just say, that Richard Bard, has written A wonderful series, with characters, that you can really believe in, and would love to meet!

Looking forward to Richard's next Novel, or series.

Sad that this is the last in the series

I have enjoyed following Jake Bronson and family and friends around the world from on adventure to another. I am really going to miss the next adventure. Hopefully it will break off to other side stories.

I couldn't stop listening! I have already recommended to friends and family. Every book in the series was equally fantastic.

Great end to an awesome series.

Loved the ride! Bronson and his son made an awesome team! Looking forward to what else the author writes!

I really enjoyed this series...it's light, easy to follow and well-written. As always, RC Bray is on point and makes the story more enjoyable for me. I recommend this to those looking for something easy and fun.

I am a huge fan of the narrator and chose the first book in the series mainly because Mr RC Bray was performing it, but stuck with the series because it was very entertaining. I will definitely be looking for more work from Bard. If you’re looking for an action packed series, this is a good one!

i just finished the final book of this series. If you like political thrillers with high octane action throughout, spanning the entire world, you will LOVE this series. Bray is an awesome narrator, and I listen to a lot of his readings. When the first three books showed up as a box set, I didn't hesitate to buy it.

I loved this book and every other book in the series. Great characters on a series of unimaginable journey's to save the world. The narrator is great and he brings the story alive with his excellent talents. A real rush!

Fantastic! Aside from the first one it’s the best of the series. Bard wraps everything up so well, answers all the questions, and leaves the reader feeling good about it all. With a bit over an hour left I was getting concerned that there just wasn’t enough time to tie all the threads together...but there was!

One of the best series on Audible. Jack you have gotten out of some sticky situations and I will miss not being able to follow your story. This is a bitter sweet book because it's like saying goodbye to a good friend.

Great story and narration! I'd love to see what else could be done with the storyline.