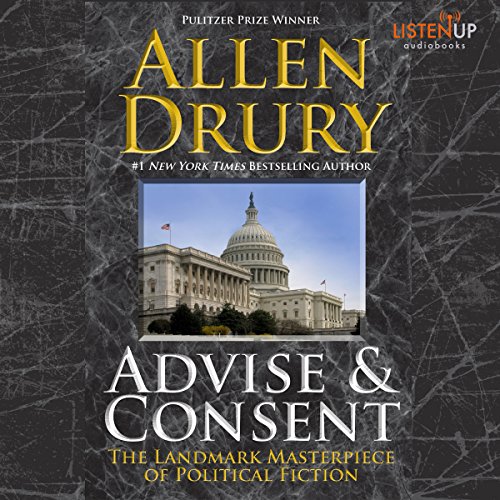 By: Allen Drury
Narrated by: Allan Robertson
Try for £0.00

Allen Drury's Advise and Consent is one of the high points of 20th century literature. It is a seminal work of political fiction, as relevant today as when it was first published. A sweeping tale of corruption and ambition cuts across the landscape of Washington, DC, with the breadth and realism only an astute observer and insider can convey.

Allen Drury has penetrated the world's stormiest political battleground and the smoke-filled committee rooms of the United States Senate to reveal the bitter conflicts set in motion when the president calls upon the senate to confirm his controversial choice for secretary of state. This novel is a true epic, showing in fascinating detail the minds and motives of the statesmen, the opportunists, the idealists.

From a Senate old-timer's wily maneuvers, a vicious demagogue's blistering smear campaign, and the ugly personal jealousies that turn a highly qualified candidate into a public spectacle to the tragic martyrdom of a presidential aspirant who refuses to sacrifice his principles for his career, never has there been a more revealing picture of Washington's intricate political, diplomatic, and social worlds. Advise and Consent is a timeless story with clear echoes of today's headlines.

What listeners say about Advise and Consent

Offered more than it delivered!

Started well but emotional level too Disney-like and emotional, disappointingly simplistic and self regarding. Wonder, found myself longing for some European cynicism.

Read by Allan Robertson, Advise and Consent is approximately thirty four hours of listening. I read this book in paperback format for the first time in the 60s, a good five years after it’s initial publishing date. Ever since then, this book has been ‘in my mind’ as the pinnacle of expressing Washington politics in fictional form. Although written in an era of cold-war fears, the Washington political machinations haven’t changed a bit and Allen Drury does a magic job. As an aside, Drury was a UPI journalist with years and years of inside information and friends. The reader need only imagine the early sixties, a bountiful time post WWII, pre Vietnam era. Take away modern amenities such as the cell phone and the Internet, replace all with phone booths (Imagine a bank of phone booths for the press in the capitol.), manual typewriters, the power of the written press, radio news, and the black and white TV evening news that we lived with at the time. Throw in post McCarthy era fear of Russia and Communism. Advise and Consent was written in 1959 and won the Pulitzer in 1960.

Thus is the setting for a congressional Advise and Consent of the President’s nominee for Secretary of State. The first half of the book is primarily setup. There are many characters and a myriad of personalities who, in the second half of the book, will be familiar old friends … or nasty enemies … of the reader. Which is which, well, that likely depends on you’re political persuasion. No spoilers, but the process involved is very realistic and a terrific American government history lesson.

The narration by Allen Robertson is stellar. It is apparent from his reading that he is a fan of Allen Drury and the story of Advise and Consent. Well worth the credit and you will be listening to this book more than once … as will I.

I can see why this won a Pulitzer

What other book might you compare Advise and Consent to and why?

Not a book, but House of Cards. It has that same Washington-insider vibe. The characters aren't really even likable, but the story is thrilling and educational.

Have you listened to any of Allan Robertson’s other performances before? How does this one compare?

Yes. I listened to Who is Martha?, a completely different kind of book, and sought out more narrated by him.

It is amazing that this came in 1959. Every word seems so relevant and current.

An excellent and detailed look at behind the scenes work in Washington. Narration is also excellent, with different voices, even accents being used to great effect. A great cast of characters, with Senator Cooley being my favorite at the moment. All 5 stars.

Would you listen to Advise and Consent again? Why?

Yes ...the reader was very good and the story better.

I read this 40 years ago and loved it more when I listened to it today. A good lesson in how the senate works and just a good story.

Too much back-and-forth dialogue.

I found the book to be long and drawn out. Might be for some no me.

I do not often take the time to review books but this one requires it. I first read this book 30 years ago and it made me want to be a senator. It made me love and appreciate our country and system of government. Amidst all the political craziness of the day it is so refreshing to see that it is as it ever was, and it is really up to us if we wish it to remain so. Read it. Trust me.

When I was a teen in the 1970’s, and reading everything I could get my hands on, my mother suggested Advise and Consent by Allan Drury. I did not pick it up until I was 53 years old and my mother had been gone twenty-seven years. Mom, you were right. It is a fantastic book and well worth reading over and over.

The audiobook, narrated by Allan Robertson, is over 33 hours long. I was very impressed by the end of the first hour. Allan Robertson does a fantastic job narrating this book. His cast of characters ranges from the President to Senators from multiple states and regions to women. It was easy to hear which character was speaking. Mr. Robertson gave them individual, recognizable and authentic voices. No easy task with a book that involves so many characters.

The book itself, written in 1959, is a political thriller. It is also a very accurate look at how things get done in Washington behind the scene. The author gets it right how most of the work is done in committee and caucus meetings. Before the bill ever hits the full Senate, it has already gone through countless hours of negotiation. While this may sound boring, Drury makes it suspenseful and exciting.

The main plot of the story is the Senate decides whether or not to confirm the President’s candidate for Secretary of State. Of all the cabinet positions, Secretary of State is the most visible and career enhancing. Several main characters are opposed to the nominee from the beginning, either through personal conflicts or ideological ones. When allegations arise that the nominee has communist sympathies (remember this is 1959 and there was still a very real Cold War with the USSR), the majority party is faced with the choice of doing what their party leader, the President, wants or doing what they feel is right for the country. Backroom deals and blackmail soon become the currency of securing the needed votes. It is still very relevant to the reader in 2016. The USSR may be gone into the history books, but the threats, perceived or real, to our country still exist.

The writing is excellent. One of my favorite quotes so far is, "who will do what and why, all the web of interlocking interests and desires and ambitions and arrangements that always lies behind the simple ultimate, final statement, 'The Senate voted today-." I love this one because it is so true. By the time the news reports what the Senate voted on, so much has happened to create those words. Another great quote is when the President is thinking about his mistake in supporting a Senator who is dishonest and power hungry. The President thinks, “He suspects he has created a baby Moloch who will continue to demand sacrifices.”

I highly recommend Advise and Consent. The audio version with the narrator’s excellent job on creating the characters is perfect. I just purchased the second book (Kindle and audio versions) in the series.

I received Advise and Consent provided by Audiobook Jukebox in exchange for a fair review.

Great for Fans of Political Fiction!

Where does Advise and Consent rank among all the audiobooks you’ve listened to so far?

This is one of the best audiobooks I've read! Strong character development and a fantastic narrator.

The plot was great at building tension. I was never sure which way the vote would swing!

My favorite scene was the speech on the Senate floor right before the confirmation vote.

All round class act

from the tale itself to the performance, this is a superb production..
it is amazing that 60 years on, nothing much has changed in American politics, making this book as relevant now as it was when it as written.

Rich and complex story (albeit dated)

I thoroughly enjoyed this complex story of the richly detailed interplay of well-limned characters struggling with intense personal and professional dilemmas, played out on a national stage.

Yes, this novel, written in the 1950s, lacks a 21st century understanding of racial and sexual issues, but it’s still well worth a read. It was especially refreshing to see the lack of the toxic, lockstep partisan politics that infests the American scene today.

The audio presentation was exceptionally well executed. The dozens of characters were voiced vividly, and it was easy to distinguish the speakers from each other. The only quibble I had was the presenter’s evident difficulty with female voices. He made them sound rather silly. But since women played so little role in the story, that was not an insurmountable impediment to the flow of the audiobook.