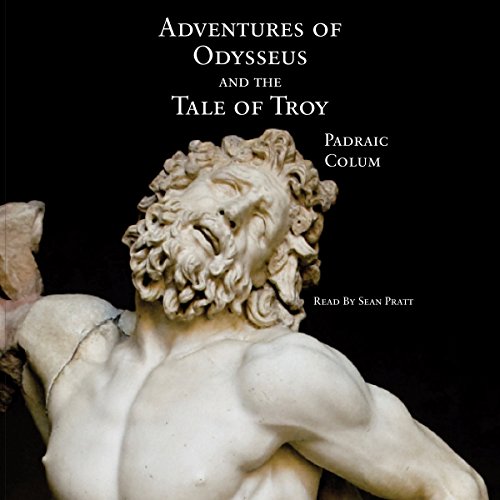 Adventures of Odysseus and the Tale of Troy

Adventures of Odysseus and the Tale of Troy

"Colum's stirring telling of the Greek epics is still unequaled as an introduction to the classic myths for young readers." ( Publishers Weekly)

For the life of me I can't understand why the author n ended to write this in such archaic language. We don't speak like that and neither did the ancient Greeks. My son, who is 8, and I found it most distracting.
Why are Penelope's suitors called wooers? And so many other jarring idiosyncrasies made listening to this audiobook more of a penance than a pleasure.
Sean Pratt's reading borders on the monotone. His inconsistent pronunciation of names made us look at each other in frustration.
I would definitely not recommend.

i like Padraic Colum's style, and would certainly listen to and read more of his work. Pratt's narration, however, was so mournful and soporific that much of the excitement of the scenes he was describing just got lost. Odysseus came across as...well, lacking motivation, and a bit of a wimp, which is hardly the effect that Colum was going for! Pratt has a beautiful, articulate reading manner, but to me it didn't suit the fire and movement of the subject matter.

All that said, this is a thorough exploration of the travels of Odysseus, and will help unknot the background surrounding the woes of Troy. If you can get past the reader, you'll enjoy this.

This is wonderfully written, following closely to the original but in a way that is immediate and fresh. The characters seem real and their motivations and thoughts are understandable, though sometimes tragic. I found I really cared about what happened to them and the choices they made. It is beautifully read and a spell binding story.

Honey, I'm home - twenty years late! Adventure, love, war, one-eyed giants, wrathful gods, sultry sirens and a rather roundabout journey back home to the wife. The question is, did the fair Penelope believe his excuse that the traffic was a little heavy on the way home? An epic tale, never boring, very well read, with a wonderful flow and rhythm of language. It's a 2700 year-old precursor to the Lord of the Rings, the Hitchhiker?s Guide to the Galaxy and Alice in Wonderland. What our great-great-great (etc) grandparents listened round communal hearths, instead of watching reality shows and soap operas. Audio quality (at level 4) is excellent.

13 of 15 people found this review helpful

This is great way to start learing about athe ancient Greek legends. If you aren't up to tackling "The Odyssey" or "The Iliad", this is a great way to find out the basics of the stories.

Inspires you to read the original in its wonderful poetic splendour. I was amazingly surprised at the Odyssey. I loved it. So much more than the Iliad! Worth your while!

This abridged version of Homer's "Odyssey", translated into contemporary English prose, is disappointing. All the interesting female characters have been edited out. We barely see Penelope. The female characters are what make the story so compelling. Since antiquity scholars have speculated that the Odyssey may have been written by a woman since, unlike the "Iliad", so many female characters have significant and interesting roles: Penelope, Helen, Circe, Calypso, Eurycleia, Athena, Nausicaa, Arete, and Ino. If you are interested in novels which use Homer as a starting point, I recommend reading "Circe" by Madeline Miller and "Homer's Daughter" by Robert Graves which are both based on the "Odyssey, and also "The Silence of the Girls" by Pat Barker which is based on the "Iliad". The narrator's voice is pleasant but rather monotonous and gives the story a ponderous and weighty feel. If you want to listen to (or read) a simply brilliant translation of the "Odyssey", then try Emily Wilson's translation. Her introduction and translator's notes are very helpful and insightful. This work pales by comparison.

This is a fine book, aged well for being 100 years old. It is available for free at libri vox . com

I enjoyed it very much. The way the book is written and read keeps you interested in the book.