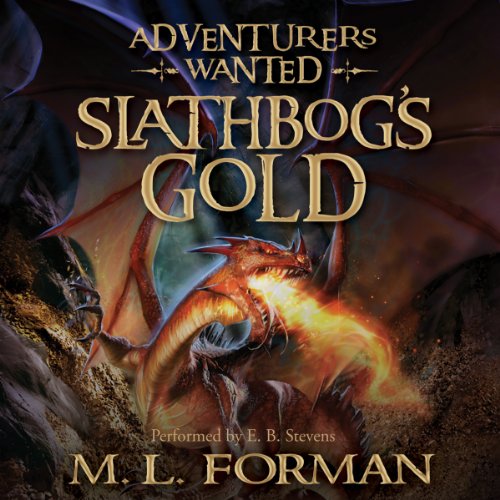 Do you have the courage, the wits, and the skill to claim a dragon's hoard? If so, apply within . . . The sign is small, tucked into the corner of Mr. Clutter's bookshop window: “Adventurers Wanted. Apply Within.” No one but fifteen-year-old Alex Taylor even seems to notice it is there. And for Alex, who has wished for a change in his life, it is an irresistible invitation.Upon entering Mr. Clutter's shop, Alex is swept away on an incredible adventure to a faraway land filled with heroic warriors, mysterious elves, and hard-working dwarves. Alex becomes the eighth man in a band of adventurers seeking the lair of Slathbog the Red - an evil dragon with a legendary treasure. Along the way, Alex and his new friends must battle dangerous trolls and bandits, face undead wraiths, and seek the wisdom of the Oracle in her White Tower. Alex's adventure takes him to distant and exotic lands where he learns about courage, integrity, honor, and, most importantly, friendship.

"The beginning of an epic fantasy series." ( Library Journal)
"Entertaining ... The series potential is limitless." ( Booklist)

this is the perfect book for anyone

who loves adventure stories or dreams of going on adventures. I have never come across these books before, (perhaps they're only available in America or on audible), but don't let that put you off. if you were brought up on & enjoyed the Enid blyton adventure stories & enjoy the the more recent books of Harry potter & Artimas Fowl books or similar then you will love these books, though best listened or read in order.
this is the 2nd time I listened to this story & enjoyed it just has much the 2nd time around.

"Questioned" is not a synonym for "asked"!

What could M. L. Forman have done to make this a more enjoyable book for you?

Not used the word "questioned" instead of "asked", or better yet, "said", at every possible opportunity!

Not been so gratuitously derivative of Tolkien that I daren't allow my kids to read it in case they think Tolkien copied Forman (assuming I’m prepared to run the risk of them catching the "questioned" disease, which I'm not).

Not used adjectives instead of adverbs, or better yet, dialogue - rather than writing "he said (questioned!) in an angry tone", write "he said angrily", or preferably have him say something that lets the reader know he's angry!

And finally, the totally flat characters - the protagonist who rapidly develops virtually godlike powers, to the apparent total lack of surprise or envy of any of the other characters, all of whom are wholly interchangeable.

Would you be willing to try another one of E. B. Stevens’s performances?

Yes, but it would be despite, and not because of, being a Stevens performance.

The book was mildly entertaining and there were a couple of original and imaginative ideas. I'd try one more in the hope that, having exhausted most of Tolkien's major themes, Forman might find his own voice.

The wooden delivery and entirely gratuitous French, Russian and German accents deserve a special mention - although it strikes me that the narrator was desperately looking for a way to differentiate the many featureless characters.

Trouble getting to sleep? Listen to this

If you could sum up Adventurers Wanted, Book 1 in three words, what would they be?

Awful plots and irksome characters. The character's are made so unbelievable by the poor performance of the narrator. All the characters voices sounded so identical I had a hard time guessing who was who.

None... All the characters may well have had the same name, because they all sounded the alike. Maybe they were all related, who knows!

What does E. B. Stevens bring to the story that you wouldn’t experience if you had only read the book?

An annoying attempt at an Irish accent, that sounds more like a Swedish Jamaican Scott.

I did laugh and cry... Cried when I punched myself in the eye when I got past the first chapter; and laughed when I got my credit back.

As I used my iPad I was unable to listen to a sample of the audiobook, as Audible had taken this function away from their mobile site- something which they have reinstated now, so I thought I would give it a go, how surprised I was. The story is a particularly bad take on the hobbit. The characters were flat and lifeless and uninteresting, and the story is sluggish and moves slowly to its unexciting conclusion.

We picked this book up in a bookstore for my 11 year old son and after he read this one and the next in the series, I asked how he liked them...his faced lit up and he went on and on about magic and elves, swords and wizards. I love a good fantasy novel, so I decided to give it a try on Audible. Wow! Great story, great performance! EB Stevens did a fantastic job of mixing different accents, octaves, and tones to make each character their own. Well done and highly recommend it to anyone!

Great book for all ages. Hard to put down

Where does Adventurers Wanted, Book 1 rank among all the audiobooks you’ve listened to so far?

This is a book that is great for kids and adults. I really enjoyed it and it was very well put together. Already 3/4 down with book 2 and it is as good as the first one.

Alex Taylor is a must for the best characters. He has honor without measure.

Have you listened to any of E. B. Stevens’s other performances before? How does this one compare?

No first time I have listened to E.B. Steven's but will keep listening to him going forward.

Yes the way the world was built with the limits on magic and adventures was great.

What did you love best about Adventurers Wanted, Book 1?

Overall the series was entertaining and fun. It was well performed and easy to follow.

I did not realize when I bought the series that it was tagged for teens. I bought it under the Fantasy Genre and it was obvious fairly quickly that the book was not going to be thrilling and challenging. It was entertaining. But there were some very big mechanical problems with the Adventurer's Bags in particular. They were extremely overpowered and underutilized. Plus there would have been some great opportunities to use the bags that were never realized. Plus, Alex gained far too much power too quickly and then obvious magical solutions were overlooked in lieu of mundane plots.

I know that some of this is just trying to keep it simple for the teen market, but some was just bad planning and plotting on the Author's part.

Overall it was fun and upbeat and I don't regret giving it a listen, but it is no WoT or GoT.

Thrilling and kept me looking forward to the next

Would you listen to Adventurers Wanted, Book 1 again? Why?

Yes, To look for anything I missed the first time.

Have you listened to any of E. B. Stevens’s other performances before? How does this one compare?

Yes, He has a lot of diversity

No, Just kept me engaged for hours.

This was one great book very fun and upbeat

Would you consider the audio edition of Adventurers Wanted, Book 1 to be better than the print version?

What was one of the most memorable moments of Adventurers Wanted, Book 1?

The whole book was good can't pick just one

What does E. B. Stevens bring to the story that you wouldn’t experience if you just read the book?

Brings it to life

The main character is a lucky, insincere, wimp. The majority of this story readers travel with a group of interesting characters and meet elf, dwarf and other ostensible characters. Each of these characters tells Alex the MC, that he is special. And each time Alex basically responds, “Aw shucks, me?” Along the way he picks up a magical sword which takes over him and turns him into a killer that saves the day.
Alex never makes a difficult decision, is never put to the test, never takes responsibility- he’s just all about luck and annoying false humility.
The author and reader uses great voices for his characters, but his narration is annoying. Every narrated sentence includes over extended syllables. “Alex was suuuure to eat his hooot soup.” This is the first time I have ever counted down the minutes until the end of an audio book.

My teen kids and I really enjoy this genre, and this book didn't disappoint us! We can't wait to hear the next book in the series. Narration was very good, and the story line was well thought out and exciting. Plenty of foreshadowing to future events, I've already bought the next two books in the series!

A Most Excellent Adventure

Where does Adventurers Wanted, Book 1 rank among all the audiobooks you’ve listened to so far?

This was an outstand start for M. L. Forman. I bought this book for my kids, 8-16, and when I saw their enthusiam for the story, decided to give it a try. I was very impressed with the pace of the book, a great blend of action, suspense, learning, and all the time character building. This is right up there with some of my favorite teenage fantasies. I liked it much better than the Wheel of Time series. Call me crazy.

If you are looking to start a series, this is a great choice. After just finishing book 4 I find myself hoping the adventure does not end with book 5. Great characters and plots. Full of magic. Now if I could just get one of those magic bags.

The narrator always spoke with an excited breathlessness that was not fun to listen to. He made all the characters chuckle as they spoke even when it was apparent from the writing that the character was a very serious one.