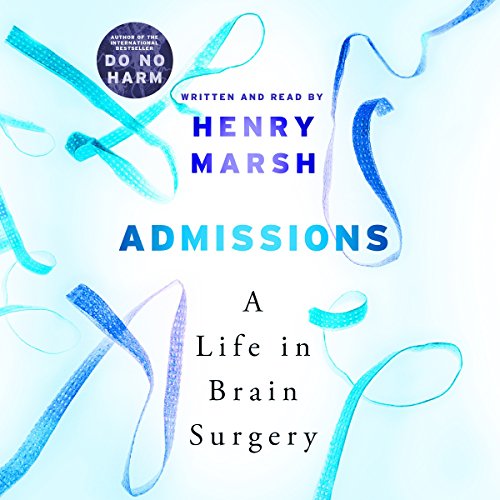 Henry Marsh has spent a lifetime operating on the surgical front line. There have been exhilarating highs and devastating lows, but his love for the practice of neurosurgery has never wavered. Prompted by his retirement from his full-time job in the NHS, and through his continuing work in Nepal and Ukraine, Henry has been forced to reflect more deeply about what 40 years spent handling the human brain has taught him.

Moving between encounters with patients in his London hospital to those he treats in the more extreme circumstances of his work abroad, Henry faces up to the overwhelming burden of responsibility that can come with trying to reduce human suffering. Unearthing memories of his early days as a medical student and the experiences that shaped him as a young surgeon, he explores the difficulties of a profession that deals in probabilities rather than certainties and where the consequences of your decisions alter the lives not just of patients but also of those around them. The overpowering human urge to prolong life can often come at a great cost to those who are living it and to those who love them.

In this searing, provocative and deeply personal memoir, the best-selling author of Do No Harm finds new purpose in his own life as he approaches the end of his professional career and a fresh understanding of what matters to us all in the end.

What listeners say about Admissions

Admissions. A life in brain surgery.

I so much admire the courage of Mr Marsh who has done so much to show that a group of people who have been put on a pedestal by patients and staff are in fact human like the rest if us. Fascinating though the description of his work is, I found myself wanting to know more about the progress of his work on the cottage. This book has been written by a deeply thoughtful and almost painfully honest person. So few of us have the courage to exam ourselves with total honesty and fund aspects of our lives and behaviour wanting.. Thank you Mr Marsh.

So good I listened twice

As a nurse,who trained in the same era. I found it interesting, stimulating and so comforting. I am not alone in my frustration and disgust at what has happened to our wonderful NHS, and to old England.
Well done ! A candid, honest and insightful book. Thanks

This is a NEGATIVE review.

I hate leaving negative reviews but I can’t, in all honesty leave a positive one.
I purchased book 1 in this series and it is excellent. I wanted surgery, drama, and well described results and outcomes. I got them all.
Book 2 however is a moan and a rant. Hours of ranting about his age, the NHS, his age (again!) his doomed career, the lack of respect in the NHS and in general. He then transfers his rage to his surgical stays in Nepal and Ukraine moaning non stop about everything. Very little surgery, all of it negative.
This could have been brilliant. It isn't.

Another fabulous book from Henry Marsh

This has been my second listen and, once again, I’m bereft to reach the end. Henry’s self-deprecating way of storytelling is compelling - he fully admits his short-comings which, in the medical world, is admirable and somewhat refreshing, making his triumphs all the more pleasing. His narration is superb and I didn’t once find myself drifting. I hope that the Lock Keeper’s Cottage proved to be everything that he dreamt it would be.

Long on biograohy and short on brain surgery

Long on biography and short on brain surgery but intetesting none the less. A very honest book.

Beautifully explains the process and ups and downs of brain surgery. This man should be knighted!

A wonderful and honest account of an extraordinary career. Humble, insightful and enthralling. I have already recommended it to others to listen.

Frank and honest view of the world he inhabits

This was a real eye opener I’ve listened to Henry’s desert island discs episode on that famous British radio station and he seemed a very fascinating and interesting man who has had his own battles and demons to overcome. His view of the NHS and of surgery in general is very refreshing and shows a true understanding of his craft and of the wider issues affecting us all as we age. I only hope if I ever need a surgeon like this that it’s someone as pragmatic and understanding. The book can come across a little negative and disgruntled and at times depressing but this is the reality facing a lot of people and shows true integrity of the writer that it’s not just smiles hand shakes and big salaries.

Brilliant on all levels

Brilliant on all levels, found this enthralling. A complex man undertaking an incredibly complex job. It was good to hear him reading this himself. The previous book would be better if re-recorded with Henry Marsh reading that too.

Very honest analysis of his life's work. I really enjoyed this, it allowed the listener to understand the thinking behind why certain doctors act a certain manner and it also gave insight into this retired surgeons greatest regrets.

Title means more than you think

I enjoyed Henry Marsh's first book Do No Harm which gave insight into the field of neurosurgery through case studies and their various outcomes. Admissions is different. The author uses moments from his life and work to share his thoughts about life, death, retirement and everything in between . His admissions will resonate with those of us in the medical field and those who wish to know more about the workings of a medical mind. I will listen to this again, and probably again after that.

Fantastic book, well read, honest, and insightful account of his career and how it impacted on his personal life. Would absolutely recommend.