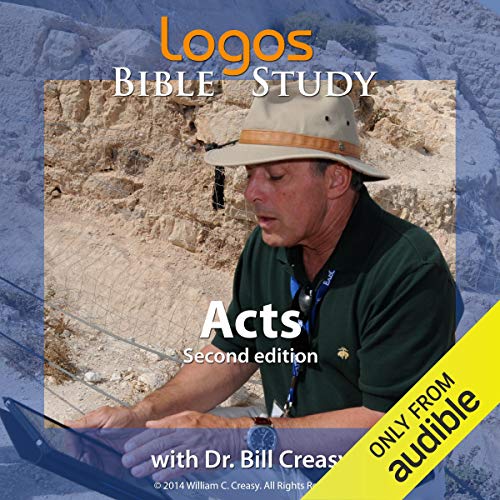 Dr. Bill Creasy of Logos Bible Study uses a literary, historical approach to examine and enliven the bible for modern listeners. Dr. Creasy draws on his studies, travels, and personal anecdotes to depict a vivid picture of the works of scripture. Somewhere between a sermon and a college lecture, he delivers these audiobooks with authority but a pleasantly friendly voice and a touch of fun, using contemporary references.

Dr. Creasy discusses Acts in depth, putting it in context as a continuation of the Gospel of Luke, why Luke was writing it and what audience he was writing for. He talks about the importance of this book historically and spiritually as it accounts the early Christian church and the Apostles who spread it.

Acts is Luke’s sequel to his Gospel. Like his Gospel, Acts is addressed to a particular man, Theophilus, and it tells the story of the birth of the Church. After Jesus’ death, burial, and resurrection, he ascends into heaven to sit at the right hand of the Father. Ten days later, the Holy Spirit arrives in Jerusalem on the Jewish feast of Pentecost, and the Church is born. Acts follows the Church from its birth in Jerusalem through its exponential growth and inevitable persecution, led by Saul of Tarsus.

Incredibly, Saul later confronts the risen and glorified Christ on the road to Damascus, where he becomes a believer. And not just any old believer! Saul becomes Paul, the great Apostle to the Gentiles. From Chapter 9 onward, Acts follows Paul on his three missionary journeys as he takes the Gospel into Asia Minor and Europe. In the end, Paul evangelizes all of Asia Minor, a good chunk of Europe, and he writes 13 of the 27 books of the New Testament. This is an incredible story, and no one tells it better than Logos Bible Study’s Dr. Bill Creasy.

What listeners say about Acts

Everything about this series of studies on Acts is spellbinding. Dr Creasy brings the history and the characters to life whilst embracing the text as the inspired word of God. I am so excited to listen to every single audio Bible study in Dr Creasy's vast collection. My drive to and from work is now something I genuinely look forward to!!!

Bill Creasy has a wonderful speaking ability that holds the audience. The book of Acts is pivotal to the christian church. When you read it by yourself it is packed with so much information to study and digest. When you here Bill Creasy talk, he paints a picture. You are are transported back in time and immerse yourself in that time period. This puts a whole different perspective on the book. He also give so much more information that you wouldn't get otherwise. Anyone with a faith should here this. Anyone without a faith should also here it as it will answer so many questions as to why people like me have such a strong belief in the bible.

I love the way Dr C ties everything together helping me to make sense of all the books in the New Testament. It has been so helpful and such a joy to listen to. I've listened through this slowly, repeating sections and taking notes. I have picked up so many nuggets. I love the way Bill presents the Word of God. HIs passion and enthusiasm and the anecdotes also help bring the text to another level of relevance. It's enjoyable listening. Thank you. LOVE IT!!

Stellar presentation of an important book

Once again Dr. Creasy has enhanced my understanding of a familiar book through scholarly use of geopolitical and historic context. Although I have studied Acts in the past, this time around I learned more about Paul and his companions than ever before and as a result, for me they are now real and not just paper personalities. As always, I appeciate his clear presentation liberally flavored with good humor. Anyone looking for a Bible study that they can relate to needs to look into this series.

Paul, as described by Dr. Creasy

Bill Creasy puts you right next to the Apostle Paul as a man, and as one touched by God , who will write 13 of the 27 books in the New Testament. Here, you will meet a man who hated Jesus and all His followers then came to Love Jesus with all his heart and soul. Loved listening to Luke then Acts by Bill Creasy, and you will too!

this was a very eye-opening experience for me. I'm grateful that Dr Creasy put such time and effort into studying and understanding scripture. I plan on continuing with his series of different books of God's word as I move forward into understanding.

As with all Der Creasy’s lessons... this is wonderful

Whether you are a believer and striving to deepen your faith, or a non believer who wants to understand the most important book in history... Dr Creasy make the Bible come to life. I’ve listened to hundreds of audio books and read many more. These are definitely worthy of your time.

Start with Genesis and work your way through as the Bible was meant to be read, as a book inspired by God. It will be fun and insightful regardless for your background.

So many answers to so many questions

I have always wanted to better understand the origin and religious dynamics that brought about the 'great divide' between the Jews and Christians. Dr. Bill Creasey's presentation of the book of Acts provided a detailed and vivid account of these significant events in a manor that answered all my questions. Bravo!

This book made me feel like I was there with Paul and the other disciples. Dr.Creasey explains the bible in very modern terms. Also since he has been to some of the places the story is talking about he adds more color to the study.

Hated to see it end. Makes the bible come alive with contemporary language and comparisons.

Great detail and behind the scenes of Acts

Dr. Creasy is very entertaining and provides great detail for each verse of Acts. I had a hard time putting it down and can't wait to start the next book.

My first time actually studying Acts. The worse the Creasy does is repetitions over and over. I’ll continue to use for studying but overall not my fav

Great background and overview of Acts

Dr. Creasy is very knowledgable and has a sense of humor as well. He references many geological areas. The book was helpful in my study of Acts.