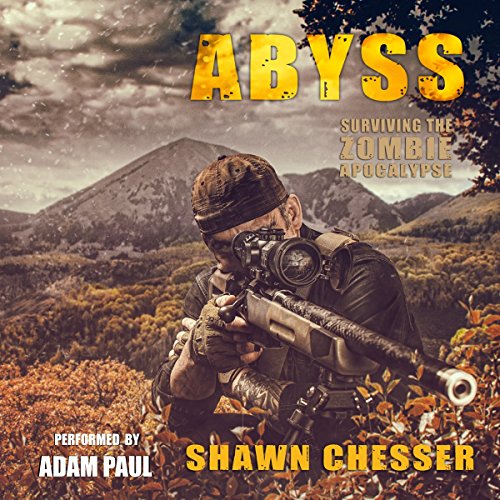 By: Shawn Chesser
Narrated by: Adam Paul
Try for £0.00

Outbreak - Day 1: Presidents, premiers, entire governments disappeared instantly, like a fragile house of cards in a hurricane. Some hid deep underground or holed up in fortified strongholds, but most were swallowed up by the dead, never to be heard from again.

For Cade Grayson - doting father, faithful husband, and patriotic Delta Force operator - the above definitions are much more than mere words following a dictionary heading: They all make up his new reality.

Following a successful mission to the nation’s former capital, Cade returns to the compound in rural Utah to find his life irrevocably altered.

Five days later and still reeling from the catastrophic event that pushed him physically and mentally to the edge of the metaphorical abyss, Cade sets out to fulfill a longstanding promise: escort his daughter, Raven, outside the wire to begin the long process of honing the skills she will need to survive the zombie apocalypse.

But things happen while they are away that put the integrity of the compound and the lives of its survivors in jeopardy.

After unknown entities make a surprise appearance outside the Eden compound wire, and suspicions arise among the survivors that one of their own may not hold the group’s best interests at heart, Cade sets out on a new mission saddled with many more questions than he has answers for.

Will Cade find outside the wire all that he is searching for?

Will the Eden survivors discover a traitor in their midst while Cade is away?

Most importantly: After looking into their own personal abyss, will the denizens of Eden ever be the same?

Discover who has what it takes to survive the Zombie apocalypse...and who doesn’t.

What listeners say about Abyss

As ever Shawn chesser does not disappoint. the action and the character's that you have loved from the 1st book have you hooked! Roll on the next book as I just can't wait! loved this book!

Cade and the gang are busy yet again. Shawn Chesser has created a world that you are drawn to.

I absolutely love this book series. This was the first one I listened to on Audible and the narrator is horrible. he's so bad that it takes me out of the story. His tough guy voice for Cade sounds like Christian Bale's Batman doing a bad impersonation of Clint Eastwood, Duncan sounds the same but with bad southern accent and Taryn, and Wilson who I believe are from Colorado sound like Okies. Shawn please don't let this guy ruin anymore of your books.

PLEASE PLEASE use a dictionary

If you've come this far, Abyss will entertain...

Exciting enough to keep you listening. Paul does a decent job with a few mispronunciations that should only annoy extremely annoying grammar nazis like myself. 4 Thtarth

Even at book twelve the story does not disappoint nor slack in terminology or lapse into new lazy styles. Beautiful series, each book is a new adventure that keeps me awe inspired and loving and dreading that the author does not shy from tossing away the “invisible” aspect of main characters that so many other books keep so as to not introduce new lives.

What can I say, Mr Chesser delivers yet another example of what post-apocalyptic writing should be like. His ability to draw you in and become so ingrained in the characters and their outcome is superb. He drew out emotions in me while I read, to such a degree, that I was as shaken as the characters in the book.
Thank you Mr Chesser for your continued work and letting me be a part of the story.

Another great story from Chesser!

I love all of his books, on the edge every single book he writes and normally i dont like anything but RC Bray narrating but all of The books in this series the narrator has grown on me. cant wait to listen to book 13.

Adjustments are made, sorrowa are dealt with and revenge is inevitable. Cade will go to any length to make his daughter safe.

I love this series but the way Adam pronounces Saiga makes me cringe, every time.