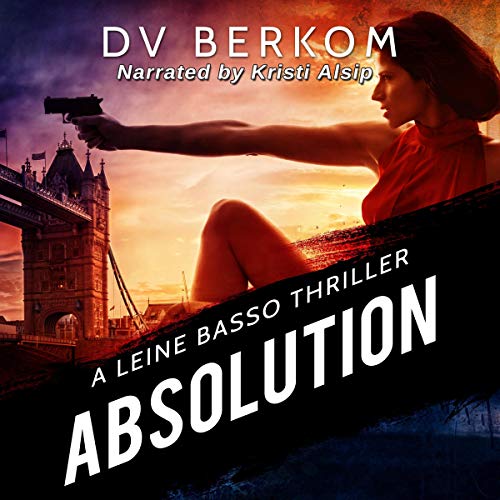 There’s only one sure way to stop a terrorist....

Former assassin Leine Basso has severed ties with everyone she loves to keep them safe while she hunts for the ruthless terrorist Salome. There are rumblings that the French-born assassin is planning another attack, and Leine’s determined to stop her before it’s too late.

Can Leine thwart her plans, or will Salome’s own twisted vengeance mean the end for Leine and everyone she loves?

From London to Edinburgh to the City of Angels, Salome’s making a comeback - and that comeback includes killing Leine.

What listeners say about Absolution

Wow, if you like action adventure stories then you will love this book. I read this as the book version so knew what to expect and had to add it to my audio book collection. So glad I did because it has been a while since I read it and a few Leine Basso books ago, this meant it was like listen to a new book and even though I knew the main plot the twist and turns the story took I had completely forgotten. Like the rest of the series so worth getting.
Two trained female assassin working for different sides, decided they can't live with the other alive in the world and so go head to head in one explosive book. Not wanting her friends used as bait and not sure who to trust Leine Basso (the heroine) goes it alone, at full throttle. This lead to an explosive book that you just have to listen too, even if you haven't read the rest of the books in the series but I would recommend that you do. It was nice also to have a few familiar faces back in the book too.
I have read or listened to all Dv Berkoms books and enjoyed them and this is no exception, with the added bonus of most of the action being set in London England, so many of the places featured I knew, an author who do her studying to make her books as real as possible.
I like the narrator and I am glad the author has stuck with her as the voice of Leine throughout the series, even if she is so busy we have to wait a while for the next instalment.
I was given this free review copy audiobook at my request and have voluntarily left this review.

Leine is back and better than ever.....

As someone who has been following the Leine Basso series, I was so excited to read this latest installment. It did not disappoint on any level. I thoroughly enjoy the adrenalin-fueled adventure (the author is truly gifted with an abundance of imagination), but I also greatly appreciate the skillful way D. V. Berkom presents the characters with various situations, challenges, and experiences that clearly influence the development of that character. The main story in each book is satisfactorily resolved but there are secondary/background story lines that allow one book to neatly segue into the next. There are several supporting characters which appear in multiple books and they, like the main character, are evolving as the series progresses. This story featured another conflict with Salome, a diabolical terrorist with a grudge against our protagonist, Leine. Salome plunged the depths of depravity in this installment and took things to a personal level in her attempt to exact revenge on Leine for having foiled her previous plans.

Bottom line: if you enjoy enthralling plots, high-octane action, exotic locales, and an intelligent and supremely capable heroine (Leine kicks a**), you will love this series. Unlike many books of this genre, you are not deluged with foul language, you will not be subjected to excessively gruesome descriptions, and you will not be taunted by a cliffhanger ending. There is violence but violence is neither unexpected or unwarranted in a story about fighting human trafficking and terrorism. This story will draw you in and keep you turning the pages until the very end. Highly recommended. D. V. Berkom is an awesome author and the narrator of the audiobook, Kristi Alsip, really brought the characters to life with her outstanding performance .

While I did purchase a copy of this book, I won a drawing for the audiobook and I am voluntarily offering my honest and unbiased review.

I am a big fan of Leine Basso. This is excellent for its action sequences. It also is quite different from other books in the series. The locations go from London, Paris to Los Angels.

The reader did an excellent job. She was very clear and used dialect where appropriate. This was a good choice for narrators.