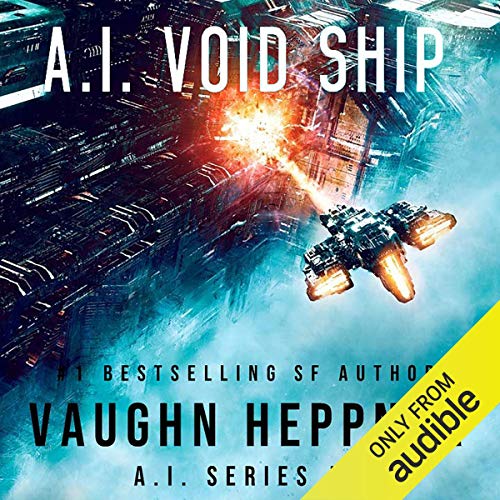 By: Vaughn Heppner
Narrated by: Marc Vietor
Try for £0.00

Through desperate tactics and by deliberately keeping a low profile, we survived the machine assaults longer than any human or cybership thought possible. But now our luck has deserted us. The main A.I. brain-core has just given human extinction top priority. The robots are massing an armada to exterminate us.

We’ve done what we could in expectation of this grim day, grabbing enemy factory planets to mass produce warships. And we found an ally, the Star Lords of Roke. But it’s just not enough, damn it.

We need more...like the alien void ship Hawkins once saw. Or maybe we can make a deal with the treacherous Cog Primus. One thing’s sure. We’d better do it soon, or we’ll join thousands of other extinct species obliterated by the hateful death machines.

A.I. Void Ship is the sixth book in the series chronicling humanity’s war for survival against the galactic machine juggernaut.

more and more religion creeps in, and after just buying the nemt two books i novice its a new narator. i then went ahead and checked the reviews for the next book, and in just gonna stop here. such a pitty. ending of this one was lazy, and it only seems to get worse in rhe next book. sigh.

You have to listen to it

I find this saga impossible to stop reading. I would like that the next one will be more character focused than action focused.

I loved this book, I really enjoyed it, when is the next one due out?

Just keeps on getting better!!!!

Between this and Vaughns Last starship stories, he's becoming my new David Eddings of the 00s.

Interesting characters, interesting story and the narration is top notch.

Needs to be a bit longer

enjoyed the continuing journey, however was over too quickly. I feel this book needed a bit more padding out and could have easily been another few hours without detracting from the build up.

The delivery of the book is once again very good and consistent with other books in the series which is worth a great deal when the characters are in part shaped by the person reading the book.

The story is starting to show a bit of turn handle escalation in how the same approximate things happen but on a grander scale than the last time. This doesn't make it any less worth the time spent to experience the story. it does start to touch on some topics I've always wanted to know more about relating to the A.I. as a race. here's to hoping it continues!

More of the same but on a bigger scale

The battles get more desperate, so the characters struggle to find ways out. Its all ok if you have listened to the previous books and will like want the story to continue for sometime more.

Absolutely 💯 love this series!! Will keep buying more and more I wish Dennis E Taylor would have made a bigger series like this author for Bobi verse another favorite!

Vaughn's Bigotted Narrative made me stop

Regrettably, I have resolved to stop buying vaughns books altogether.

Vaughn and Veetor are both stellar writers and storytellers respectively. There is no denying the excellence of what's presented here or indeed in the starship series, arguably his magnum opus.

What initially started as a pet peeve before categorically becoming an insult was Vaughn's portrayal of Islam; in spite of his background in history, the author flatly pushes medieval judeo christain stereotypes of the muslim faith without any regard for the idea that his audience could potentially come from that background.

The dark perood of the ottomon empire does not represent islamic history, whether across asia, africa or indeed in the middle east. The idea of harems or indeed Jihad being perscribed as a holy war against so-called-infidels... It is too much, particularly when it comes from a third person narrative (i. E the author)

I applaud his subtle integration of religion, but I certainly condemn it when it comes at the expense of others through archiac stereotypes that has no place in a more imformed world today

For performance, I gave 5 stars as veetor is excellent.

Good book. Vaughn Heppner keeps his books going at a good pace and does not seem to overtell a story. Great narrator. I enjoy listening to Marc Vietor. He is a great narrator.

great addition to the series

absolutely in love with this series, and if I'm being honest, all of Vaughn Heppner

I hate the continuous descriptions of characters land technology that we already know from reading the five previous books. This is an all too common failing in series; the author pads the book with content from prior books. I feel like the author considers his fans to have no memory Narrator is excellent.

This story is not new .However.

I love the imagination of Vaughn Heppner and the dialogue between the characters and the antagonist. Eventhough the story of men vs. machines is not new,the author gives answer to many questions we dont get in other similar stories. The original part is in the way he justified the character acction in a specific detail that we wont be able to see in a movie.

Please keep it going, the story and plot and performance were just superb!!
Thank you, my money well spent!!