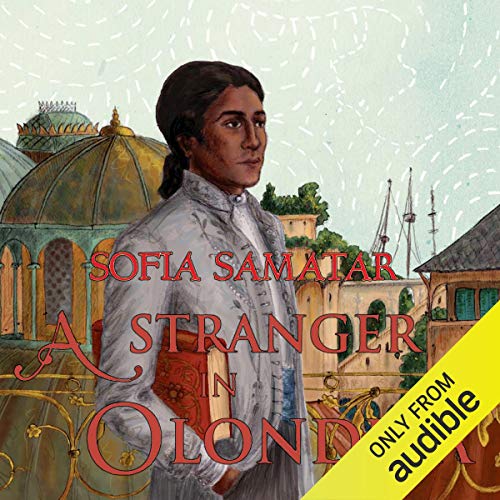 A Stranger in Olondria

Being the Complete Memoirs of the Mystic, Jevick of Tyom
By: Sofia Samatar
Narrated by: Josh Hurley
Length: 13 hrs and 8 mins
Categories: Sci-Fi & Fantasy, Contemporary Fantasy
4.5 out of 5 stars 4.3 (6 ratings)

A Stranger in Olondria

When reading and writing are the most important things in the world. Jevick, the pepper merchant's son, has been raised on stories of Olondria, a distant land where books are as common as they are rare in his home - but which his mother calls the Ghost Country. When his father dies and Jevick takes his place on the yearly selling trip to Olondria, Jevick's life is as close to perfect as he can imagine. Just as he revels in Olondria's Rabelaisian Feast of Birds, he is pulled drastically off course and becomes haunted by the ghost of an illiterate young girl. In desperation, Jevick seeks the aid of Olondrian priests and quickly becomes a pawn in the struggle between the empire's two most powerful cults. Even as the country simmers on the cusp of war, he must face his ghost and learn her story before he has any chance of freeing himself by setting her free: an ordeal that challenges his understanding of art and life, home and exile, and the limits of that most seductive of necromancies, reading.

A Stranger in Olondria is a rich, immersive fantasy that circles around and away from and back to the transportation of reading and how ideas can be carried far from their origins in something so simple as a book.

the story is much better than the narrator. i’m sorry to say the narrator rather ruins it. he just was not able to connect with the material. i beg an update.

The story wasn't what I expected from the review that lead me to acquire the book. However, I enjoyed it for the most part. There were times I thought the story meandered too much and I lost interest, but other times I was very interested. The narrator was fine I guess. I just finished a book before this with the fantastic narrator Michael Kramer, so I'm a little biased. Sometimes I thought the language was too flowery and contrived, but it is after all a book about the love of reading. In all, I would say it's worth a listen.