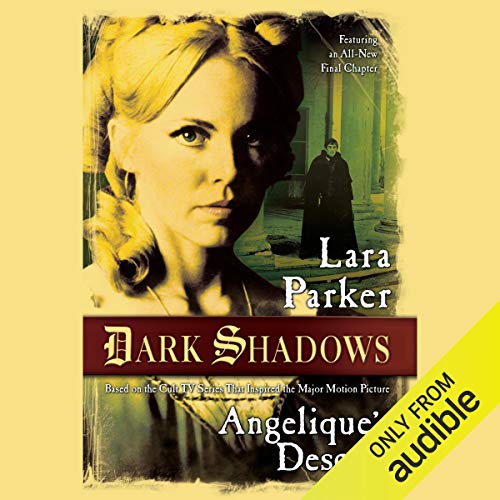 Dark Shadows' two most popular characters, Barnabas Collins and Angelique, were eternally bound by love and hate. Now actress Lara Parker, Angelique herself, tells the story of how it all began.

The dashing heir of a New England shipping magnate, Barnabas Collins captures the heart of the exquisite, young Angelique amidst the sensual beauty of Martinique, her island home. But Angelique's brief happiness is doomed when Barnabas deserts her and becomes engaged to another. With this one betrayal, Barnabas unleashes an evil that will torment him for all time.

For Angelique is no ordinary woman. Raised in the mysterious black art of voodoo witchcraft, she long ago pledged her soul to darkness and became immortal. Vowing to destroy Barnabas, a vengeful Angelique damns him to eternal life as a vampire - a companion to accompany her forever. Little does Angelique understand the depth of Barnabas's fury....

This edition of Dark Shadows: Angelique's Descent has been updated by the author with an all-new final chapter.

What listeners say about Angelique's Descent

Too graphic and quite inappropriate!

I love the Dark Shadows TV series which ran from 1967-1971 in the US and which i discovered on Amazon UK Prime a couple of years ago. I have 6 of these spin-off audio books so far, many performed by the original actors from the series, (as this one is, narrated by Lara Parker who played Angelique in the series). i love the other 5 books.

This is the story of Angeliques childhood and at first I thought it was quite interesting as I liked learning her back story. However I didn't like the parts about her childhood in Martinique, there was too much sex in this story for my liking, its very graphic and Angelique is a child!! It ruined the whole story for me, made me cringe and to be honest I can't understand why the author felt the need for such an inappropriate storyline. The sex bits should be removed from the story - that's why this book is only getting one star from me! I really don't think this book should even be on sale with this kind of content!!

Where does Angelique's Descent rank among all the audiobooks you’ve listened to so far?

This is at the very top or near the top of the audios I have listened to. I've listened to a half dozen audiobooks each year for the past 20 years. My favorites would also include Fannie Flagg's Daisy Fay and the Miracle Man & Fried Green Tomatoes.

The original author (who just happened to play this character 1967-1971 on TV's Dark Shadows, and 2003-2015 in the ongoing audio series) really knows her stuff. She lives and breaths Angelique and writes of her very convincingly.

Have you listened to any of Lara Parker’s other performances before? How does this one compare?

I've heard several of her audio performances, especially the recent Bloodlust audio drama, in which she was one of a dozen performers. 10 years or so ago she did an abridged Version of Angelique's Descent which had wonderful sound effects and another actor in some scenes. But this is an unabridged book, so every delicious word is here. It's an adventure story, so it's one part vacation around the world, and one part immersion into the best of the beloved soap opera.

It's too long to listen to in one sitting. It can be listened to for a couple of hours a day and be finished in about a week.

I read the book when this came out, but had forgotten how sexy it was. I enjoyed it immensely. It's a true benchmark.

By contrast, I'm reading and loving Harper Lee's new book. It's truly a sequel for the lives of well loved characters -- and it's not a ripoff, because it was written first. So nothing that might happen at the end of the book (even if Scout ends up murdering her father) -- nothing can spoil the fact we have an important, enjoyable new sequel. After I'd read about five chapters, I discovered Audible's audio version which I downloaded. I hate to say it, but after listening to the first 10 chapters of Go Set a Watchman, I'm stopping and going back to the book. I always thought that actress was so good. Aside from her accent being okay, I'm just sad that her reading isn't on a par with Ms. Parker's. I'll listen to the rest of the Go Set a Watchman audio on an upcoming trip, but I want to read the real book first.

What made the experience of listening to Angelique's Descent the most enjoyable?

It was such a treat listening to this book narrated as well as written by the amazing actress that brought the character to life in the original Dark Shadows!

It was so interesting hearing Angelique's "side of the story". We see how she was drawn to to the things she did.

Have you listened to any of Lara Parker’s other performances before? How does this one compare?

I have listened to her performances on the Dark Shadows audio plays by Big Finish productions. Her performances are always so vivid and beautifully performed. I am always instantly drawn into her work.

I was particularly moved when Angelique discovered that Andre DuPres was actually her father and Josette and she were really half sisters.

I have been a Dark Shadows fan most of my life. It is reassuring that Lara Parker is so devoted to her fans that she wrote and continues to write these books so that we fans have a continuing tie to what has been an important part of our lives. Hearing her voice bring these characters to life is so exciting. Her characterizations are so entertaining and diverse the you are always kept involved in the story.

I found this audiobook to be really good specially written by someone who was on the show and knew her character and reading the book herself. very interesting, she brought the characters to life, made me feel like I was there.

This book blew me away. The descriptive verse was like a guided meditation at times. .If you are a fan of Dark Shadows you will love it.This book is so good I think it could be read and enjoyed by anyone. Lara Parker is fantastic as a narrator.(However,hearing her speak in her natural voice rather than her “Angelique” one was a bit strange. ).

What's not to love?

Lara Parker telling Angelique's story is the perfect way to begin a new journey into the Dark Shadows universe.

Just loved this book. We finally get to see how Barnabas and she knew each other. And her childhood was quite intriguing. A must for any Dark Shadows fan!

I loved the bood and Lara reading it was wonderful. Even tho I new all the story lines I was held.