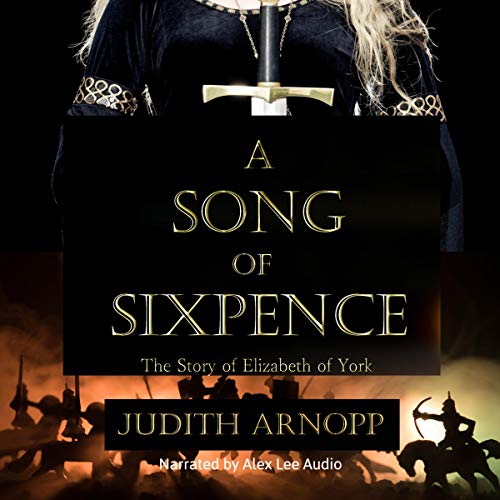 A Song of Sixpence

In the years after Bosworth, a small boy is ripped from his rightful place as future king of England. Years later, when he reappears to take back his throne, his sister, Elizabeth, now queen to the invading king, Henry Tudor, is torn between family loyalty and duty.

As the final struggle between the houses of York and Lancaster is played out, Elizabeth is torn by conflicting loyalty, terror, and unexpected love.

Set at the court of Henry VII, A Song of Sixpence offers a new perspective on the early years of Tudor rule. Elizabeth of York, often viewed as a meek and uninspiring queen, emerges as a resilient woman whose strengths lie in endurance rather than resistance.

What listeners say about A Song of Sixpence

A fascinating insight into the world of the Tudors

A great story well told and beautifully narrated. A well researched and fascinating insight into the lives of Henry 7th and Elizabeth of York and the probable fate of the two York Princes. Thoroughly enjoyed it thank you.

Ticked all the boxes for me !

A fascinating glimpse into the early Tudor court and Elizabeth of York’s struggles as she is torn between love, loyalty and duty. The combination of Judith Arnopp’s writing and the voice, acting and narration skills of Alex Lee made this a really enjoyable listening experience. I will be checking out other books narrated by Alex Lee, who has now been added to my personal list of favourite narrators. Would thoroughly recommend this to anyone who enjoys good historical fiction.

The worse narration I've ever heard. I could only put up with it for 1 chapter

The Narration was great, kept my interest, and even had me crying.This is 1 of my new fav’s now. VERY well done and I look forward to reading other books by this author.