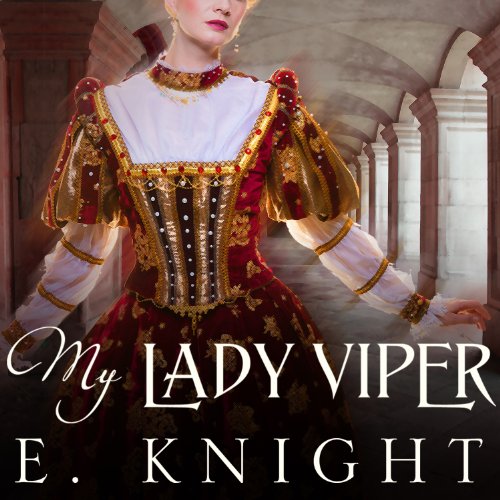 Lady Anne Seymour knows that her family hangs by a thread. If her sister-in-law Jane Seymour cannot give the King a son, she will be executed or set aside, and her family with her. Anne throws herself into the deadly and intoxicating intrigue of the Tudor court, determined to pay any price to see the new queen's marriage succeed and the Seymour family elevated to supreme power. But Anne's machinations will earn her a reputation as a viper, and she must decide if her family's rise is worth the loss of her own soul. Contains mature themes.

What listeners say about My Lady Viper

What did you like most about My Lady Viper?

I think I much prefered reading The Lady Viper as it allowed me to create my own characters just as I viewed them and I thoroughly enjoyed the book. Then I had the opportunity to listen to the book which, is not quite working for me.

This is a complex story about a woman living in a terrifing mans world of power, wonder and lust. She is treated by everyone more like a product of there foul ambition than a human being. She has to be all things to all people and she is not even the queen, just a Lady at Court fighting for her own position in the Tudor jungle.

I am sorry, but the Viper flits from one scene of lusting with her husband to lusting with what ever man is at her side, that nothing particularly stands out other than the start of fhe book at the Be Heading of Anne Boylen.

A Woman of Misery

I am only at chapter nine and I feel I am dragging myself up and down mount Everest, the story is lagging so much. I am bored of the repativeness of the story which I did not nituce when I read the book. The narrator is nothing outstanding but not too bad either, but the book needs to have it spoken with a little nore JutzPa ! I think this is an audible I will need to keep going back to once I have finished listening to something more enjoyable. I prefer reading the book myself.

I confess I did not finish this book as I grew increasingly exasperated and bored as I listened and the character kept bringing up and discussing the same few topics over and over. The narrator was ok, however I found her intonations and the stressors she choose to insert to be a distraction and not necessarily what the author intended.

What did you love best about My Lady Viper?

I'm guessing that if you're reading this review, you've already read a lot of Tudor-era historical fiction. What's great about "My Lady Viper" is that the point of view is refreshing and new. If you're like me, you've probably read/listened to a large amount of books that focus on Henry VIII, Anne Boleyn, Elizabeth I, Mary I, Catherine Parr, Catherine of Aragon, Catherine Howard, and Thomas More. If Anne Stanhope was a character in one or more of those books, she was probably portrayed as a scheming and contemptible villain. This book portrays Anne Seymour with more sympathy without taking away the intrigue and scheming that makes her story interesting, and it also goes into more detail regarding Queen Jane Seymour than other novels about the wives of Henry VIII.

Anne Seymour was my favorite because I like complicated and intelligent female protagonists who aren't paragons of virtue and selflessness. Isn't that why we can't get enough of Anne Boleyn?

Which character – as performed by Corrie James – was your favorite?

Two parts surprised me in particular. The first was the author's portrayal of Anne's feelings about the execution of Catherine Howard, and the second was the brief moment where Anne wishes that she and Catherine Parr were able to form a powerful political alliance. I don't know if the real Anne Seymour ever entertained thoughts of a better relationship with her future sister-in-law and rival for formal precedence or not, but it's believable that an intelligent politician like Anne would see the benefits of working with the Queen.

If you're brand new to Tudor-era historical fiction, you should probably read/listen to novels or nonfiction about Henry VIII and his more famous contemporaries first. I do not know if I'd fully appreciate the book if I'd read it before reading a great deal about the world of Henry VIII, Anne Boleyn's rise and fall, and the life of Catherine Parr in particular. Some knowledge of Henry VIII's character and desperation for a male heir, Anne Boleyn's demise, and Catherine Parr's unfavorable opinion of Anne Seymour made this book all the more intriguing, and I'm not certain I'd have understood the importance of certain events nor recognized the importance of the characters in "My Lady Viper" had I lacked that familiarity.

I am eagerly awaiting the next book in this series.

I am totally obsessed with the tudor court, and love to hear for all different sides so this was refreshing!

T Thought this was to be history.

Did not finish this book. Unable to sort fact from fiction and have little need for sex.. Just the historical facts, please.

I really enjoyed this audiobook. Although I don't think I would have made it through reading the actual book, the audiobook kept me hooked.

For me, it was a Warm read because neither story or characters were sustainable. Way too many yo-yo moments. There was a point where I thought, "ok, here we go", you know what I mean....you sink back, deep breath, hold on...this story is about to go nuclear! But it fizzled. I really love the Tudor era and can't wait to read other sides to their story, tragic or heroic. The parts I didn't like kinda outweighed the ones I did, so overall for me, a bit of a let down, but not all bad.

I found the book very entertaining

I found the book very entertaining. I listened to the book while at work, made my day fly by.

Loved it, new twist to and older part of history. Very well done looking forward to the next book in the series.