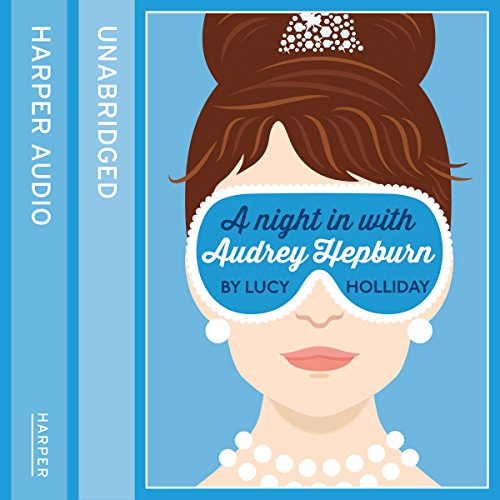 A Night in with Audrey Hepburn

By: Lucy Holliday
Narrated by: Anna Parker-Naples
Try for £0.00

The hilarious and heartwarming debut from your new favourite author, Lucy Holliday. The perfect LOL read for fans of Paige Toon and Lucy Diamond.

Unlucky in love, failed actress Libby Lomax has retreated into the world of classic movies, where the immortal lives of the screen goddesses offer so much more in the way of romance than her own life.

After a terrible day on the set of a cult TV sci-fi series where she has proved herself to be the antithesis of feminine poise and embarrassed herself in front of heartthrob actor Dillon O'Hara, she plonks herself down in front of her trillionth viewing of Breakfast at Tiffany's.

Relaxing on her battered old couch salvaged from the props department by her best friend, Olly, Libby is gobsmacked to find actual screen icon Audrey Hepburn sitting beside her. Dressed in her little black dress, wearing her trademark sunglasses, Audrey proffers advice to the hapless Libby between ladylike puffs on her vintage cigarette holder.

And so Audrey becomes Libby's confidante and friend - but has Libby got what it takes to turn her life from a turkey to a blockbuster? With a little bit of Audrey Hepburn magic, she might just pull it off....

A Night in with Audrey Hepburn is the first in a series of three books following the life and loves of Libby Lomax as she blossoms from Z-lister to A-lister and all of the stages in between with a little bit of help from some very special friends.

"I laughed my slippers off!" (Alexandra Brown)

What listeners say about A Night in with Audrey Hepburn

Such a unique way of presenting a story. Thoroughly enjoyed this from start to finish.

A very light-hearted and entertaining story. I laughed out loud a number of times.

There is a wee bit of bad language.

Perfect listing for a night in on your own

Would you consider the audio edition of A Night in with Audrey Hepburn to be better than the print version?

Its marvelous to listen to a audio version of this book as you can just lay back and listen as the very talented and marvelous Ann Parker Naples brings all the characters and the story alive.

The thing that i liked best about this story, is that the protagonist Libby Lomax is such a normal sounding ordinary woman who is flung into an extraordinary of meeting the ghost of Hollywood screen actress Audrey Hepburn.
We start the story off when Libby is much younger and she meets her two future best friends while auditioning along with her sister. Libbys sister is a bit of a difficult personality, and along with her mother and estranged father, you feel glad that Libby has such good friends.
This story has many LOL parts to it, and if you like Bridget Jones you will love this story as it has a similar vibe to it.

This is a great and cleverly crafted story, the scene I enjoyed the most was the one were Libby accidentally sets her costume and half of her hair on fire, while trying to impress a hunky actor by smoking. He then forever refers to her as fire girl and takes more than a passing interest in her.

Great story and Anna magical narration gave me many happy hours of listing. I recomend this book five stars