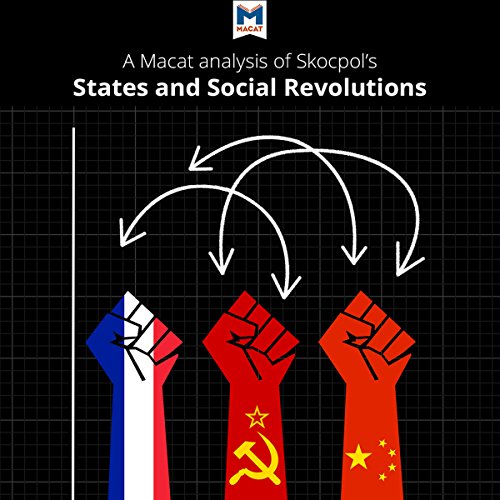 A Macat Analysis of Theda Skocpol's States and Social Revolutions: A Comparative Analysis of France, Russia, and China

The modern world has been marked by a series of immense social revolutions that have transformed the states where they happened. In 1979, American sociologist Theda Skocpol published States and Social Revolutions and examined three of these uprisings: in France at the end of the 18th century, then in Russia and in China in the first half of the 20th century. She pinpointed a number of common factors that affected each of these countries at the time revolution happened. The most important was the external threats that forced all three countries to modernize both suddenly and violently. This in turn caused cracks in the relationship between the state and the country's elites, giving peasants the chance to develop and push their revolutionary fervor. The disorder that followed plunged the states into chaos, before they emerged again as wholly new societies. Skocpol's intention was never to produce an overarching explanation as to why revolutions occur. Rather she wanted to look for the basic conditions that make such dramatic upheaval possible.

What listeners say about A Macat Analysis of Theda Skocpol's States and Social Revolutions: A Comparative Analysis of France, Russia, and China

This is a decent summary of the impact of the book and subsequent developments in the field, but didn't provide enough summary and analysis of the actual content of the book, which is what I was looking for.

Good overview of how Skocpols work influenced research methods, solid comparison between her work and others but not a great deal of content analysis. if you happen to be a student trying to find a summary, instead of reading the book, look elsewhere.