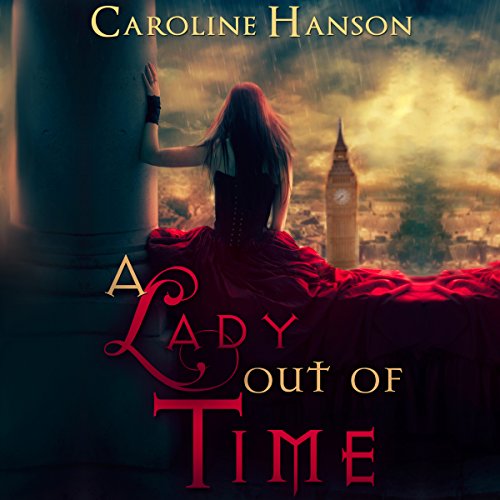 A Lady out of Time

By: Caroline Hanson
Narrated by: Emily Woo Zeller
Try for £0.00

Sent back in time to Victorian England to stop the invention of a deadly weapon, Helen Foster knows the job looks too easy: All she has to do is go to an auction, buy the weapon plans, and destroy them, and she'll save millions of people back in her own time. And even if she spends the rest of her life as a spinster stuck in the English countryside with a plethora of cats, changing the future is worth it.

Then she meets Edward Clifton, duke of Somervale, the man she's supposed to blackmail. He is one of the most powerful men in the land, so handsome and cold that debutantes have been known to faint in his presence. After one meeting, Helen will be thrilled to never see his royal (and quite spectacular) backside, ever again.

But as her mission falls apart and danger closes in, Helen has no choice but to turn to the one man powerful enough to help her not just change the future, but survive the night.

This is the first of two books in Helen's series. Please be aware that the swearing is pervasive, the sexual tension blistering, and the historical details have not been taken too seriously.

What listeners say about A Lady out of Time

didn't know what to expect but this turned out to be quite interesting. it's about time travel. a bit of romance,suspense, and espionage in a way. Didn't really like the ending because it makes you having to get the second part ( which I have done already) to find out what happened. Good narrator and amusing in parts. overall worth reading. I enjoyed it.

A great start to the series.

What did you like most about A Lady out of Time?

This was a very entertaining read. It has humour, romance and a little bit of suspense. Can't wait to listen to more.

I liked the Duke. He is a likeable and well rounded character. I liked the banter between him and Helen.

The way the story ended was quite moving. It didn't end quite the way I was hoping but it sets the scene for more adventures and romance.

Well.... that was different!

Let's see.... its the year 2082, The world is still fighting Nazi occupied Europe, Helen is a genetically altered soldier. ...( modified thru experiments meant to keep up with the germans.... can't let them to be the first to discover something, right?) She is the singular person who can travel thru time and live. Thus she ends up in London in the 1800's and with (can you guess?) a duke! So that she can prevent plans for a super weapon from falling into the hands of the germans. And if you can get past all of that then you have a fairly transparent plot that is delivered to you with a pause half way through so that you need to buy the second installment to get to the conclusion of the story. ( hopefully!)
That said.... it was done well enough that I will listen to book two. I mean.... how much more bizarre can it get before the happy ever after arrives, right? (knock on wood, salt over my shoulder, fingers crossed (you'll understand...).)

HEAT FACTOR; Scorching without being pornographic or erotica.

A lady Out of Time

I loved the audio version of a Lady out of time. It was just too short. I think Emily Woo Zeller's narration was on point . She made the story come alive. Also, she does the best male voice I have heard from audible. Some of the narrator's have voices that sound like nails on a chalkboard.😨 I have an audiblebook I can't listen to due to the narrator's voice, especially when she reads in the male voice. Well, that's money I can't get back. I give this audiblebook five stars. The writer wrote an enjoyable story that was read by a great narrator.

This was a very good story. I just loved Edward and Helen, and Mary, too. This was about Helen, a soldier from the year 2089 who was sent back to 1854 to stop the Nazis from conquering the world. It was exciting all the way through.

There was no sex but there was an amazing amount of desire coming from Edward and Helen, it was fantastic. For those of you who like to read about the feelings that come before the sex this story is for you. I always said that Samantha Holt was best at writing about desire/sexual tension but Caroline Hanson can now give Ms. Holt a run for her money.

As to the narrator: Emily Woo Zeller did a truly fantastic job. Whether it was Helen’s crazy thoughts of desire, or arguing with herself or of Edward’s sexy voice, or the emotions that should come with the readers, she did an incredible job.

My only problem with this book is that it only had 185 pages and it was a CLIFFHANGER and the next book is 129 pages. So, instead of just writing one whole book she left it WITHOUT a HEA and without a real ending. I will NOT be reading the second book because I WILL NOT pay $5.00 for 129 pages. I hate publishers/authors who do that crap.

nazis in Victorian time while being a proper lady

solider of the future goes nazi hunting while trying to be a proper lady. Hot dukes

Fun story, narration was easy to listen to. Nothing like a bad narrator for audio recordings but this one was very pleasant.

the author has found a balance allowing the female character to have a purpose aside from romance other authors often lack. Romance is a major theme in the storyline, but it actually contributes to the complexity of the character. the authors choice of words paints a picture of the time. details are carefully chosen, and allow the reader to smell, touch, and see the environment.