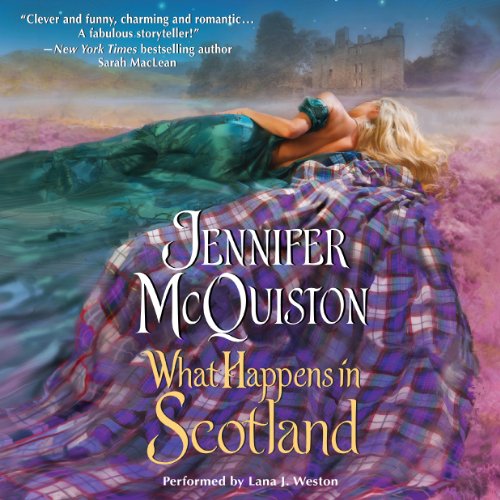 What Happens in Scotland

By: Jennifer McQuiston
Narrated by: Lana J. Weston
Try for £0.00

She woke up married

When Lady Georgette Thorold awoke she saw...her corset hanging from the armoire...a very handsome, very naked Scotsman lying beside her...and a wedding ring on her finger! Before the attractive stranger can tell her his name, Georgette does the only sensible thing - she runs for it.

Little does she know, James MacKenzie isn't clear on what happened the night before, either. All he knows is that his money is missing and the stunning woman who just ran from the room is either his wife or a thief...or possibly both.

What happens in Scotland when two complete strangers fall madly, deeply in love?

What listeners say about What Happens in Scotland

What happens in Scotland... should stay there.

I've had this book on my to-listen list for quite a while, but have put it off. I have previously listened to another McQuiston book 'Diary of an Accidental Wallflower' which had quite an unlikeable heroine, and did not incite me to seek any other of her books. However, I liked the premise of 'What happens in Scotland' so eventually gave it a listen.

I almost turned it off and returned the book within the first five minutes of listening. Mispronunciation of words such as 'penchant', 'dishabille', and most unforgivably, 'ton' as 'tone' had me wondering if anyone ever listens to these tihngs before they are sold to the public. Added to that the frankly awful voicing of James, and I was certain that this title was destined to languish on the Did Not Finish list. I decided to try to ignore these glaring problems, and soon found it surprisingly easy to keep listening.

The structure of this book is very different to most in the genre. The whole book takes place during a single (extremely eventful) day. Aside from the first five minutes, Georgette and James spend the first half of the book apart. Unfortunately, I enjoyed that time much more than when they do eventually come together again.

I quite liked Georgette, she is intelligent, resourceful, and with a dark sense of humour. James on the other hand is irritating in the extreme. We are given reason from his past as to why he is so distrustful and wilfully independent. I would have had more sympathy for James if he had expressed that this attitude was a regrettable result of his past experiences. But he has almost no self awareness, and doesn't appreciate how much his behaviour has hurt his parents, his brother, his best friend and now Georgette. He comes across as juvenile, petulant and resentful.

He throws accusation after accusation at Georgette, and demands hard evidence of her innocence before he will believe her. His training as a solicitor is cited as reason for this. This ignores one of the basic tenets of the law, that it is not for the accused to prove their innocence, but for their accusers to prove their guilt. At one point he tells Georgette that he loves her, but does not trust her. This clearly shows that the man is immature, and does not understand what love is. There is no love without trust, only some warped power game.

Georgette's response to James' behaviour just doesn't ring true. Her interactions with other characters are funny, quick witted and no-nonsense. With James she is constantly understanding why he might be distrustful of her, rather than raking him down as he rightly deserves, Considering the trials of her first marriage, the last thing she needs is an insecure, emotionally demanding second husband who feels her money is a threat to his masculinity, and will accuse her of wrongdoing anytime anything goes wrong. James and Georgette seem to bring out the worst in each other, he becomes angry and suspicious, she a doormat. I just can't see that a happily ever after is on the cards for these two.

As to Lana Weston's narration... I have already mentioned the glaring issues I had with the narration that almost had me switching off. I will say that on further listening, Weston's female voices are very good. She reads in an entertaining way, and her comic timing is excellent. Her male voices however, are just terrible. Somehow she reads the men's voices in a higher pitch than her normal speaking voice. Add to that her idea of a Scot's accent, and the result is rather whiny and irritating. This wasn't too much a disaster for a beta male like James, but would not do for a big strapping Scotsman.

One other important thing you should know about this book is that there is a character called DAVID CAMERON. Yep. They don't just call him David or Cameron, he is full-named all the way through the book. In this book, he is not a nice character (so not the greatest stretch in the world), but he is the HERO of the next book in this series, 'Summer is for Lovers'. A review of that book says that he is full-named 55 times throughout. I'm not sure I'd be able to ignore that.

I finished this book in two days, and it is good for a bit of light listening. However, there are many better books for that.

Well read and different from the usual historical romance. The ending was predictable but still enjoyable getting there. I will be looking out for her next book, and the next book narrated by Lana J. Weston.

I really wasn't impressed by this audiobook. It was just soooo slow. Just to give you an idea the whole story takes place in a 24 hour timeframe and this book is over 10 hours long. The first 5 hours of the story is just Georgette and James looking for each other after a night of drunken madness. Somehow by the magic of storytelling they manage to marry and fall in love within just one day. I really have issues with a story where I Love yous are exchanged within 24 hours. It's just not believable. At least the narrator was very good and I really liked her Scottish accent.

The first of the book dragged on and on ... I was at the point of putting it down as unreadable. I'm glad I didn't because the second half was worth hearing.

What could Jennifer McQuiston have done to make this a more enjoyable book for you?

She could cut down the H/H rushing around trying to find each other ... all the while dragging the book down as to what occurred the night before .... way way too long on that aspect of the story IMO.

Which character – as performed by Lana J. Weston – was your favorite?

The hero, James, was my favorite. Even when he was hateful ... I liked him. The narrator did a good job ... even with the extensive dragging parts of the story.

Was What Happens in Scotland worth the listening time?

As I mentioned before, only half of it was worth the listen. That is why the rating is so low from me. The last half was actually a 3.5 out of 5 stars for me .... the beginning half was a -2 star if that were possible here.

Knowing what I do now, and even enjoying the second half, I would not have missed not reading this book. Perhaps it is your cup of tea throughout ... everyone has different tastes after all.

Right from Chapter 1 this totally implausible and unrealistic listen set in 1842 drew me into a madcap, lighthearted, enjoyable and entertaining world where Georgette (suffering from total amnesia) woke up in tangled sheets next to a bare man and promptly ran out on him but James too later woke up and remembered nothing. As they separately tried to piece together the events that led them to a wedding ring and a trashed room (but for very different reasons), I found myself saying "oh, just one more Chapter" until the very end which was around 3.30 am (divorce papers now pending!!).

They slowly stumble across clues, whilst retracing their steps in the hope of finding each other and unravelling the truth, along the way they encounter some entertaining richly portrayed characters, adventure, fun, danger, family misunderstandings, regrets, attempted murder, passion, desire and love. As the storyline frantically twists and turns they each develop a totally misguided idea of one another and when they finally meet it's hard for them to trust one another but the mutual attraction is definitely there.

Worth a credit? YES a real fun listen set in a 24 hr time period and pure escapism at it's absolute best. A new author but I'll definitely be looking out for more of her books in the future.

An Interesting different spin on a”Historical Romance “.A nice change,but you need to remind yourself that it is a Historical Romance,you almost expect someone to whip out a cellphone to make things easier.Fun and entertaining,narration was good.The only downside to the story is the first many chapters don’t involve the two main characters together,it was miss and miss again...A bit frustrating.

This is one of my favorite romances I've listened to. The story was fun, both characters were strong (I'm not a fan of romances with helpless virginal females and rich men who think no means yes), and the reader had a nice and expressive voice. Although some things in the plot were slightly implausible, the plot moved quickly and stayed interesting. The sex scenes were racy but not too graphic, and they actually made sense with the story. I look forward to more books by this author/reader combo!

I loved this book. the narrator was great. the story was intriguing and interesting. definitely a good read.

This is the worst story ever! I had such great expectations but the main characters especially the female character ruined it. This horrible story and ridiculous characters made me so angry, I couldn’t listen anymore.

This was a good read/listen. It was fun. I do wish there had been more dialogue in the book. There was not enough of that. The hero and heroine were both strong characters. The heroine was not whiny or wimpy, she was very likable. Loved the maid Elise, she was funny. There was no hot and steamy sex to speak of until the very end and it was not extreme but that was okay.

The narrator did a decent job, however, she could have made the men's voices sound a little more like men. If she does that in the future she will be a great narrator. Her reading voice was excellent.