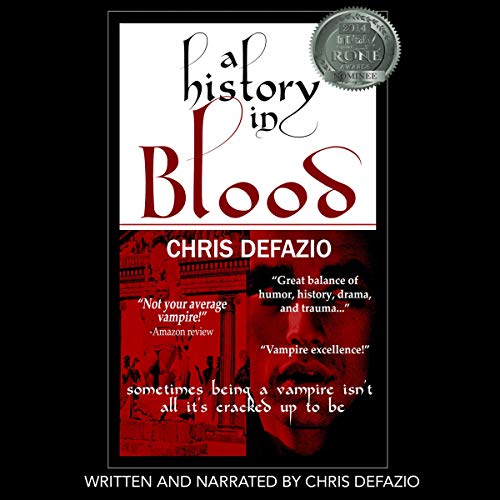 A History in Blood

By: Chris DeFazio
Narrated by: chris defazio
Try for £0.00

Sometimes being a vampire isn’t all it’s cracked up to be. Julian Brownell, a 2,000-year-old vampire, is learning that the hard way. The depression and divorce in his banal, pretend-human life were bad enough. But when he decides to burst back onto the vampire scene, things go from bad to worse as he finds himself firmly in the sights of the deadliest vampire hunter of all time.

A History in Blood depicts a world where vampire culture and politics reside peacefully beside the world aboveground, a world where vampires don’t adhere to the erroneous traditional lore. Stakes to the heart cannot kill them - only fire or decapitation. Although popular opinion suggests that garlic and sunlight are fatal to them, in truth, these are more like allergies that affect them to varying degrees. Against this backdrop, and with a healthy dose of humor, the story follows Titus Acilius (aka Julian Brownell, aka Christian Beauparlant, aka Texas Jack, aka any number of alternate identities) on his journey to protect the people he loves from harm even as he searches for the answers to his ancient-life crisis.

What listeners say about A History in Blood