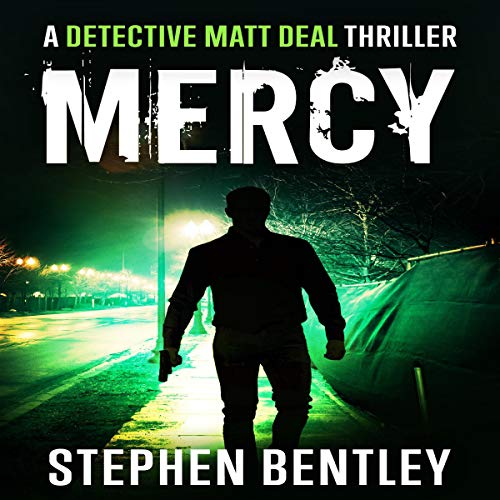 His daughter was taken. He’ll never get her back.

Set in the near future, Matt Deal is a British businessman married into a wealthy Florida family. Mercy, his 15-year-old daughter, is the glue in his rocky marriage to Lorey. His life is changed forever after Mercy is brutally sexually assaulted on a Destin beach, leaving her in a persistent vegetative state.

Trusting the local detectives to bring the rapists to justice, mixed martial arts expert Deal concentrates in vain on his Florida gym business, only to have his world further explode on learning the men responsible for his daughter’s injuries may escape justice.

Deal is isolated and at his wit's end after his rich father-in-law sends death threats blaming him for all these ills.

Who can he turn to? Where can he go? What will he do? Who can he trust? Will he return to a post-Brexit Britain or will he, ultimately, seek revenge?

Fans of Jack Reacher, Barry Eisler, and any vigilante justice novel will love this book.

Trigger warning: Adult content. The story contains a scene of sexual violence and some scenes of explicit consensual adult sex.

What listeners say about Mercy

An excellent revenge thriller. Set in the near future, when Matt's daughter is viciously attacked he swears vengeance. The story shifts between an England ravaged with strife and crime and Florida. There is a quite a graphic start to the book and violence throughout, the story is very well written with great strong characters and a gritty style. The narrator is fine and is easy to listen too but all the voices are American even when in England.
I Received a Complimentary copy from Storyorigin and am leaving a honest voluntary review

I can't wait for more

What a great audiobook! I really like this genre and I found Mercy really enjoyable. Really well written and performed. I appreciated the reference to potential ramifications of certain real life political decisions. I will be starting on the next book in the series tomorrow and I very much look forward to it

This is a wild ride of a novel, not for the squeamish or narrow minded. Matt Deal must battle through personal tragedy to seek revenge on the people who raped and left his daughter, Mercy, in a vegetative state and yet they avoided justice. The action jumps countries keeping the readers adrenaline pumping through to the final chapter. A hot thriller.

I had read Mercy a while back on my kindle and I totally enjoyed it. When I saw it available as an audiobook I snapped it up thank's to Stephen's generosity again. I have read a few to several of Stephen's books, and enjoyed them all, and this audiobook is no exception. I am not going to spill the beans with spoilers, you are just going to have to get the books yourself, I am sure you will enjoy them. I was provided this audiobook for free from Stephen and Story Origin, and this is my voluntary unbiased review.

A thriller to the end and beyond. Matt Deal is seeking revenge for his daughter's rape and destruction. Great plot. Great characters. Great action. Well written. Looking forward to more of these characters.
I listened to Audible version and was sometimes lost with so many different characters. But once sorted out it was very entertaining.
I voluntarily reviewed a complimentary copy of this book from Story Origin.

Stephen Bentley wrote a futuristic crime thriller whose protagonist's name is Matt Deal. The opening pages depicted a brutal assault upon Matt's teenage daughter that left her in a permanent vegetative state. The assault, the fact that the perpetrators might be allowed to go free, Matt's wife, and his father-in-law all conspire to make Matt change his life dramatically. This story is raw, gritty, visceral, and has some descriptive sex scenes. It is suspenseful and fast paced, and I recommend it to others who like this genre. Chris Defazio's narration is great. I was given a free copy of the audiobook and I have voluntarily left this review.

A well-written story from a good author

Mercy: Detective Matt Deal Thrillers, Book 1, my first highly enjoyable read from author Stephen Bentley, An author I'd not heard of before getting the opportunity to read & review this book.! December seemed to be my month for new authors, January continued the trend, and now February. A well written, entertaining read, with intriguing, well-developed characters. A bit slow to start but when it took off I couldn't turn pages fast enough. Chris Defazio"s outstanding narration added greatly to a good book's enjoyment. “I received a free review copy of this book and am voluntarily leaving a review." I look forward to reading more from this author. (RIP Marley January 20, 2014 - July 24, 2018).

Interesting read. In Mercy, Matt Deal's life is changed forever when he essentially losses his fifteen year old daughter who is brutally assaulted and left for dead on the beach, her assailants walking free. What will Matt do now that his world has fallen apart: run or seek revenge??? Find out in Mercy.

Matt Deal is a father with good reason for wanting revenge, his 15-year-old daughter (Mercy) was assaulted by a group of college students. The attack left Mercy in a coma with no sign of recovery and the assailants family money and influence had allowed them to walk free without conviction. Matt and his girlfriend Wolfie are determined to serve up the missing justice. The storyline was good, but the narration was too slow for me, listening to the audiobook at 1.3x to 1.5x speed did help somewhat. Matt Deal is a British citizen but the narrator did not even attempt to provide even a hint of a British accent. I received this audiobook from the author at my request and have voluntarily left this review.

I received an offer of a review copy of the Mercy audiobook through StoryOrigin and after reading in the title it was a Detective thriller I jumped on the opportunity. This story takes off right out of the gate with some very intense action that readers who prefer “clean” thrillers may find offensive or off-putting. So for anyone reading this review if you prefer not to read thrillers with adult subject matter maybe you are better off looking elsewhere, however if it’s not an issue for you, the intense action in this story starts right off the bat and stays on the same pace throughout the story. I honestly could see this as a Jason Statham movie. The dialogue throughout the story reminded me of old school detective stories which brought back a feeling of nostalgia. The only issue I had with the audiobook was the narration – Matt Deal and several other characters are British, sadly there was no British accent in the narration – and this really would have made this audiobook more enjoyable.

I couldn't finish it just 2 much sex and swearing

as I said I just couldn't take all the sex, sex talk and swearing. I wanted to find out what happened with Matt's daughter Mercy after how the book started but I just couldn't do it. if this is what all this author's books are like I guess I won't be reading or listening to any more

The story was very exciting. Once I started I did not want to stop. What a terrible thing to happen to Mercy. I knew her dad would win in the end. Excellent characters. Some of them you like & some you hate. My only issues were a little to much sex for me and I did not really care for the narrator. I recommend the book. A new author for me and I will be reading more of his books.

I could not read past chapter 6. I tried to like this book. This is the first book in hundreds of books that I just had to walk away from.

Can you judge a book in 6 chapters? Let's see:
1) Explicit crime with "juvenile acting" perpetrators
2) F bombs galore that don't add to the story.
3) Narrator doesn't help things. He sounds like a pre-teen practicing the f bomb. He reads the story too upbeat. It doesn't match the seriousness of the action.
4) Grandiose gestures that would never happen in reality.

I could go on. This author needs a writing coach...badly.