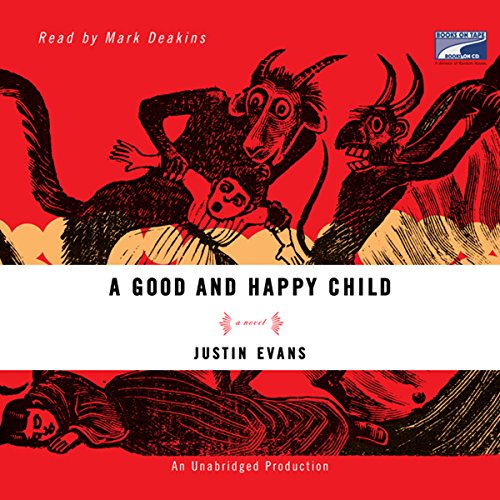 A Good and Happy Child

A Good and Happy Child

Thirty-year-old George Davies can't bring himself to hold his newborn son. After months of accepting his lame excuses and strange behavior, his wife demands that he see a therapist, and George, desperate to save his unraveling marriage and redeem himself as a father and husband, reluctantly agrees.

As he delves into his childhood memories, he begins to recall things he hasn't thought of in 20 years. The odd, rambling letters his father sent home before he died. The jovial mother who started dating too soon after his father's death. A boy who appeared one night when George was lonely, then told him secrets he didn't want to know. How no one believed this new friend was real and that he was responsible for the bad things that were happening.

Terrified by all that he has forgotten, George struggles to remember what really happened in the months following his father's death. And when a mysterious murder is revealed, remembering the past becomes the only way George can protect himself and his young family.

A psychological thriller in the tradition of Donna Tartt's The Secret History, with shades of The Exorcist, the smart and suspenseful A Good and Happy Child leaves you questioning the things you remember and frightened of the things you've forgotten.

"This is an edgy, compelling read, more unnerving than scary, that will slide its hooks deep inside and throttle you more than a few times before it's all over." (Booklist)
"This stunning novel marks the debut of a serious talent....Evans subtly evokes terror and anxiety with effective understatement. The intelligence and humanity of this thriller should help launch it onto bestseller lists." (Publishers Weekly)

This might be the only book I've given 5 stars -- and i've been an Audible member for something like four years and have listened to many, many books. This one is un-put-down-able.

The story is riveting and the author is a great talent. Mr. Evans, please keep writing! Can't wait for your next work.

Mark Deakins: Hands-down the best narrator I've had the pleasure of hearing. We need more of you! In fact I'll go seek out anything else you have narrated when I finish this review.

The ending felt slightly rushed and wasn't as satisfying as I had hoped for but left me thinking long afterward. So I guess that's a good thing.

A Bored and Unhappy Listener

There were some mildly interesting and creepy parts, even some moving bits toward the end, but not worth the long listen.

Justin's superb mastery of language weaves a story that moves you to carefully listen to every eloquent word as you find yourself engrossed in the story. Bravo to the theater of the mind the author has created.

What made the experience of listening to A Good and Happy Child the most enjoyable?

The great character development and the authors talent. I was able to sympathize with the protagonist because the author was able to write so well from this point of view.

What other book might you compare A Good and Happy Child to and why?

What does Mark Deakins bring to the story that you wouldn’t experience if you just read the book?

His ability to portray and transition from one character to the next was incredible.

The moments where the protagonist is unaware of the damage he has done.

The ending was not stellar but I enjoyed the book.

This book was creepy and sad at the same time. Ending could have been a bit better, but all in all a captivating listen.

Loved it! Kept me on my seat!

I loved this book! It kept me engrossed the entire time. The book kept me on my toes and I l completed it in two days while I was at work. I was surprised at how much I liked it, I loved the main character George, his innocence & his strength to stand up for what he believes, even if it meant losing everything. I have to admit, this book is scary because the things that happen to this young boy, could really happen. I liked the ending.

Not a Psychological Thriller

The description of this book calls it a "psychological thriller." This is not a psychological thriller. This is more like atmospheric/psychological horror. And it is wonderful. This is the kind of horror I love--gradually building, subtle, at some points ambiguous, and it never resorts to cheap horror tropes that are everywhere these days, making good horror so awfully hard to find--there is not a lot of gore or stereotypes. This is a book with complex characters whose own motivations and issues inform the horror itself. Superbly well-done.

I actually read the physical book years ago and loved it, and so I was happy to revisit it on Audible. Mark Deakins as a narrator is fine. I wouldn't necessarily seek him out as a narrator in the future, but he did a good job with the narration. I found that I couldn't listen to this book at night--it was that scary. And again, the horror is largely subtle. There's not a lot of things jumping out, not a lot of blood and guts, nothing particularly flashy or grotesque. I get impatient with that stuff, as it tends to be predictable and not scary *because* it's so predictable. It's lazy writing.

This is not that. This is beautifully written and deep. This is a deeply human story working alongside something sinister, and that's what makes it so great and so unsettling. It alternates between the present action, where George Davies is in therapy because he can't bring himself to touch his newborn son, and George's childhood memories, which is more of a coming-of-age story centered around the great tragedy of George's life. These childhood recollections slowly, and alarmingly turn darker and darker as grown George remembers more and more. I will say that the book does get a little preachy at certain points, but I think that makes sense in context.

By the end of the book, things are not 100% clear, and that really works in this case. It's not a cliffhanger, and it doesn't make the book feel unfinished. Rather, it encourages you to keep thinking after the book is done. The description says that this has notes of The Exorcist, and I actually think it has more than that. It's easy to see how this book was directly influenced by The Exorcist, which, in my opinion, is one of the scariest books of all time. This goes up there with The Exorcist, The Haunting of Hill House, and My Best Friend's Exorcism as one of my favorite horror novels. I really wish there were more like this out there.

This is one of those books, though not at all bad, you'll forget as soon as you're done listening. The characters are a little weak and the story is sort of boring, but it's a great first attempt at a novel from the writer.

Not as good as I was expecting from reading review

When I read the review about being the first book that a person has ever given 5 starts, I had to give it a try. I guess based off the review I had GREAT expectations. Well, this left me disappointed. The book was hard to get into, starts off slow and takes awhile to get in the mode to wanting to hear how the book ends. About mid book, the story picks up and leaves you wanting to come back for more, but still not the most gripping book I have read. The story has an interesting concept, but to me would fall into the better than average group but defiantly not a masterpiece. If you have the time, I would recommend it, but I would not have the hopes of a masterpiece as I was hoping for, this will leave you disappointed with that mindset.

The advance advertising on audible sounded like this book would be a good fit for me, and the really enthusiastic review convinced me to try it. I was expecting a psychological investigation of the presenting situation, bringing in family history, work experiences, marriage(s) and relationships, all that stuff.

What I got instead was a really slow moving horror fantasy, which had absolutely no relevance to the real world, and was full of depressing and unlikeable characters.