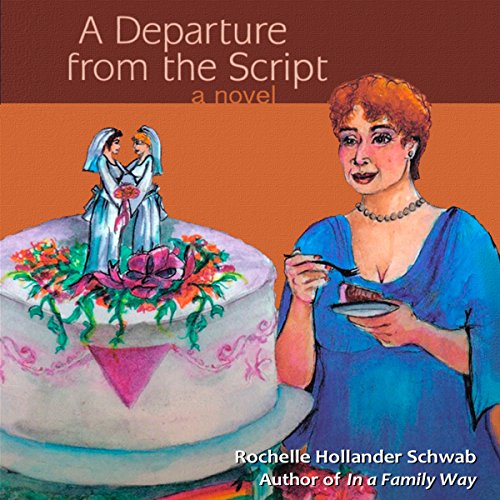 A Departure from the Script

By: Rochelle Hollander Schwab
Narrated by: Sheri Pigott
Try for £0.00

Sheila Katz has it all: a successful amateur theater debut, a husband who looks like a movie star and performs in bed like a man twenty years his junior, plus two wonderful grown children. True, her son became Catholic when he married - not a Jewish mother's dream. But Sheila is sure that any day now her daughter will announce her engagement to a wonderful Jewish boy. When the announcement comes though, there's one small change to Sheila's script. Jenny's intended is a wonderful Jewish girl.

With assistance from a support group, Sheila rises to the occasion and helps Jenny plan a blowout lesbian wedding. Even as she calls caterers, Sheila is keeping the affair secret from her disapproving spouse. But another secret disturbs her far more: She has become infatuated with a striking lesbian artist. Now Sheila is dreaming of an affair of her own, one that could alter her life forever. More than an "issues" book, this is a great read, filled with humorous twists and laugh-out-loud scenes.

Yet though Jenny and Tamara are not seeking legal recognition of their love, this groundbreaking novel may have played its part in the growing acceptance of marriage equality. A Departure from the Script was a choice of InsightOut Book Club, and a featured selection of Reading Group Choices: Selections for Lively Book Discussions; suggested discussion questions for book groups are included in the book.

What listeners say about A Departure from the Script

Where does A Departure from the Script rank among all the audiobooks you’ve listened to so far?

It ranks among my favourites.

What other book might you compare A Departure from the Script to, and why?

It's quite unique, in that it describes a mother's journey into acceptance of her lesbian daughter. It's very well written. The characters have real depth. It's funny in places - moving in others. So I can't think of any other books to compare it to.

There were loads of brilliant scenes in there. But some of the scenes with the main character's mother and mother-in-law were laugh-out-loud funny.

The narrator was superb throughout.

books that bring every word and detail that might occur if in person are books that I don't particularly enjoy. Stories don't have to get caught up in the mundane the way life happens

The story was good, real life. I like how the parental struggle was played out loud. I think the daughter's patience was a stretch but maybe saints do exist

If tightened up and shortened it would be even better. The New York accent and whine was hard to settle know at first but I learned to go with the flow

Would you consider the audio edition of A Departure from the Script to be better than the print version?

I don't think you can compare an audio experience with a textual one, neither is inherently inferior or superior to the other. I "prefer" to listen to audio (I have increasingly poor eyesight and I like being able to "read" while doing almost anything), I think in this the narrator did a spectacular job, and I would say that listening to this would definitely enhance your experience even if you have already read the book.

Have you listened to any of Sheri Pigott’s other performances before? How does this one compare?