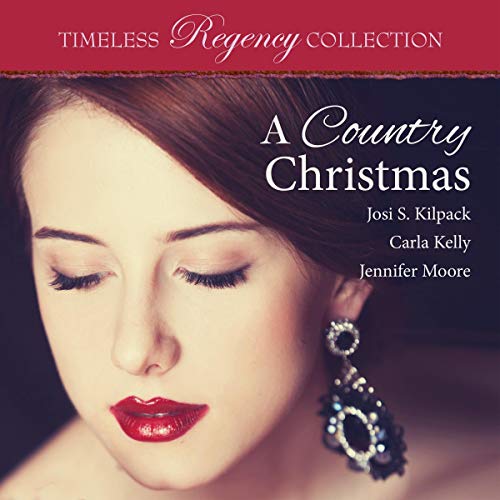 SAINTS AND SINNERS by Josi S. Kilpack. When Neville Franklin's best friend Burke wants to wager who can kiss Eloise first, Neville puts a stop to it. Eloise has been his friend since childhood, and, well, she's off-limits. Especially to Burke. As Burke pursues Eloise and claims that she has a tendre for him, Neville becomes more and more protective of the girl he grew up with. On the night of the Christmas ball when Eloise appears in a dress that clearly shows that she is no longer a girl, but a beautiful woman, Neville realizes that his protective feelings toward Eloise have turned into something greater. But now, Neville's best friend stands in his way.

THE CHRISTMAS ANGLE by Carla Kelly. Sailing Master Able Six is on half-pay with the British navy, biding his time during the uneasy Peace of Amiens and the resumption of war. Meanwhile, he's invited to teach young pupils at the home of a vicar outside of Plymouth. There, he unexpectedly meets Meridee, the spinster sister-in-law of the vicar. From the moment Able sees Meridee, he's entranced. When she asks him about his past and discovers his remarkable yet troublesome gift, he realizes he's finally found someone who can care for all of him. Sadly, Able's low station and half-pay gives him no way to provide for a wife. Meridee's lack of dowry and dependence on relatives makes their union impossible at best. But isn't Christmas a season of hope?

THE PERFECT CHRISTMAS by Jennifer Moore. Archie Clawson wants nothing more than to give Jane the perfect Christmas. Since her troubled childhood, she's not experienced a Christmas with all the trimmings. To top off the perfection, he also plans to ask her to marry him on Christmas Eve. But as he and his friends, including Jane, travel to his country home, they are caught in a snowstorm and discover that notice of their arrival did not get through to the house staff. Worried over the disappointment he must be causing Jane and the complete shift in their planned Christmas, Archie fears that he's misinterpreted her kindness towards him and lost her favor forever.

Other books in the Timeless Regency Collections:

A SEASON IN LONDON

A HOLIDAY IN BATH

FALLING FOR A DUKE

A NIGHT IN GROSVENOR SQUARE

What listeners say about A Country Christmas

WHAT IT'S ABOUT
SAINTS AND SINNERS by Josi S. Kilpack.
THE CHRISTMAS ANGLE by Carla Kelly.
THE PERFECT CHRISTMAS by Jennifer Moore.

MY TAKE
This anthology was just what I was looking for right now, with its charming cast of characters from dense Neville who discovers he's in love with his childhood friend Eloise, to brilliant Able Six the brilliant Navy man who was raised in a workhouse and fears he has nothing to offer feisty Meridee, to the anxiety-riddled Jane and Archie who sees beyond her weakness to the strong woman she could be if her loved ones would only let her.

Delightful listen! Sarah Zimmerman did a great job with the narration.

I absolutely loved the first two novellas, by Josi Kilpack and Carla Kelly. The last one, by Jennifer Moore was not as wonderful but still enjoyable. Sarah Zimmerman is great!
All in all, a great listen.

A Country Christmas collection offers novellas—Saints and Sinners by Josi Kilpack The Christmas Angel by Carla Kelly The Perfect Christmas by Jennifer Moore. The first two stories engage the reader with delightful characters and wonderful plots. The third one seemed depressing and Ibdin’t enjoy it. All are clean. Kilpack and Kelly had me at the first sentence and gives two of the best listens in a great while. Truly excellent!

great storytelling the characters were very grand and the back round and the place they ended up staying at was wonderful.

Worth listening to. Liked all three. Great way to pass some time. Josi Kilpack is a good writer. Recommend you check out her other books.