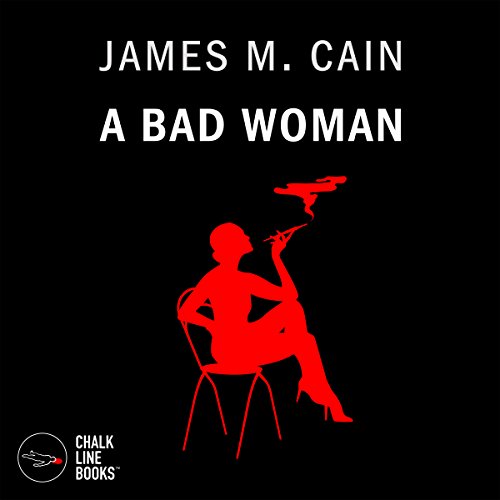 Film star Sylvia Shoreham is wowing the dusty gambling town and is hell-bent on divorcing her conniving user of a husband, a foreigner with a slick tongue and a heavy accent. But the husband has other ideas, threatening to marry Miss Shoreham's neurotic sister if she divorces him. Hollywood bigwigs want to keep the movie star making the pictures that make them millions. And then there's a gun in the room and a dead husband. Did Sylvia do it? Or was it an elaborate suicide? Everyone has a beef and a motive and an angle, and it's largely up to Sheriff Parker Lucas, the laconic lawman who keeps order in his town, to unspool the tangled web.

Told in James M. Cain's typically taut and terse prose with deadpan dialogue and bruising plot twists, it's a novel by the noir master that is often overlooked in favor of the better known The Postman Rings Twice and Double Indemnity but offers its own tantalizing tale. A Bad Woman is another fine addition to Chalk Line Books' growing roster of great vintage crime fiction.

What listeners say about A Bad Woman

Everyone thinks James M Kaine is a brilliant noir writer. And he may be that. But this book… Not so much. It’s a very dated story, with some absolutely ridiculous scenes that strain credulity. If you want an old school Hollywood tail, it’s OK. Cannot recommend.

Not bad, but I felt like the lack of serious character development hurt the story. I found my mind wondering and it didn't seem very organic.