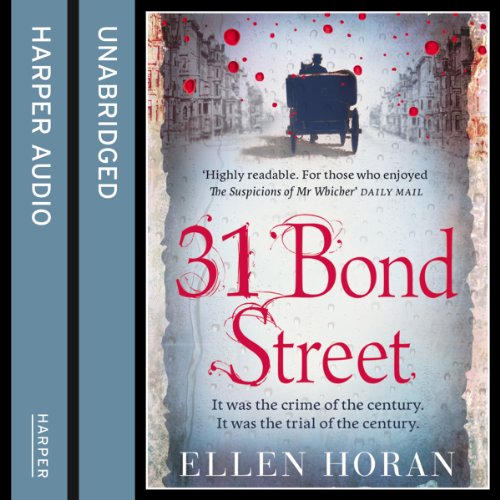 The sensational murder of Dr. Harvey Burdell in his lower Manhattan home made front-page news across the United States in 1857. "Who killed Dr. Burdell?" was a question that gripped the nation. 31 Bond Street, a debut novel by Ellen Horan, interweaves fiction with actual events in a clever historical narrative that blends romance, politics, greed and sexual intrigue in a suspenseful drama.

The story opens when an errand boy discovers Burdell's body in the bedroom of his posh Bond Street home. The novel's central characters are Dr. Harvey Burdell, a dentist and unscrupulous businessman; his lover, the ambitious, Brooklyn-born Emma Cunningham; the district attorney, Abraham Oakey Hall (later to become mayor of New York); and Henry Clinton, a prominent defence lawyer. The enigmatic relationship between Emma and Dr. Burdell makes her the prime suspect, and her trial is nothing less than sensational. Will she hang? Were her teenage daughters involved? What did the servants know? Who was the last person to see Burdell alive? During the trial, the two lawyers fight for truth, justice and their careers.

This novel is set against the background of bustling, corrupt New York City, just four years before the Civil War. The author intertwines two main narratives: the trial through the perspective of the defence attorney Henry Clinton, and the story of the lovely young widow Emma Cunningham whose search for a husband brings her into the arms and home of Dr. Burdell.

I have been listening to historical murders for 5 years with Ann Perry being one of my favourite writers. This book is well above my previous reading as it keeps you in it's grip through every word. You are just waiting for the next line to be read to see where it takes you.The reader was first class and kept me at the edge of his next word, he was fluant and firm in all the right places. If you get a chance listen to this book and I hope there are more from the same author.

Whilst I wouldn't say it was one of the most riveting books I have ever read it was easy enough to read and I quite enjoyed it. Narrator was a little strange but as I continued listening he seemed to be right for the part. I think he was trying to portray the more formal and clipped speech that would have been used in the period.

Based on a true story with the author's fictional additions it made the story more interesting.

This was an ok story. I never really engaged with the lead character. I did not really like her and therefore lacked any empathy towards her and the predicaments that she engineered for herself. Although have to admit a grudging admiration for her tenacity. Possibly, I missed the desperation, which probably influenced the decisions she made. I was expecting clever courtroom tactics ? but found these scenes a bit of a let down. I suppose the twist at the end was a bit of a surprise. Found most of the characters a bit bland. The narration was good & overall I enjoyed the experience ? but would not rave about it.

I have many books in my library that I started and simply could not get through. This was not one of them. Good story, interesting characters with depth and decent narration. I would recommend it if you are interested in a fast moving mystery with a bit of history.

Great story with wonderful period detail, but somehow manages to take real characters and suck the life out of them. Ornate prose style badly served by melodramatic narration, with some jarring errors in pronunciation and emphasis. Not worthwhile.