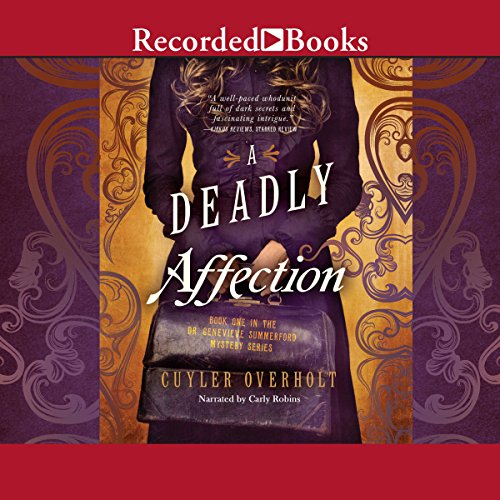 New York City, 1907. At the dawn of the 20th century, Americans believe that science, especially the medical sciences, will soon conquer all of mankind's ills. For a brief time, medical schools open their doors to women, allowing them to join the scientific crusade. Genevieve Summerford is one woman who answers the call.

After a past family tragedy for which she holds herself to blame, Dr. Genevieve Summerford wants nothing more than to succeed in her new career as a psychiatrist, and win back the respect of her family and peers. That goal is thrown into jeopardy, however, when one of her patients is arrested for murder - a murder Genevieve fears she may have unwittingly provoked. Desperate to prove to herself and the authorities that her patient is innocent, she is forced to enlist the aid of an influential Tammany captain who once worked for her family as a stable boy, and whose motives for helping her now are open to doubt.

Forging an uneasy alliance, the two uncover an astonishing secret about one of the city's most powerful families: a secret which, should Genevieve choose to reveal it, could bring down catastrophe on those she cares most about, but which, should she let it lie, will almost certainly send her patient to the electric chair.

I listen to a lot of audio books some where you really have to concentrate others an easy listen this falls somewhere in between. I don't often buy books with an American narrator as it's just a bit harder a listen but this was well worth the extra concentration. Interesting heroine and super when she's talking or narrating but just not so good for some of the other characters.

A little slow in places but a proper story not blindingly obvious going to try the next one now.

strong heroine, a little snark & a dash of romance

Genevieve Summerford was such an interesting character, and her past pulled at my heartstrings. She is passionate and truly ahead of her time. She has been granted permission to meet with a group of women who suffer from illnesses that Genevieve believes are a manifestation of their emotional state. All have suffered a significant loss. During her first meeting, she advises a young woman. Said woman is arrested the next morning for the murder of her doctor. Genevieve worries her advice provoked her patient but upon speaking to the accused, she is convinced of her innocence. Talks with the police soon have her convinced they believe they have their murderer. She decides to help, and the tale that unfolds was excellent and fully developed.

The book is rich with information as Genevieve sets out to investigate. We learn about diseases and get a sense of the political climate as we cross through different social classes. Overholt fleshed out the characters and highlighted obstacles Genevieve faced as a woman in 1900’s. I found all of these tidbits fascinating and admittedly love this period.

The good doctor was refreshing, tenacious but level-headed. She is quite bright and while she makes assumptions she always follows up with hard facts. Her past and the need for her father’s approval hinder her, but we see her transform in this first novel. There is a second chance romance, and while it weaves its way throughout the tale allowing us to connect, it never hinders the investigation.

There were many “ah-ha” moments and things that happened that correlate to the way we do things today. I won’t say as I abhor spoilers, but I can honestly say each made me smile and felt genuine. The mystery concluded after some climatic scenes and we even get a little follow-up. I was delighted that each thread and storyline was addressed leaving no loose ends. I am quite anxious to read more of this mystery series featuring our heroine.

Carly Robins narrated, and she did a terrific job with Genevieve. From her dialect to mannerisms she enhanced my enjoyment. I am hoping she continues to read this series.

Why can't this be a series?

When I finished this, I immediately checked to see if this might be part of a series. So sad that it isn't. Loved the characters and the storyline. I usually don't prefer romance in my mysteries but really enjoyed the Simon character. I figured out the mystery before it was revealed but it didn't matter. It was a good story and the naration was impeccable.

Though some of the language and character features were repetitive, overall the story had a good arc. A little deux ex machina at the end; 1.5 chapters to tie up 33 long chapters seemed a bit rushed. However, the historical details were beautiful and I enjoyed the twist at the end. If another book comes out with this main character, I'll most likely read it (not listen).

Difficult to get into

Probably not. I had trouble getting into this book. In the beginning, it was hard to know where it was going, and the setup was uninteresting, slow going, and all over the map.

If you’ve listened to books by Cuyler Overholt before, how does this one compare?

This is my first one

Who would you have cast as narrator instead of Carly Robins?

Unsure. But her tone didn't seem to match the era. I also had trouble with her overarticulated, melodramatic, singsong, modern voice.

Could you see A Deadly Affection being made into a movie or a TV series? Who should the stars be?

This might be a book better read in print.