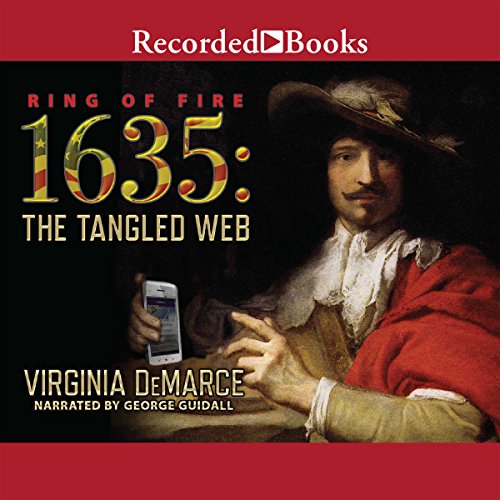 By: Virginia DeMarce
Narrated by: George Guidall
Try for £0.00

Though the Thirty Years' War continues to ravage 17th-century Europe, history as it once happened has been strongly deflected by the new force that is rapidly gathering power and influence: the United States of Europe, an alliance between Gustavus Adolphus, King of Sweden, and the West Virginians from the 20th century, led by Mike Stearns, who were hurled centuries into the past by a mysterious cosmic accident - the Ring of Fire.

The USE has know-how of 20th-century technology, but the American traditions of freedom and justice are having an even stronger impact on Europe, and the rulers of Europe are powerless to stuff the Grantville genie back into the bottle.

Eric Flint is the author of the New York Times best seller 1634: The Galileo Affair (with Andrew Dennis) - a novel in his top-selling Ring of Fire alternate history series. His first novel for Baen, Mother of Demons, was picked by Science Fiction Chronicle as a best novel of the year. His 1632, which launched the Ring of Fire series, won widespread critical praise, as from Publishers Weekly, which called him "an SF author of particular note, one who can entertain and edify in equal, and major measure".

What listeners say about 1635

A lot of material is from earlier Grantville Gazettes. The storyline is very disjointed and very hard to follow along.This is not one of the better books of the series.

This book is the bits and pieces of its sister book that did not fit in the other, but without the assistance of an independent plot to hang them on.

This book is extremely difficult to follow. It seems to jump around in the story line, I'm assuming to view the story from different perspectives. It may have been an attractive idea when writing it, however it does not play out well at all. You end up spending most of the time trying to figure out not only who the story is following at the time, but when the story is occurring. As soon as you think you have a handle on the events, you are thrown back to another perspective that predates everything else.

I finally gave up on the book with three hours left. It might be better after a second or third listening, but on the first listening all it provided me was a headache. :(

Confusing and rather dull

Dozens of characters, multiple barely connected plotlines, and very little action. I listened to the entire thing and I'm not sure I could name a single memorable character or noteworthy event that happened in this particular book. Unless you're a history buff who is _really_ into that particular aspect of the 1632 series I'd recommend skipping this one.

If you could sum up 1635 in three words, what would they be?


What other book might you compare 1635 to and why?

This book like the others of the series is a good listen but it should precede the Dreesden Incident. The other book makes significant references to actions that are covered by this book.

good but a bit disjointed

What happens to support the major characters of the Ring of Fire. Who has to bear the brunt of the consequences of the these events, politics, and policies? The administrators, sergeants, and others on the B-team and C-team character list, of course!!! Because this narrative weaves together threads from the previous books, across almost 5 years of action, this book is best read soon after them, or after re-reading them.

Lots of new characters along with some old favorites. This book's story is centered around the Mainz, Fulda areas and covers the political change along with filling in a lot of back stories.