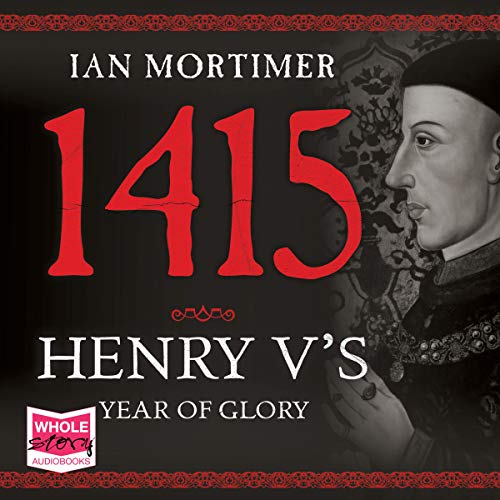 By: Ian Mortimer
Narrated by: James Cameron Stewart
Try for £0.00

Henry V is regarded as the great English hero, lionised in his own day for his victory at Agincourt, his piety and his rigorous application of justice. But what was he really like?

In this groundbreaking audiobook, Ian Mortimer portrays Henry in the pivotal year of his reign. Recording the dramatic events of 1415, he offers the fullest, most precise and least romanticised view we have of Henry and what he did. At the centre of the narrative is the campaign which culminated in the battle of Agincourt: a slaughter ground intended not to advance England’s interests directly but to demonstrate God’s approval of Henry’s royal authority on both sides of the Channel. The result is a fascinating reappraisal of Henry which brings to the fore many unpalatable truths as well as the king’s extraordinary courage and leadership qualities.

What listeners say about 1415: Henry V's Year of Glory

Impressively scholarly but dull at times

I enjoyed the author's biographies of Edward III and Henry IV which are equally scholarly as the present book but to my surprise are more engaging. All the more surprising as Henry V is the monarch with a more heroic reputation. Perhaps it's the structure of the book in that the early chapters deal exhaustively with the theological schism within the Catholic church resulting in there being three Popes, two of whom were ultimately disposed. Thereafter the book becomes an almost day by day account of the King's life during 1415 in the run up to his 'triumph' at Agincourt with details about his manoeuvrings to get money to pay for his forays into France and exhaustive preparations for war that involves the descriptions of inventories and lists. All is worthy erudition but makes for a somewhat dull listen. The best section is from the siege of Harfleur up to and including the battle of Agincourt.

My previous favourable image of Henry V, largely based on Shakespeare's play, has been overturned by this book and I now see him as a vain man driven by a religious zealot's belief that he is doing God's Will and that God is on his side even when he's killing prisoners of war and murdering completely innocent women and children and children. In his selfish pursuit of power and self-aggrandisement he invaded France but impoverished England in the process He gave lavishly to fellow nobles but disgracefully reneged on the last payments payments to his soldiers who bore such hardships trekking across France and fought so bravely to give him his victories yet he regarded them as merely his chattels obliged to obey his will.

The book ends with the author's arguments in favour of his novel approach to telling history.

The narrator is excellent.

At the start, I found myself wondering if I'd get into this book. By the end I wanted more history in this format.

The day by day style has it's dull moments, mainly at the beginning, but its strength is that it gives an extremely honest account of history. The attention to detail sheds brighter light upon historical figures from this incredible year. It builds a picture of Henry V almost free of the bias of nationalism.

This is history for people who want to know EXACTLY (as close as we can get) what happened.

Great content and you really do come to understand the king not just throughout the year but his reign. In parts the language comes across as arrogant when arguing his position against other historians which can take away from the focus of the book.